Evernote founder Stepan Pachikov is a Russian emigre who grew up in the USSR police state, and now splits his time between Silicon Valley and New York. Pachikov developed the handwriting engine in the Apple Newton and pioneered virtual reality.

In 2002, Stepan first thought of creating Evernote because he was a smart guy with a terrible memory. He dreamed of a way to make a copy of your entire brain, capturing information and thoughts at the speed at which we think.

Now Pachikov, who now suffers from Parkinson's Disease, dreams of immortality by uploading all memories to artificial intelligence.

It's an intriguing idea -- today's dreams of mind uploading rely on magical brain scanning. But what if a future AI could just sweep up all the information you have on your PC and in various clouds -- all your emails and photos and text messages, all your Facebook interactions and Instagrams -- everything -- and reassemble all of that into a digital you? Sure, it would only be a simulation of you. But you are now only a simulation of the person you were ten years ago. 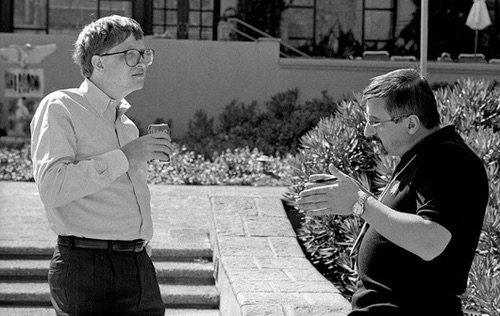 I use Evernote every day.

On the morning of September 11, 2001, Stepan Pachikov gazed out of the window of his Manhattan apartment and beheld a horror. He was living, as he does now, on the 44th floor of a sprawling West Side apartment complex, his ever-present camera trained on the skyline, giving him a bird's eye view of the terror attack that was about to rock the world. He watched as a jumbo jet careened toward the second tower of the World Trade Center, his finger on the shutter. At the moment of impact, he responded instinctively. He pushed the button.

It's not a surprise that Pachikov's natural response to such an event would be to preserve the memory. As the inventor and founder of Evernote, Pachikov's life work has been the human memory, untangling personal thoughts from the greater narrative of history, and then putting the particles back together again for future generations. It's an obsession that goes back to his youth, before the collapse of the Soviet Union. Though he was at the forefront of the Information Age ushered in by the personal computer, Pachikov was sharply aware of another revolution in his midst. In the late 1970s and early 1980s, the Soviet culture he had grown up with was deteriorating. As a lifelong fan of culture, history, and the arts, Pachikov knew that without a way to preserve memories, entire cultures could evaporate. Pachikov saw computers as a way to save those memories

kq4ym 7/11/2017 | 11:57:03 AM
Re: Black Mirror episode... I've never found a real use for Evernote and sometimes wonder if I'm missing something. But, the idea of recording all of life has intrigued me for years though. Although there's no telling what technology might do with all the data, it would seem to me that those old Justin'tv like videos of lifecasting one's day and night had a germ of something important, i not only at least to document a history to one's family long after we're gone.
Reply | Post Message | MESSAGES LIST | START A BOARD

Susan Fourtané 7/9/2017 | 10:00:25 AM
Re: Black Mirror episode... Daniel -- You don't have to worry at all. I have been an Evernote user since November 2011. Evernote makes money. I believe one of the secrets of Evernote's success is its transparency. Everynote offers a great service in all its three versions: Basic (free), Plus (I have this one), and Premium. For the price of a Starbucks coffee per month (or less) it's more than worth it to upgrade. I used the Basic version for quite a long time before upgrading to Plus. I never regretted about it. It's one of those apps that I really love. Even in the Basic version Evernote offers a lot. Those who upgrade to Plus and Premium is because not only they are super happy with the application but also because their needs are different. After using the Basic version, you can really see if Evernote is for you or not, or how much you really need of all the many features Evernote offers. Some years ago, I met Paul Libin, Evernote's co-founder, back then Evernote's CEO, and current Executive Chairman. He told me that Evernote was not conceived as a business at the beginning, and that was one reason why they wanted to make Evernote accesible to everyone. Is Skitch the only thing you use?
Reply | Post Message | MESSAGES LIST | START A BOARD

mhhfive 7/8/2017 | 1:40:57 AM
Re: Black Mirror episode... Science fiction is becoming reality faster than anyone might have guessed. Black Mirror seems to be "15 minutes into the future" a bit more than other shows. Max Headroom didn't quite predict reality TV that accurately....
Reply | Post Message | MESSAGES LIST | START A BOARD

Mitch Wagner 7/7/2017 | 8:21:19 PM
Re: Black Mirror episode... Reminds me more of the episode where the woman digitally resurrects her boyfriend.
Reply | Post Message | MESSAGES LIST | START A BOARD

It's already making money.. using the "Freemium" business model that actually works for plenty of other services, like Dropbox and Mailchimp.

Basically, if you do freemium right, you don't piss off your customers by charging them for what they don't need. Customers are happy to pay a reasonable amount for features that they really want to pay for.

The free versions act as their marketing pipeline.. getting users hooked on the quality of the service/product. If you never use anything but their free versions, then you're not really their target audience. You're just a casual user. Maybe they could have gotten you to "pay for a trial" -- but you probably would never have returned to pay again.

You're probably quite happy using Skitch for free... and maybe someday, you'll need to use some feature that isn't free -- and then you'll shell out for it because there's some "guilt" that you've been using the free product for so long? Or not.
Reply | Post Message | MESSAGES LIST | START A BOARD

danielcawrey 7/5/2017 | 3:37:50 PM
Re: Black Mirror episode... I worry about the future of Evernote as a standalone company. I use Skitch, the company's screenshot software, but only the free version.

mhhfive 7/5/2017 | 10:02:37 AM
Black Mirror episode... This sounds like an episode of Black Mirror where most everyone has an implant that lets them record and review everything they've seen/heard. While it sounds like a cool technology, there is a creepiness to it as well -- if the tech is abused for errant behavior or used to obsess over painful memories. Capturing 9/11 in a digital memory sounds like a kind of nightmare scenario where you might then have to debate whether or not to delete that memory instead of being able to have the memory naturally fade.
Reply | Post Message | MESSAGES LIST | START A BOARD
EDUCATIONAL RESOURCES