For check printers, the writing is on the wall. People are still writing plenty of checks, but less than they used to. Like typewriter repair shops and vinyl record stores, the business of printing paper checks is a good one to get out of.

That's put pressure on Deluxe Corp., of Shoreview, Minn. "We were at one time the country's largest check printer," Brad Skeel, senior manager, enterprise cloud operations and engineering, tells Enterprise Cloud News. Over the last ten years, the billion-dollar company has been transforming to providing marketing and other services to small businesses and financial institutions.

Through a series of acquisitions and organic growth, Deluxe provides logo design, website and email hosting, search engine optimization, email marketing and more -- "all the kinds of services you can need if you're a small business owner," Skeel says. 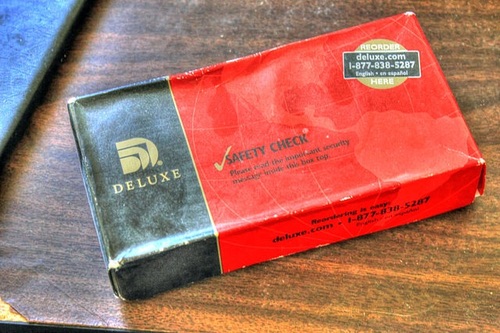 Deluxe offers big data analytics to help banks with customer retention and providing additional banking services to their customers. And Deluxe has a direct-to-consumer business as well: They still print checks.

Deluxe chose VMware Inc. (NYSE: VMW) both for security and flexibility -- it wants the ability to extend into the public cloud which VMware provides, Skeel says.

With private cloud, Deluxe has saved 30-40% both on productivity and hardware costs. The company pays for hardware on demand, rather than purchasing outright, for cost savings.

Deluxe started moving to the cloud in about May 2014. "That's when we started cloud discussions in earnest," Skeel says.

Deluxe met with EMC Corp. (NYSE: EMC), and reviewed multiple cloud management platforms and hypervisor options. It was already a VMware shop, but hadn't decided on VMware as the cloud platform. The company looked at OpenStack, and other options as well. "We felt after doing the evaluation that the VMware stack gave us the best leg up to start building a true cloud, without having to do a lot of programming," Skeel says.

Skeel is using "technical debt" in the same way other IT executives refer to "legacy." In Deluxe's case, that's old Sun Microsystems servers running old versions of the Solaris operating system, "practically every flavor of Oracle," mainframes, and IBM servers running the AIX operating systems, Skeel says. Deluxe is working to get those workloads onto platforms supported by the cloud.

In addition to cost savings, the cloud migration has paid off in agility. Getting a new virtual machine running for business used to take four to six weeks; now it's under a week, Skeel says. "I'll be happy when it's fully automated and we can deliver workloads in minutes," he says.

Deluxe is working to embrace DevOps, "getting incrementally closer to that kind of style," Skeel says.

Looking back, Skeel says the company's biggest challenge has been getting support for the platform. "We went all in building the cloud and could have spent more time drumming up and getting people excited about it," he says. "We stood it up and said, 'We're ready to have people migrate in,' and they said, 'Why should I do this? What's in it for me?'"

Deluxe employees initially resisted the migration to cloud, and required a lot of education, internal seminars, lunch-and-learns. The work got easier as the cloud began to show positive results, and business began to support it, Skeel said. "The message spread that we get things done fast," Skeel said.

And Comcast is using a private cloud based on Cloud Foundry to turn around some of the worst customer satisfaction scores received by any US company, while IBM is working with Lloyd's Banking Group to move that financial institution to a private cloud. (See Comcast Looks to Beat Customer Hate With Private Cloud and Lloyds Inks £1.3B Cloud Deal With IBM.)

Susan Fourtané 7/7/2017 | 4:57:46 AM
Re: Organic digital transformation John -- You made me laugh. :D Of course you are not going to go complaining about those paper checks to the people who love writing paper checks with your name on them, especially if it's easy for you to cash them. If it were me, it would not be so easy. Paper checks have been extinct in some places in Europe for decades. Cashing one requires lots of buracratic efforts and a significant amount of money to pay to the banks for bringing them such trouble. Financial digital transformation hit some places earlier and stronger than others.
Reply | Post Message | MESSAGES LIST | START A BOARD

JohnMason 7/7/2017 | 3:15:36 AM
Re: Organic digital transformation Interesting point. On the other hand, one of the banks I use is very small. We pretty much know each other there the way the grocer and I know each other (yes, I still have a grocer). There is a lot to be said for old ways of business, especially if they can be sped up with modern methods while not sacrificing the personal touch. I even use a fountain pen now and then, just for the feel of it (and my iPad can digitize what I write with the touch of a button).
Reply | Post Message | MESSAGES LIST | START A BOARD

JohnMason 7/7/2017 | 3:08:33 AM
Re: Organic digital transformation A worthy point to consider, but the people who write checks to me like checks, so I do not want to argue with them!
Reply | Post Message | MESSAGES LIST | START A BOARD

kq4ym 7/6/2017 | 11:23:54 AM
Re: Organic digital transformation Although I'm certainly writing lots less check than the past, I hadn't given much thought how check companies like Deluxe would have to move with that trend. Since we can now pay online there's really not much use for those paper check for most of us I'm guessing. Although I still have and play cassettes for music I've accumulated over the years, I can't imagine paper checks making a comeback, but who knows?
Reply | Post Message | MESSAGES LIST | START A BOARD

Susan Fourtané 6/30/2017 | 8:40:28 PM
Re: Organic digital transformation John -- I think having an app to submit a check electronically to your bank by taking a picture of it is great. However, I can't stop wondering what's the point of a paper check. Isn't it a waste of time, effort, and resources? -Susan
Reply | Post Message | MESSAGES LIST | START A BOARD

JohnMason 6/30/2017 | 6:43:26 PM
Re: Organic digital transformation Well don't forget that I'm talking about turning a paper check into an electronic payment instantly by just taking a picture of the check and submitting the picture electronically to the bank. My bank does that!
Reply | Post Message | MESSAGES LIST | START A BOARD

[email protected] 6/30/2017 | 5:58:03 PM
Re: Organic digital transformation It may happen turntables were one of the hottest selling items on Amazon this past holiday season. Sadly I didn't keep my cassettes I used them primarily in my car and they got warped easily by extreme temperatures. I was at a concert last night and the musician was joking about flipping over the cassette to the second side my daughter had no idea what he was talking about!
Reply | Post Message | MESSAGES LIST | START A BOARD

[email protected] 6/30/2017 | 5:55:50 PM
Re: Organic digital transformation It can for some institutions my bank can stop an online payment for free but there is a charge to stop a physical check. Additionally, the process of printing a check and mailing a check has to be included.
Reply | Post Message | MESSAGES LIST | START A BOARD

JohnMason 6/30/2017 | 4:41:58 PM
Re: Organic digital transformation My bank lets me deposit checks by just taking cell phone pictures of the checks, using the bank's app. Easy, and as fast as clicking a button. What that means is that writing a paper check does not involve a transaction penalty in terms of time or effort.
Reply | Post Message | MESSAGES LIST | START A BOARD