SANTA CLARA, Calif. -- Cloud Foundry Summit 2017 -- Comcast is leveraging a private cloud platform based on Cloud Foundry to turn around some of the worst customer satisfaction scores received by any US company.

Comcast's private cloud services platform is helping the company slash the duration of customer problems, speed up its ability to resolve problems when they do occur, and significantly reduce the amount of time customers have to spend dealing with the MSO's service reps, company executives said in presentations Tuesday and Wednesday.

How bad is Comcast Corp. (Nasdaq: CMCSA, CMCSK)'s customer satisfaction problem? The company received the lowest Net Promoter score of 315 US companies across 20 industries, as measured by the Temkin Group in October. It was the second year running that Comcast came in last -- although Comcast is simultaneously seeing great financial results. (See Comcast Reaches for Xfinity & Beyond.) 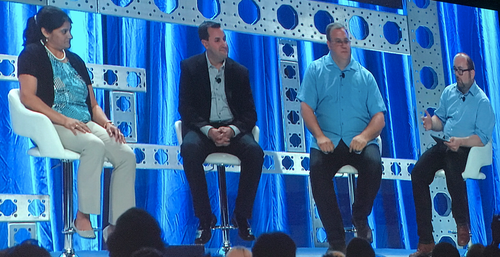 "Cable companies are among the most hated companies in America," says Alan Breznick, cable/video practice leader for Enterprise Cloud News' sister site, Light Reading, and contributing analyst for our research arm, Heavy Reading. And Comcast ranks near the bottom of that pack. "They have become the poster child for bad customer service," he noted.

And yet: "We know that when our product is working, people love our products," said Greg Otto, Comcast's executive director for cloud services, at a presentation Wednesday. "We're a premium product and our customers expect a premium experience. Folks interact with our product [including always-on Internet and video services] more than any other product I can think of."

The cloud platform is helping create "significant gains" in customer experience, Otto said. There's still "lots of work to do," but Net Promoter scores are improving in "big strides," he said.

When Comcast started work on its private PaaS cloud in 2014, its IT staff promised the company's leadership that it would deliver a 40% reduction in the amount of time applications were affected by problems, Otto said. That seemed ambitious at the time -- but in reality, the PaaS is delivering 81% reduction, with resolutions coming twice as fast when issues do come up, and frequency of occurrences reduced by half.

Transaction growth has nearly tripled to more than 210 million transactions per day, up from tens of millions last year. But "even with that insane, ridiculous growth we have," IT is spending less time managing and running the platform and more time with developers and understanding their needs, Otto said.

"Even my wild expectations were far surpassed," Otto said.

Other metrics: Comcast has improved time to market by about 50% using the private PaaS cloud.

And developer productivity has improved by 50-75%. These developers are more productive because they are not assembling infrastructure pieces, and instead they're getting applications to market twice as fast, Otto said.

"Our development team craved that independence," said Christopher Tretina, Comcast director of technical architecture. "Any initial hesitation was washed away. Moving to this platform was a reward, something they wanted to do in order to provide more business value faster."

The platform supports more than 1,500 developers and over 12,000 application instances.

When the company started rolling out the customer service platform, it faced business challenges, Tretina said. Comcast lacked a standard language to communicate with business partners about the impact of incidents. "Additionally we had stark divisions -- we were very siloed between developers, application folks and testers," he said. Comcast also wanted to train engineers, without solid plans for doing that. And IT couldn't move at the fast pace demanded by the business side.

For starters, IT agreed with its business partners on a common language for communicating customer effect when applications had problems. That was needed to put the business case in front of executives and gain funding, Tretina said.

IT realigned to create DevOps teams, and then added testers to those teams to be able "to deliver complete, end-to-end business value," he said.

The Slack channel made it easy and natural for developers to share their work. All told, nearly 800 people are on Slack, Otto said. "Development teams that normally would never talk to each other on totally different products are collaborating on a real-time basis, sharing best practices and helping each other out," he said.

What's next for Comcast? The company wants to use Cloud Foundry to enable multi-cloud connectivity, running private cloud and connecting to multiple cloud providers. "We think the abstraction Cloud Foundry provides can give us the ability to do that," Tretina said. (See Google & Microsoft Tout Multi-Cloud, but Where's Amazon?.)

The company also wants to adopt a "digital first" strategy, giving customers the ability to interact on digital channels, including smartphones and its Xfinity service, as "the first line of defense," Tretina said. Comcast now receives 300 million phone calls a year from customers. "That's a lot of customer interactions from customers who I'm sure would prefer to interact with us through digital means," Tretina said.

Michelle 6/30/2017 | 11:05:31 PM
Re: Digital First.. How will we know when the transformation is complete? Will we have digital butterflies or something?
Reply | Post Message | MESSAGES LIST | START A BOARD

kq4ym 6/26/2017 | 9:27:18 AM
Re: Digital First.. It will be interesting to watch to see how Comcast fares in the projects. Seeing that in customer service "Comcast came in last -- although Comcast is simultaneously seeing great financial results," one might wonder if that carrot of great financial results might drive them realistically in that direction over moving to spending in customer service.
Reply | Post Message | MESSAGES LIST | START A BOARD

However, I don't think Comcast has handled certain incidents correctly. They need to do a better job servicing the customer. I'm not sure there is a technology that can properly help them do that.
Reply | Post Message | MESSAGES LIST | START A BOARD

mhhfive 6/15/2017 | 7:22:57 PM
Digital First.. I'm hoping the "___ First" as a buzzword trend doesn't catch on. Ugh. Everyone should prioritize "digital" as much as it pertains to their business. Sure, media and networking companies need to be "digital" -- but it's become almost meaningless.
Reply | Post Message | MESSAGES LIST | START A BOARD
EDUCATIONAL RESOURCES