On Tuesday's quarterly earnings call, an analyst asked Cook about reports that Trump had claimed that Cook had promised to build three manufacturing plants in the US. (See Apple Shines in Cloud & Enterprise.)

Cook did not respond directly to Trump's claims -- which appeared in The Wall Street Journal late last month -- but he instead talked about how Apple has created 2 million jobs in the US. 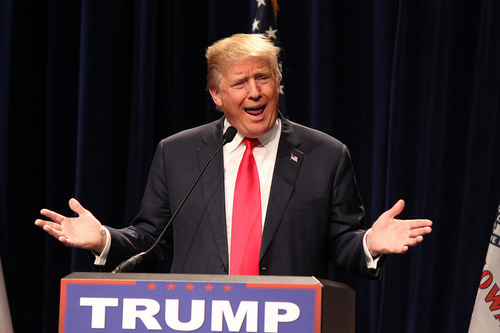 "We do view that we have a responsibility in the US to increase economic activity, including increasing jobs, because Apple could only have been created here," Cook said.

About three quarters of those jobs are app developers, and Apple Inc. (Nasdaq: AAPL) is working on K-12 and secondary education programs to teach app development, Cook said. This is "the largest contribution Apple can make... because this is the largest growing job segment in the country," Cook said.

Secondly, Apple has purchased $50 million in goods and services from US suppliers, with a "significant portion" being manufacturing related, Cook said. Apple is looking to increase those. The company announced an advanced manufacturing fund at the beginning of the quarter, with initial funding of $1 billion, and $200 million already deployed. The first recipient is Corning, in Kentucky, which is expanding a plant to make innovative glass. Apple is purchasing the glass to export around the world with iPhones and iPads, Cook said.

And two thirds of Apple's own employee base is in the US, even though only a third of the company's revenue comes from here.

"That's what we're doing from a job growth point of view, and we're very proud of that," Cook said.

Apple came under fire from Trump last year on the campaign trail, for doing much of its manufacturing in China rather than the US.

kq4ym 8/22/2017 | 3:02:39 PM
Re: Don't get dragged into politics, Apple! It does sound like companies now have to protect themseleves from bad mouthing from the White House, and the two million jobs created may help that situation although as noted, "About three quarters of those jobs are app developers."
Reply | Post Message | MESSAGES LIST | START A BOARD

Susan Fourtané 8/3/2017 | 10:33:28 PM
Re: Don't get dragged into politics, Apple! Thats a big problem. I dont see why a company has to spin their plans and projects to please the preseident. Who does he think he is to tell everyone how they have to run their business? I dont see anyone telling the president how to run the country.
Reply | Post Message | MESSAGES LIST | START A BOARD

mhhfive 8/3/2017 | 1:24:31 PM
Re: Don't get dragged into politics, Apple! Unfortunately, it seems no business is safe from a presidential tweet these days, so the new normal is to try to spin existing plans and projects to make them look like they're following the presidential decrees.

Ford, Carrier and now Apple are all trying to sound like they're "boosting jobs" when their actual strategies have not really changed.
Reply | Post Message | MESSAGES LIST | START A BOARD

Susan Fourtané 8/2/2017 | 6:45:41 PM
Re: Don't get dragged into politics, Apple! Phil  I agree. I Apple, or any company for that matter, shouldnt be dragged into politics. I dont think Trump has the right to get into Apples way of doing business. He doesnt have a saying in Apples business.
Reply | Post Message | MESSAGES LIST | START A BOARD

mhhfive 8/2/2017 | 1:31:33 PM
Re: Don't get dragged into politics, Apple! I think the Mac Pro is assembled in Texas -- but the actual significance of that isn't really huge. So it would be a bit awkward to highlight such a small part of Apple's business when doing so would just highlight what Apple *isn't* doing in the US.

danielcawrey 8/2/2017 | 1:18:53 PM
Re: Don't get dragged into politics, Apple! There continues to be chatter about Apple building manufacturing here.

Whatever happened to the Mac Pro being built in Texas? I know it was assembled there at some point, but other than hearing about it initially I haven't heard anything else.
Reply | Post Message | MESSAGES LIST | START A BOARD

You're right, but of course, Apple will "spin" any of its hiring plans to make it seem like they are doing the patriotic thing.... We'll see what happens if the IRS changes its rules about bringing $$ held offshore back into the US.
Reply | Post Message | MESSAGES LIST | START A BOARD

Phil_Britt 8/2/2017 | 2:56:27 AM
Re: Don't get dragged into politics, Apple! THe best thing Apple can do is hire or not hire based on its own needs, and I think Tim Cook has shown that's what the company will do, Trump or no Trump.
Reply | Post Message | MESSAGES LIST | START A BOARD

mhhfive 8/1/2017 | 9:37:04 PM
Don't get dragged into politics, Apple! Apple is in a tough spot. If it says nothing about plans to build a plant, it is going to anger president supporters. If it does, it'll be the target of bullying forever.
Reply | Post Message | MESSAGES LIST | START A BOARD
EDUCATIONAL RESOURCES