In the hottest competition since The Bachelor, Amazon said Thursday it has narrowed its list of candidate cities for its second headquarters to 20 finalists in the US and Canada.

"In the coming months, Amazon will work with each of the candidate locations to dive deeper into their proposals, request additional information, and evaluate the feasibility of a future partnership that can accommodate the company's hiring plans as well as benefit its employees and the local community," the company says. "Amazon expects to make a decision in 2018." 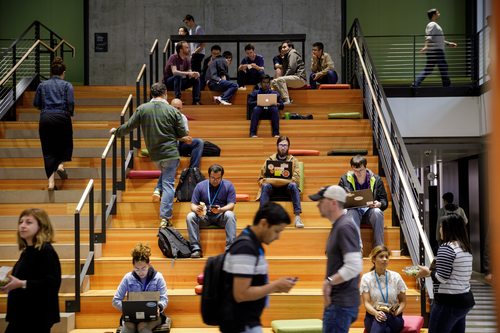 Twenty North American cities are competing to get excellent stairs like these. Photo by Amazon.
Keep up with the latest enterprise cloud news and insights. Sign up for the weekly Enterprise Cloud News newsletter.

The company adds, "Amazon HQ2 will be a complete headquarters for Amazon, not a satellite office." Amazon says it will invest more than $5 billion and grow the second headquarters to up to 50,000 "high-paying jobs." In addition to Amazon's direct hiring and investment, construction and ongoing operation of Amazon HQ2 will create tens of thousands of additional jobs and tens of billions of additional investment in the surrounding community.

Amazon has more than 540,000 employees worldwide.

Amazon launched its search for a second headquarters in September, and received 238 entries.

Candidate cities in the final 20 are concentrated heavily in the US Midwest and Northeast, with only one on the US West Coast, in Los Angeles, and one outside the US, Toronto, Canada. Amazon's current HQ is in Seattle, in the US Northwest.

Clusters include three in the Washington, D.C. area, two in Texas, and two in the New York metropolitan area -- New York, N.Y. and neighboring Newark, N.J. 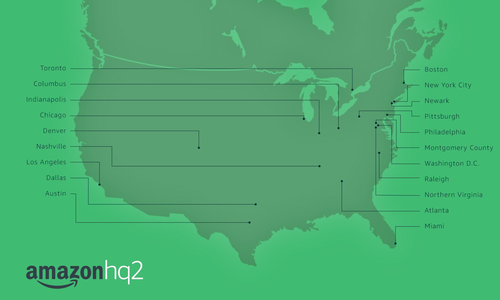 Amazon maps out the top 20. Click here for a bigger version of this map. Image: Amazon

The 19 US candidate locations are split almost evenly along political lines, GeekWire notes -- ten in red states from the 2016 election, nine in blue.

Skeptics said cities were being too generous promising incentives to get Amazon -- or other big businesses -- to relocate there. "In an age where cities and states are starved for resources, often times these efforts at economic development, the costs of tax breaks for the city, will far outweigh whatever benefits come from the number of jobs created," Margaret O'Mara, a University of Washington professor specializing in urban history, told GeekWire.

"Amazon's quest for a second massive corporate base is reminiscent of Boeing's ongoing efforts to ship jobs out of the Seattle area and hold us hostage," Seattle City Council member Kshama Sawant said in a statement in September. "For decades, Boeing executives and billionaire shareholders have carried out systematic economic extortion by pitting cities and states against one another, forcing a race to the bottom for the living standards of workers, and crushing labor unions."

Amazon's search for a second headquarters incited a wave of publicity stunts by cities looking to woo the company, according to the New York Times.

"A business group in Tucson trucked a giant cactus to Amazon in Seattle, and the mayor of Washington buttered up Amazon in a promotional video in which she called it the 'most interesting company in the world,'" the Times says. "An economic development group in Calgary, Alberta, took out an advertisement in The Seattle Times in which it offered to fight a bear for Amazon and spray-painted Seattle sidewalks with a humorous promise to change the city's name to Calmazon or Amagary."

More seriously, New Jersey promised $7 billion in tax incentives to bring Amazon to Newark, according to the Times. And officials in Chicago offered Amazon tax credits to let the company keep about $1.32 billion in income taxes that employees would ordinarily pay to the state, according to a report in the Chicago Reader.

So, sure, a "surface city" could well be what it is.
Reply | Post Message | MESSAGES LIST | START A BOARD

[email protected] 1/26/2018 | 6:24:19 PM
Re: Amazon I am betting it will a surface city and the negations from here are all the gain the best deal. I do think Miami might be an issue since their public transportation isn't as mature and 50,000 cars in downtown Miami could be an issue.
Reply | Post Message | MESSAGES LIST | START A BOARD

In any case, however, it kind of doesn't matter. Let's stop calling it HQ2, because it's NOT going to be a real headquarters, as far as I can tell. It's just a really, really big branch.

mikeroch 1/25/2018 | 7:49:22 AM
Re: Amazon Amazon has been going great now on, but when I mention I live in Illinois and my ex-governors make my license plates, it usually gets a smile/chuckle (and isn't far from true).
Reply | Post Message | MESSAGES LIST | START A BOARD

[email protected] 1/24/2018 | 12:38:34 PM
Re: Amazon Joe interesting perspectives all around I do agree that the courting process was all about what they could garner and they probably already had a short list. Now its more about pitting one location against another. I honestly don't expect a major metro area to win such as new york because of the operating costs but time will tell.
I expect that one of those peripheral to a metro area will be chosen to manage costs talent and the number of people expected to live there.
Reply | Post Message | MESSAGES LIST | START A BOARD

Joe Stanganelli 1/23/2018 | 11:39:30 PM
Re: Amazon Atlanta is a hub, but I feel Austin has a better chance -- particularly because of its already techy/hipster population combined with the fact that its already the location of the HQ of Whole Foods.

My stomping grounds of Boston are up there too. I hope it's not Boston. Commuting is bad enough -- both on the roads and on the MBTA -- without adding over 100,000 new workers to the mix. Ugh.
Reply | Post Message | MESSAGES LIST | START A BOARD

Joe Stanganelli 1/23/2018 | 11:37:21 PM
Real estate Wherever they pick, the primary benefit to inure to people in the area is going to come in the form of an enormous residential real-estate boom.

Well, benefit to homeowners and real-estate investors, in any case. For first-time homebuyers and people looking to relocate and buy, not so much.

Joe Stanganelli 1/23/2018 | 11:35:13 PM
Re: Amazon @kq4ym: While I don't disagree with the idea of rehabilitation in such a way, I would quibble with the issue of my tax dollars being used in yet another way to so directly support Amazon.

But, then, they already have rehabilitation programs that support private businesses. So, indeed, what makes Amazon so different in this regard?
Reply | Post Message | MESSAGES LIST | START A BOARD

Joe Stanganelli 1/23/2018 | 11:34:00 PM
Re: Amazon @mhh: It's just a gimmicky marketing/PR label for a large-ish campus. The legal effect is likely to be nil.* It's just their pageantry to court big tax breaks and other significant incentives as they play all of these municipalities off of each other.

* DISCLAIMER: Obviously, not legal advice or the formation/affirmation/implication of an attorney-client relationship. Nothing I post here qualifies as any of that, and you'd be a fool to think so.
Reply | Post Message | MESSAGES LIST | START A BOARD

kq4ym 1/23/2018 | 9:32:39 AM
Re: Amazon That might make an interesting social experiment, have incarcerated folks work at fulfullment centers where it might be fairly easy to secure such large buildings while making training a part of rehabilitation. There might even be found a sense of pride in working for Amazon vs. the making of license plates!
Reply | Post Message | MESSAGES LIST | START A BOARD
Page 1 / 2   >   >>
EDUCATIONAL RESOURCES
sponsor supplied content
IDC Whitepaper: Key Considerations When Operationalizing Artificial Intelligence Strategy
Design Guide: best-in-class hybrid IT infrastructure with AWS Outposts
Blueprint: optimize data exchange with AWS Outposts
Ericssons Cloud RAN e-book: A comprehensive guide to adopting, deploying, and scaling virtualized 5G in your networks
The Four Key Components of Cloud RAN
How to get the most out of 5G mid-band in Cloud RAN
QCT Introduces New Innovative Family of Edge Servers for the Telco Marketplace.
TOOL - Interactive Experience: Learn how to Evolve your Architecture and Monetize Next Generation Metro and Edge Networks
Whitepaper  Achieving IP/Optical Convergence: Building from Existing Networks
Executive Guide  Enabling Next-Generation Metro and Edge Networks for Communications Service Providers
Educational Resources Archive
More Blogs from Wagners Ring
Podcast: Don't Call Us an SD-WAN Provider  Cato Networks