HPE Cranks Up The Machine at Discover

LAS VEGAS -- HPE Discover -- It's been nearly 13 years since the concept of The Machine appeared on a white board at HP Labs, and now Hewlett Packard Enterprise is taking the first real steps to bring commercial applications to its in-memory computing system.

At its Discover user show here, HPE offered some additional details about the progress it's making with The Machine, including collaborative research projects with the German Center for Neurodegenerative Diseases to look into diseases such as cancer and Alzheimer's.

Although HPE offered a broad update about The Machine in May, Mark Potter, the CTO of HPE and the director of HP Labs, spoke about how the company is starting to develop commercial applications that can run on the systems, specifically in healthcare, big transportation projects and space exploration.

"We proved that the architecture has incredible merit, and we have a system that has the single largest in-memory computing system on the planet with 160TB up and running with real applications," said Potter during a session on June 6. 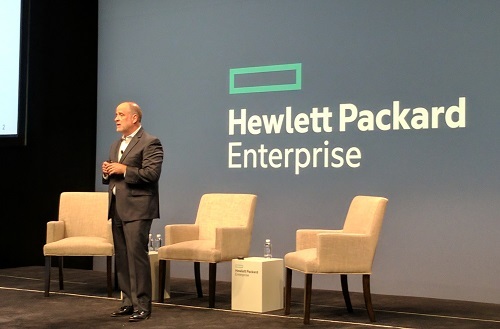 Mark Potter, the CTO of HPE and the director of HP Labs, speaking at Discover (Source: ECN)

Since one of the main limits to conventional computing is bottlenecks in the memory, The Machine breaks memory up into multiple subsystems, which can speed up applications such as databases without having to add more and more transistors onto conventional CPUs to speed up the computing.

HPE has already tried to run different workloads on The Machine to see what types of improvements in-memory computing can provide. Some examples include running big data applications from Hortonworks, as well as better-known apps from Microsoft, such as Excel.

However, the company has its sights set on much larger issues, such as machine learning, artificial intelligence, as well as collecting data from Internet of Things (IoT) sensors and analyzing that data on the edge of the cloud, while providing efficiency and security.

This is one of the reasons German Center for Neurodegenerative Diseases (DZNE) asked to see if The Machine could speed up their research. Dr. Pierluigi Nicotera, chairman of the Executive Board, and Dr. Joachim Schultze, director of the Genomics Department, spoke of how, in two weeks, they were able to increase their compute power seven times compared to the older systems they were using.

Schultze spoke of carrying around data in hard disk drives, and with a global organization, it made for a lot of inefficiencies. The Machine eliminated that.

However, the keep building commercial applications, HPE needs collaborators. At the show, the company announced The Machine User Group, the accelerate the development of application for the company's in-memory technology.

Kirk Bresniker, chief architect at HP Labs and the main force behind The Machine, noted that so far, with about 20 partners, "We have made really good progress and we're all 100% aligned on the goals."

mhhfive 6/8/2017 | 3:34:51 PM
What is The Machine? I guess I'm a bit fuzzy on what exactly the Machine does? It's not instantly something that clicks in my mind...
Reply | Post Message | MESSAGES LIST | START A BOARD
EDUCATIONAL RESOURCES