HPE & Stephen Hawking Will Explore the Cosmos With Superdome Flex

Even Stephen Hawking can use some help when looking for the origins of space and time.

At its Discover customers' show in Madrid this week, HPE announced a partnership with Hawking's Centre for Theoretical Cosmology (COSMOS) and the faculty of mathematics at the University of Cambridge to use the company's Superdome Flex in-memory system for research into the origins of the universe.

For years, HPE, along with its research division -- HP Labs -- has extolled the value of in-memory systems as a way to overcome the limits of conventional computing. The Superdome Flex creates a pool of memory that is accessed by compute resources over a high-speed data interconnect to process information much faster compared with sending data to a traditional storage systems. 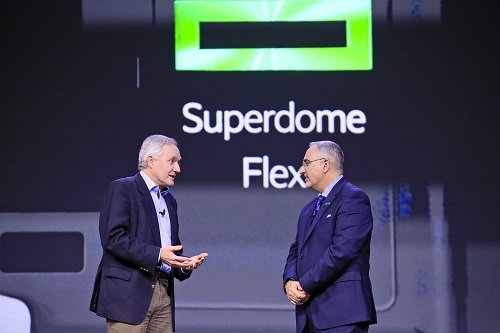 Specifically, the Superdome Flex system can scale from four to 32 sockets and offers 48TB of shared memory.

Since one of the main limits to conventional computing is bottlenecks in the memory, in-memory systems break data into multiple subsystems, which can speed up applications.

The concept of in-memory computing is much the same as HP Labs used to develop The Machine, which the company is now working on creating commercial applications for in healthcare, as well as other fields. (See HPE Cranks Up The Machine at Discover.)

Other companies, notably SAP with its S4 HANA offering, have also looked to in-memory computing to help speed up a variety of different applications. (See Microsoft & SAP Expand Their HANA, Azure Partnership.)

The HPE and COSMOS agreement, which was announced on November 28, will now put in-memory computing to the test. Researchers plan to combine the Superdome Flex with an HPE Apollo supercomputer and Intel Xeon Phi systems to explore mysteries ranging from black holes to the origins of the universe.

Founded in 1997, Hawking and other cosmologists and researchers created COSMOS to explore fields ranging from cosmology, to astrophysics, to particle physics.

In a statement, Dr. Paul Shellard, director of the Centre for Theoretical Cosmology and head of the COSMOS group, noted that the Superdome Flex system will now allow researchers to better exam complex data sets and crunch those numbers much faster:

The influx of new data about the most extreme events in our Universe has led to dramatic progress in cosmology and relativity. In a fast-moving field we have the twofold challenge of analyzing larger data sets while matching their increasing precision with our theoretical models. In-memory computing allows us to ingest all of this data and act on it immediately, trying out new ideas, new algorithms. It accelerates time to solution and equips us with a powerful tool to probe the big questions about the origin of our universe.

Other researchers noted that in-memory systems have applications beyond astronomy.

"High performance computing has become the third pillar of research and we look forward to new developments across the mathematical sciences in areas as diverse as ocean modeling, medical imaging and the physics of soft matter," Nigel Peake, the head of the Cambridge Department of Applied Mathematics and Theoretical Physics, noted in the announcement.

This is not the first time that HPE is testing the limits of supercomputing and high-performance systems. In August, the company, along with NASA, sent the Spaceborne Computer to the International Space Station to explore the limits of what a HPC system could do in space. (See HPE Blasting Spaceborne Supercomputer Into Space.)

Michelle 12/12/2017 | 7:56:02 PM
Re: space The change in computing power is facinating. It's amazing we made it to the moon when we did. A lot of brain power made that happen -- so impressive. It would be good if we could use computing power and some funds to help with other crises.
Reply | Post Message | MESSAGES LIST | START A BOARD

kq4ym 12/8/2017 | 9:31:29 AM
Re: space Interesting how space exploration and cosmology are reaching new horizons with super computing. A far cry  from only 50 years ago when we went to the moon with such meager computing power. I do wonder about the expenses for the programs of today and how they are maybe justified in the current scenario of famines and mass exodus of refugees from third world countries though.
Reply | Post Message | MESSAGES LIST | START A BOARD

mhhfive 12/3/2017 | 1:31:26 PM
The Machine? I remember HP touting its nascent "Machine" a couple years back, and I haven't been following its progress closely. Does anyone know what the status of The Machine is now? I thought it had advanced photonics and some completely different hardware from traditional data center computing. Has it gained any more mainstream adoption?
Reply | Post Message | MESSAGES LIST | START A BOARD

Michelle 12/1/2017 | 12:01:04 AM
Re: space The great unknown is vast and worth exploring. This new partnership seems like an excellent project. Let's see how turns out.
Reply | Post Message | MESSAGES LIST | START A BOARD

[email protected] 11/30/2017 | 11:54:53 PM
Re: space There has always been this romanticism about space and what lies beyond but since exploration began we have not yielded much that has impacted u in this galaxy. As we evolve technology maybe the secrets of exploration will be clearer to us all.
Reply | Post Message | MESSAGES LIST | START A BOARD

Seriously, space exploration is exciting. I hope they find what they're looking for.
Reply | Post Message | MESSAGES LIST | START A BOARD