As Amazon searches for a city in which to locate its second headquarters, data analytics provider Looker claims that crunching 2015 numbers from the US Census Bureau makes the answer obvious.

Amazon.com Inc. (Nasdaq: AMZN) said last year it plans to open a second headquarters, equal to its existing base in Seattle, and this month it narrowed the candidate list down to 20 locations, including New York, Chicago, Denver, Austin and a couple of locations in the Washington, D.C. suburbs. (See Amazon Taps 20 Locations as Finalists for Second Headquarters.)

In a blog posted Friday, Looker did some simple calculations and made its prediction for where HQ2 will land. The five primary factors, says Looker, are: population density, or whether a city has enough room to handle a large number of new workers; housing vacancy, for whether new and relocated hires will be able to find places to live; diversity, whether the gender and racial distribution will attract outside talent; and educational achievement, whether Amazon will be able to "leverage the existing educated population fo the location." 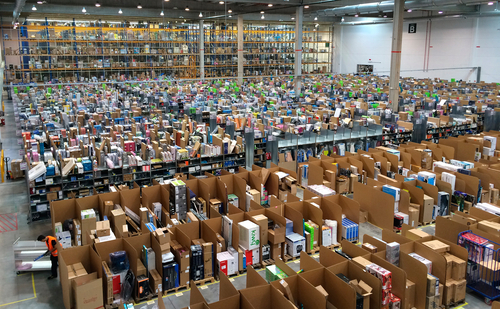 Amazon expects that HQ2 will employ 50,000 people, and Looker assumes that will be a mix of an area's existing population and people relocating for jobs. Looker assigns a five-point rating to each location on each criterion, and the winning location scored 24 out of a possible 25 points, with two runners-up each scoring 22 points.

Denver scores best on population density, with the lowest number of people per square mile -- plenty of room for new people. Not surprisingly, both New York, NY, and Washington, DC, are already pretty well jammed up, Looker says. 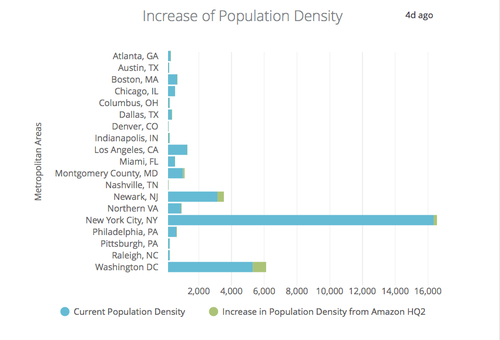 Which location was Looker's top pick? Find out here: "The Data Has Spoken. Amazon's HQ2 Should Be In..."

For another perspective, my friend and former colleague Wayne Rash predicts that Amazon will pick one of the several locations on the list in or near Washington, D.C. He cites several reasons, one being proximity to the US's center of power; another being proximity to the nexus of the US fiber network -- nearly all the world's Internet traffic passes through Northern Virginia.

Susan Fourtané 2/2/2018 | 11:02:39 PM
Re: Diversity and fiber It seems like quite many of the cities on the list need infrastructure, transportation, or healthcare improvements, which make me wonder why they are on the list in the first place. If you could choose three candidate cities for AHQ2, what would they be?
Reply | Post Message | MESSAGES LIST | START A BOARD

Michelle 2/2/2018 | 1:29:27 PM
Re: To the data I assume they already know where they'd like to be. Do you think the public nature of the search will help them get the best deal wherever they go? I kinda hope this helps some of these places get other companies interested in building in new places.
Reply | Post Message | MESSAGES LIST | START A BOARD

Infrastructure is important, but nothing has changed substantially between than and now.

I am hard-pressed to think otherwise that Amazon already has a much, much shorter short-list than is out in the public -- and is simply using this pageant show (that's all it is) to get the best deal it can.

[email protected] 1/31/2018 | 3:20:32 PM
Re: Diversity and fiber Ariella yes and Vegas is struggling with a lot of infrastructure issue like healthcare access which could be a huge issue if you drop 50,000 more people into the pool.
Reply | Post Message | MESSAGES LIST | START A BOARD

[email protected] 1/31/2018 | 3:01:21 PM
Re: Diversity and fiber I have to agree with Joe I couldn't imagine LA being happy about 50,000 people on their freeways because their commuter system has no real comprehensive public transportation. Some of the locations are just not a good fit the cost of living in LA is also very high forcing many into even longer commutes. While NY has the transportation the costs of operating in the city are astronomical.
Reply | Post Message | MESSAGES LIST | START A BOARD

But this often comes back to bite them in the butt when an area not known for a particular natural disaster experiences that natural disaster. Lower Manhattan data centers during Hurricane Sandy comes to mind.
Reply | Post Message | MESSAGES LIST | START A BOARD

Ariella 1/31/2018 | 9:12:47 AM
Re: Diversity and fiber @Joe I know that Vegas was the focus of attention from Zappos founder Tony Hsieh a couple of years back. But he appears to have come to realize that not everything worked out exactly according to plan: https://www.cnbc.com/2016/08/09/zappos-ceo-tony-hsieh-what-i-regret-about-pouring-350-million-into-las-vegas.html
Reply | Post Message | MESSAGES LIST | START A BOARD

Joe Stanganelli 1/31/2018 | 7:52:30 AM
Re: Diversity and fiber @Susan: Frankly, I'm not even sure how or why LA is on Amazon's list at all. Its combination of poor public transportation and absolutely atrocious traffic should automatically disqualify it (to say nothing of the smog and other quality of life issues). If Amazon wants to have an HQ2 in California, it arguably makes much more sense for them to be in the Bay Area/SF.

But San Francisco is out; the Bay Area doesn't need them because they have a bazillion other tech companies, so no incentives are to be had there.

That said, as Amazon clearly wishes to avoid HQ2 being in Silicon Valley, there are still yet better options in California than Los Angeles.

Even Las Vegas -- about a 9-hour or so drive away in neighboring Nevada -- has earned a reputation as a nascent tech hub. Las Vegas also enjoys a relatively low cost of living and relatively low population density for a city of its size. The public transit still leaves a lot to be desired, but it doesn't have nearly the traffic problems. But Las Vegas didn't make Amazon's HQ2 list either (probably because Las Vegas isn't willing to shell out the incentives; it doesn't have to, because it's got all that casino money).

I suspect LA is primarily on the list because attracting Amazon would be such a huge win for the city that they're likely willing to offer major incentives to Amazon -- which, I further suspect, Amazon will use as a negotiating tool in bargaining with much more appropriate municipalities.
Reply | Post Message | MESSAGES LIST | START A BOARD
Page 1 / 2   >   >>
EDUCATIONAL RESOURCES
sponsor supplied content
IDC Whitepaper: Key Considerations When Operationalizing Artificial Intelligence Strategy
Design Guide: best-in-class hybrid IT infrastructure with AWS Outposts
Blueprint: optimize data exchange with AWS Outposts
Ericssons Cloud RAN e-book: A comprehensive guide to adopting, deploying, and scaling virtualized 5G in your networks
The Four Key Components of Cloud RAN
How to get the most out of 5G mid-band in Cloud RAN
QCT Introduces New Innovative Family of Edge Servers for the Telco Marketplace.
TOOL - Interactive Experience: Learn how to Evolve your Architecture and Monetize Next Generation Metro and Edge Networks
Whitepaper  Achieving IP/Optical Convergence: Building from Existing Networks
Executive Guide  Enabling Next-Generation Metro and Edge Networks for Communications Service Providers
Educational Resources Archive
More Blogs from Wagners Ring
Podcast: Don't Call Us an SD-WAN Provider  Cato Networks