Red Hat Speeds Toward $3B in Revenue Thanks to Cloud

These are heady times for Red Hat.

On Tuesday, the open source company announced its third-quarter financial results for the period that ended November 30. The numbers are impressive: $748 million in quarterly revenue, a 22% year-over-year increase, along with a GAAP operating income of $118 million, a 47% increase.

However, the most important number is contained in Red Hat's full-year outlook. Specifically, the company is expecting revenue of approximately $2.9 billion when it closes the books on its fiscal 2018 year. 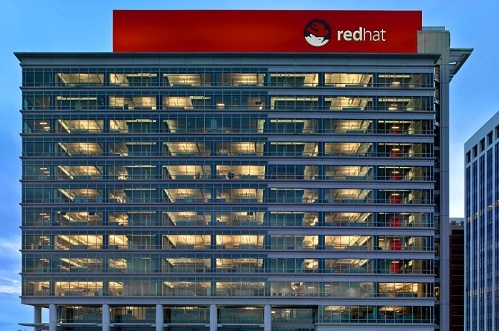 In a call with analysts on December 19, CEO Jim Whitehurst expressed it this way:

As we closed out our fiscal year, we are pleased that our fourth quarter revenue outlook will exceed a $3 billion annual run-rate. In addition, we are confident about our growth prospects based on the substantial markets we are addressing combined with Red Hat's broad product portfolio and strong market position. The execution we are driving today will create additional growth opportunities for our customers and partners in the future.

As Steven J. Vaughan-Nichols writes on ZDNet, Red Hat has become the de facto supplier of enterprise-grade Linux to businesses. However, the company is showing increasing growth around its slate of cloud products.

In his call with analysts, Whitehurst emphasized three key points of the company's cloud strategy. The first is the expanded use of some of Red Hat's primary cloud technologies, including OpenShift, the company's container platform, and Ansible, which is tied to DevOps and cloud-native application development. (See Microsoft, Red Hat Expand Partnership to Include Containers.)

Red Hat has also embraced Kubernetes, the Google-based container orchestration platform, which is now considered the leading management offering for containers. (See What If Kubernetes Is One Big Google Conspiracy?)

The second point is Red Hat's partnership with public cloud providers, including Alibaba Cloud, which is now part of its Certified Cloud Service Provider program and offers Red Hat Enterprise Linux as a service to customers.

Taken together, these developments, as well as others, have Red Hat eyeing greater financial gains next year.

"We have several significant drivers of the business, obviously, [the] move to cloud has allowed RHEL growth to continue at a solid double-digit pace and I think as we look forward, again, not providing guidance at this point, but we see a solid pipeline and ability for RHEL to continue to grow that quickly," Whitehurst said.

kq4ym 12/26/2017 | 8:50:41 AM
Re: RHT If we only had a crystal ball, wouldn't all our stock picks be great. But nonetheless, Red Hat seems to be on a streak here with "operating income of $118 million, a 47% increase," nothing to sneeze at. I wonder how much the collaborations with Alibaba Cloud is helping the numbers, which one might guess will be increasing over time with that giant company moving the cloud business ahead.
Reply | Post Message | MESSAGES LIST | START A BOARD

danielcawrey 12/20/2017 | 6:55:10 PM
Re: RHT Good to see a company like Red Hat embracing enterprise open source. I know that's always been their motto, but great to see them advocating for this type of technology. And since they make money doing it, I think that's postivie for the community.
Reply | Post Message | MESSAGES LIST | START A BOARD

That's a most respectable increase. It would have been a good investment -- unlike the stocks I select that tend to plummet within months of purchase.
Reply | Post Message | MESSAGES LIST | START A BOARD
EDUCATIONAL RESOURCES