CoreOS launched in 2013 with a mission of providing organizations of all sizes with webscale infrastructure for updating and patching servers and reducing downtime and security vulnerabilities.

CoreOS provides Tectonic, which automates Kubernetes management and operations, and will enhance those capabilities for OpenShift, Fernandes says. 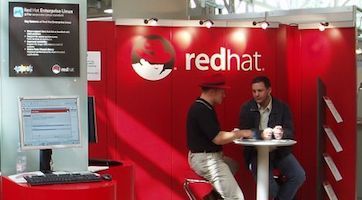 Red Hat, 2004. Photo by Igelball at German Wikipedia GFDL or CC-BY-SA-3.0, via Wikimedia Commons
Keep up with the latest enterprise cloud news and insights. Sign up for the weekly Enterprise Cloud News newsletter.

But the acquisition isn't really about containers; containers are just the enabling technology, Fernandes says. "This is really about enabling hybrid and multicloud solutions," he says. Enterprises now manage traditional and cloud-native apps running on-premises and in public, private and hybrid clouds. "That's what we're trying to enable with OpenShift, our container platform, and that's what this acquisition will help us accelerate."

CoreOS has 130 employees, with a primary office in San Francisco and offices in Berlin and New York, NY, all of which will be coming to Red Hat.

kq4ym 2/7/2018 | 8:28:40 AM
Re: Congrats On it's way to acheive a $3 billion revenue stream it's going to certainly find some disruption in the workforce and who's staying and leaving. Redhat has certainly been on an acquisition jag the last few years and it will be interesting to see how managers handle the mix and determine who stays or not.
Reply | Post Message | MESSAGES LIST | START A BOARD

Michelle 1/31/2018 | 8:51:04 PM
Re: Congrats Indeed. Mergers can be tough for employees when companies begin to cut costs. We shall see how it goes with this one!
Reply | Post Message | MESSAGES LIST | START A BOARD

[email protected] 1/31/2018 | 3:05:00 PM
Re: Congrats Michelle its true integration of staff and products is always harder than it seems. Many acquisitions become painful very quickly for both parties.
Reply | Post Message | MESSAGES LIST | START A BOARD

Michelle 1/30/2018 | 9:59:40 PM
Re: Congrats It's always interesting to see what happens next. A great many of acquisitions end popular products. I hope this one works out.
Reply | Post Message | MESSAGES LIST | START A BOARD

[email protected] 1/30/2018 | 9:47:30 PM
Re: Congrats I agree and its shaping up to be the year of acquisitions which is good to see, companies investing in extending their capabilities through acquisition rather than sitting on piles of cash.
Reply | Post Message | MESSAGES LIST | START A BOARD