Infinera Restructures as It Absorbs Coriant

Infinera said it will take a charge against earnings in the range of $6 million to $8 million related to a restructuring that's going on right now.

The company said in a filing with the Securities and Exchange Commission (SEC) that this charge covers "severance and employee-related costs."

When asked to comment by Light Reading, Infinera declined to reveal how many people it is cutting as part of the restructuring. When the company closed its acquisition of Coriant, the company said it was adding approximately 2,100 employees, over 1,600 patents and more than 600 customers globally. (See The New Infinera Is Already on Edge and Infinera, Coriant Hear a $430M Siren Song of Synergy .) 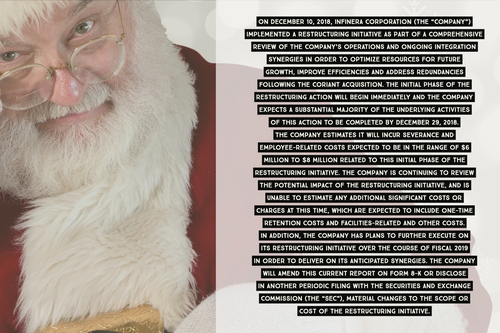 By itself, Infinera employed 2,145 people as of December 30, 2017; about 1,003 of those employees were outside the US. Given that background, one could start counting back from 4,245 to find out the possible severity of the company's latest rounds of cuts.

Several challenges are ahead for Infinera as it slims down its operations. The company has to retain a key customer with CenturyLink Inc. (NYSE: CTL) and Level 3, where it has a significant amount of long-haul WDM business to protect. It also needs to successfully integrate its ICE offerings into Coriant's products to get to the kind of price and performance metrics that will help it reach the $250 million in merger synergies it said it would hit by 2021. (See Infinera Shifts Up a Gear With Its Latest Optical Engine and Infinera's Integration Situation Needs More Explanation.)