5G's Future Could Literally Be Full of Hot Air... And Drones

Well, a small but growing number of startups hope to eventually make the deployment of 5G much more interesting by replacing boring old cell towers with all kinds of airborne objects, ranging from tethered balloons to blimps. Indeed, if such companies have their way, 5G in the future might well live mostly in the clouds rather than down here with the rest of us on the ground.

So far, here in the US, there are two main startups working to push the idea of airborne 5G basestations, arguing such technologies are cheaper, easier and quicker to deploy in rural areas -- and cover much more territory -- than traditional cell towers.

Elefante Group
Based in Denver, Colo., Elefante Group was founded in 2015 and boasts of Lockheed Martin as its prime contractor. It's urging the FCC to issue spectrum rules that would allow it to fly stratospheric airborne platforms (STRAPS in Elefante parlance) to provide Stratospheric-Based Communications Services (SBCS). Basically, the company wants to launch giant blimps (700 feet long!) and 12 miles up into the sky to beam Internet services across huge swaths of territory. 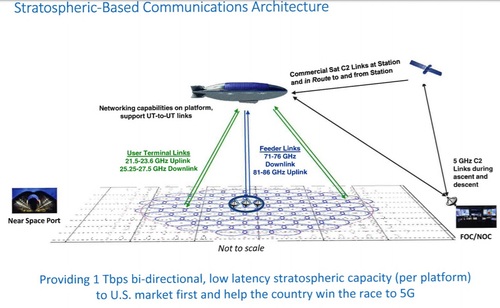 In its FCC filing, Elefante Group offered a look at how its platform would work.

"Elefante Group's SBCS, operating as a network in the sky with end-to-end latencies of <5 ms, will deliver advantages that complement both land-based networks and satellite systems and that would help the United States 'win the race to 5G' in urban and rural areas, as well as advance a number of other Commission and [Trump] Administration public interest objectives," the company wrote in a recent filing to the FCC.

Elefante CEO Brian Terkelsen said the company's business model could include renting space on its blimps to wireless network operators and other companies looking to provide connectivity. The company hopes to get its blimps into the sky by 2022.

Altaeros
Much like Elefante, Altaeros wants to rent space on its balloons to wireless network operators and others. "What we're doing is building what is a very tall cell tower," said CEO Ben Glass, who explained that the company's technology sends tethered balloons 800 feet into the air with standard basestation equipment, creating a platform that can cover up to roughly 4,000 square miles with cell coverage.

The key thing here, though, is that Altaeros's balloons don't require a ground crew, so they're 60% cheaper than building a cell tower in a rural area. Spinning out of MIT in 2010, and focusing on the wireless industry since 2015, Altaeros now counts 35 employees. Glass said the company has been conducting tests of its technology "with many of the big customers, many of the big household names," which he declined to identify, and hopes for a commercial deployment next year.

Facebook, Google and SoftBank
The notion of Internet from the sky is not new. Satellites have been providing slow, expensive internet services for years, and a new crop of low-Earth orbit (LEO) satellite hopefuls -- ranging from OneWeb to SpaceX's Startlink to Amazon -- hope to improve the market for satellite-based communications by launching thousands of smaller satellites in lower orbits, providing faster speeds and potentially cheaper connections.

Companies like Facebook and Google have also dabbled in decidedly more experimental approaches, though both have since pulled back from such efforts. Facebook has mostly shuttered its Aquila project that would have used a gigantic, solar-powered planes to beam Internet connections to rural areas, while Google's Loon balloon project was spun out of the company's R&D division last year and has since been pursuing the space with a much more pragmatic approach.

But that doesn't mean all the big names have withdrawn from the 5G skies. For example, Japan's SoftBank recently took the veil off its HAPSMobile business, which the company said will use autonomous drones to beam Internet services into unconnected areas all over the world. The company said it will begin testing the service in Hawaii and elsewhere, with the goal of mass producing the drones for commercial service by 2023.

Bentnielsen11 7/3/2019 | 3:39:33 AM
Interesting but.... Interesting article for someone interested in drones. However, I doubt that the business model of including renting space could get the company into the sky by 2020. Am I the only one who is in doubt of that?