Equinix today announced a major expansion of its Equinix Cloud Exchange and in the process, dove much deeper into the enterprise market. The data center/interconnection specialist will now allow enterprise customers to use its portal to rapidly order interconnection within an Equinix data center or between data centers on the same continent, and pay for those connections on a usage basis.

What Equinix Inc. (Nasdaq: EQIX) is calling Platform Equinix enables local-area or wide-area interconnections within five minutes, and is available immediately in nine US data centers and 11 European facilities. In early 2018, Equinix will add two facilities in the US and one in Europe, and the roadmap includes six facilities in Asia-Pacific, says James Staten, chief strategist for the cloud and enterprise group.

Also planned on a more long-term basis is connectivity across continents. 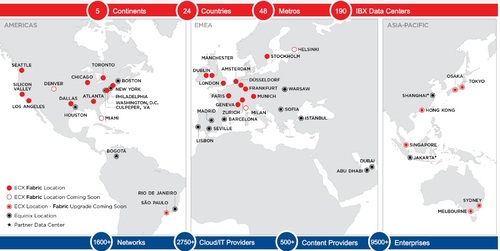 First is the more rapid service turn-up via the portal and API, with service now delivered in five minutes or virtually on demand. "So customers will be able to build new digital programs that automatically set up their own connections on the fly," he comments.

Secondly, virtual connections will be set up on a pay-per-use basis, "so if you are building out a new service or new capability and you are not sure how much bandwidth it is going to need, or how successful it is going to be, you don't have to worry about signing up for a one-year contract," Staten says. "You need it for 15 minutes? Use it for 15 minutes, and you only pay for what you actually used."

And third, customers can use the ECX fabric, which offers direct connections to many popular public clouds including AWS and Microsoft Azure, and its portal to set up either LAN connections inside data centers or WAN connections between data centers, depending on where their network partners/cloud providers/business partners are located, through a single process, he adds. "That applies to any type of connection whether it is within the same data center across North America or across the ones in Europe."

All of this is being done in service of the enterprise cloud market and the need for simple and more automated ways to support hybrid clouds connections and make them efficient and affordable. Enterprises don't want to use public Internet connections into the cloud because they are slow, best-effort and not secure, Staten claims. What Equinix is offering them is an easy, one-stop way of connecting to a variety of ecosystem partners, including cloud service providers, telecom networks and even their business partners, suppliers and customers. In the process, of course, Equinix takes ownership of those enterprise customers.

Existing ECX customers can make use of the new capabilities, and new customers can get started by establishing their own colocation presence within Equinix or partnering with a service provider who already has such a presence. Staten says the easiest first step is a performance hub, which is a small colo cabinet with a single connection into the data center. From there, an enterprise has access to the full range of ECX features, he says.

The Equinix exec says service providers -- whose services Equinix is reselling between its data centers -- are among the earliest adopters of the new capabilities.

"They have been very interested because it allows them to have a greater story and much greater geographic reach than they have on their networks alone," he comments. "They are using it to provide a greater ecosystem of connections. They can say to their customers, 'Here are all the companies that are in the Equinix ecosystem that are available as part of an extension of the networks we can provide to you, because we are in the Equinix ecosystem as well.' "

To accomplish all this, Equinix invested heavily in its own infrastructure. Staten says the company enabled SDN instant connections through the portal and revised its API architecture so that services could be turned on. Where it was needed, Equinix also bulked up its network connectivity from service providers to make sure the SDN services could be delivered between data centers.

Telecom service providers will also reap the rewards of the Equinix Platform success by selling more bandwidth to a greater range of customers between the data centers, he notes. The question will be, of course, whether just selling bandwidth to enterprise cloud users through Equinix will be enough for telecom service providers, to whom this could look like competition.

Enterprises like it, Staten says, because it simplifies things for them.

"Our customers said they just want to connect, they don't want to have to worry about how it is done and who does it, what's involved," he commented. Being able to eliminate separate purchases is a convenience for them.

Equinix has plans to continue investing heavily in more connections between cities, and expanded data center footprint, as well as in more data centers in new metros -- some of which Staten admits will begin to look more like edge data centers than the massive facilities for which Equinix is known today. And the company plans to add certifications, recognizing there will be rules and compliance requirements when data starts traversing borders.

The first three cities to be added will be Denver and Miami in the US and Milan in Italy. Coming soon will be Melbourne and Sydney in Australia; Osaka and Tokyo in Japan, plus Singapore and Hong Kong.

Equinix also is offering enterprises something it calls IOA Knowledge Base, which helps understand how to implement what it calls an Interconnection Oriented Architecture (IOA).