Equinix is determined to become a strategic partner to enterprises as they move more into the cloud. That drive is showing early signs of success, and the company once mostly known as a data center provider is using its interconnection capabilities in new ways.

The company has been on a steady growth path, increasing quarterly revenues for the past 61 consecutive quarters, but that growth in revenues is increasingly coming from cloud and IT services (30%) and enterprises (15%). The volume of interconnections for cloud and IT grew 178% last year, making it by far the fastest-growing category, the company reported on a recent analyst day.

Equinix Inc. (Nasdaq: EQIX) is just getting started, says Tony Bishop, Equinix's vice president of global vertical strategy and marketing. After expanding its Equinix Cloud Exchange and adding a SmartKey security service, the infrastructure player is touting its role at the center of the hybrid cloud connectivity picture.

A prime example of how enterprises are using the expanded capabilities is Sentara Healthcare, which is using Equinix's multicloud connections to enable a customer portal that is accessible via Amazon's Echo smart speaker. Speaking on a customer panel at the Equinix analyst day earlier this summer, Matt Douglas, chief enterprise architect for Sentara Healthcare and formerly with Smithfield Foods, said he sees Equinix as the critical middle piece in his cloud strategy.

"Sentara wants to develop a portal to make it more user-friendly, more patient-friendly," he commented. "We are actually doing multi-layer API compute nodes, doing Kubernetes micro-compute nodes inside of [Microsoft] Azure and then pulling Alexa skill sets from AWS. We use Equinix as the center of that."

Bringing more clouds inside
"One of the cool things is that, within the last year, Equinix also started turning up services, so I can access [Microsoft] 365, I can access SAP, I can access Salesforce," said Douglas, who first used Equinix as the global hub for a Smithfield Foods digital retransformation. He is even convincing other vendors -- those who will support his legacy IBM AIX Unix gear, for example -- to come to Equinix as well to enable peer-to-peer connections.

Bishop says that's the kind of deployment Equinix is targeting because it takes advantage of the range of capabilities the company can offer from its global platform: In addition to its legacy data center and colocation facilities, it has massive interconnection on site and direct on-ramps to a wide range of public and private clouds.

"What we're doing is we're creating one logical and physical platform connected together, that through SDN capabilities, you can now connect your own infrastructure, or you can connect to third-party infrastructure or you can use it to have others come connect to you," he says in an interview. "It's all part of the same global platform."

What advanced customers such as Sentara are doing is taking advantage of the concentration of users and traffic to consume other services and interact with multiple other users, applications and services, Bishop adds. That's one key reason for adding SmartKey security services to the mix.

"We are starting to see a lot more customers on the enterprise side start to build out this multi-node, distributed footprint where they're not only inter-networking or interconnecting and localizing traffic in every major metro where they do business and have concentration of users, but they're also really starting to build out a security fabric there," he says. "And that makes sense because if that's my ingress point from the external world into my world, I need to bring security there. And then, I need to be able to deal with staging data that either comes from the last mile or is data that I need to participate with other services such as cloud services. We let them do all of that."

Robert Hinze, senior director of institutional retirement technology at TIAA, said during the Equinix analyst day panel that secure access is a major driver for his company's use of Equinix.

"For us, it's about secure access -- we get securely into the facility and get out of real estate business, but it's really about secure access," he says. "Everything we [need] is down the hall, across the aisle or in a different room. We get access to all of the other services that we are either placing there or that are already resident. It's not about the data center anymore; it's about the entire stack that has to provide the complexity and security at that environment."

That's the intent, Bishop says. Equinix is courting enterprises by offering a platform and ecosystem that includes their networking and colocation needs but also cloud on-ramps and other services.

"If I were to net it for you, I would say to think of us as a platform where you can physically deploy and connect things, and then you can manage it logically," Bishop comments. "And you should be able to consistently do that in all the major metros around the world where you do business, and you need to either participate, either to provide capabilities, or consume capabilities, or reach other market participants." 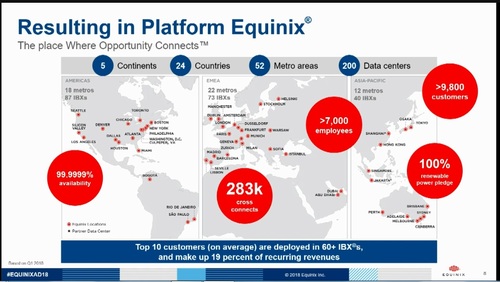 Of course, the other major piece of the story is the way Equinix has expanded its reach, through acquisition and organic expansion. The company closed its 21st and 22nd acquisitions earlier this year and has 30 organic expansion projects underway including new expansions in the Amsterdam, Tokyo and Zurich metros. Equinix now has 200 International Business Exchange data centers in 52 metro areas in 24 countries on five continents. The Equinix Cloud Exchange is available across North America and EMEA and is now rolling out in APAC, with plans for completion by year's end.

Getting the word out
If the company faces a major challenge, it is getting the word out to enterprises and being seen within the industry as an enterprise play, not just as a data center or network interconnection point. Douglas told Equinix CMO Sara Baack that he finds few people have heard of Equinix, but they are familiar with companies that resell Equinix's services, including systems integrators and telecom network operators.

Peter Van Camp, president and executive chairman, who became interim CEO when Steve Smith abruptly resigned this year, told the analysts that Equinix is investing heavily to bring this new story to market, with a sales team of 1000-plus, including 440 people in field and corporate sales.

Equinix is also becoming a bigger part of the new "edge" as enterprises begin to see the company as the first logical step to the cloud, Bishop says.

Kirk Joubert, director of network services for food giant Sysco, told the analyst day crowd that his company started with a small proof of concept three years ago and now has about 8,000 servers in the cloud.

"We have a major strategy of being cloud first, so the challenge is how do we get to cloud providers and do it efficiently and quickly, spinning up things that the cloud brings and working more agily," he said. "We have positioned Equinix right at the edge of our cloud. We have now interconnected our six data centers into Equinix, I run multiple networks, including a backbone network to get data into the cloud."

The ecosystem includes a network that connects the data centers in an east-west fashion and then Sysco's own internal community that leverage the data centers from north-south perspective to access applications, Joubert said "Equinix is the glue in the middle that allows this ecosystem to properly function. We put tools and other things at the edge of cloud to apply security and load-balancing. That way we can do it at the edge, not all the way in the cloud."

The result is lower latency and also more efficient use of resources in bigger clouds like Azure and AWS, since traffic into those locations is consolidated into very large pipes, he added.

Becoming a more strategic partner to enterprises does not put Equinix in competition with its major network operator customers, Bishop insists, although some of them might disagree. Network service providers are the second-largest consumer of Equinix' cloud fabric and are using its newer capabilities to offer new connections to their customers as well, he notes.

He also says it's unlikely Equinix will become part of a true "edge" computing play, though he doesn't rule out continued expansion in that direction if enterprise customers want it. With only about 20% of enterprises having realized their cloud transformation strategy, Bishop notes, Equinix sees a lot of upside to just continuing the current strategy.