US Ban on Huawei Would Trigger Turmoil in Telecom Industry

US authorities investigating whether Huawei violated sanctions against Iran could deliver an unprecedented blow to the global telecom industry by imposing restrictions on the Chinese company. (See US Investigating Huawei for Sanctions Violations  Report.)

The number-one fear is that Huawei Technologies Co. Ltd. will suffer the same penalty as smaller rival ZTE Corp. (Shenzhen: 000063; Hong Kong: 0763). Last week, after it was accused of failing to put its business in order, ZTE was banned from purchasing US-made components for seven years. Its original crime? Violating sanctions against Iran. (See ZTE in Existential Crisis as It Slams 'Unfair' US Ban, Considers 'Judicial Measures'.)

The knock-on effect of that decision has already been dramatic. A report from the Economist indicates that between 80% and 90% of ZTE's products used American components in 2016, according to UBS. With its supply chain in jeopardy, ZTE says its very survival is at stake. Shares in component suppliers such as Acacia, which derives 30% of its revenues from ZTE, have plummeted.

ZTE's customers are also nervously tracking developments. "We use ZTE in Malaysia, Pakistan and Hungary and we are following the situation closely," said Sigve Brekke, the CEO of Norway's Telenor Group (Nasdaq: TELN), when asked about ZTE during a recent earnings call with analysts. "This is something we have been following for the last one and a half years since the first order came out. I cannot comment more than that." (See Telenor's Cost-Cutting Focus Rattles Investors.)

ZTE's main rivals, meanwhile, may be hovering greedily, like carrion crows over a wounded animal. "We come from a strong security background and are trusted from a quality point of view. We have a good chance to succeed in this environment," Nokia Corp. (NYSE: NOK) CFO Kristian Pullola told Light Reading when asked if there was opportunity in ZTE's misfortune. "We will monitor the situation and try to use any opportunity that would present itself in radio, routing or optical." (See Nokia Tumbles on Weak Results, Insists Good 5G Times Lie Ahead.)

While Ericsson CEO Börje Ekholm struck a warier tone during a recent earnings call with analysts, operators are evidently jumpy. "Many customers are asking questions and that is not so strange, but let's refrain from summarizing that yet," he said. (See Ericsson Takes Giant Leap Toward Profitability.)

But if measures against ZTE have caused this much turmoil already, a ban on Huawei could prove even more disruptive. With total revenues of $17.2 billion last year, ZTE remains some distance behind the triumvirate of Huawei, Ericsson and Nokia Corp. (NYSE: NOK), and a marginal presence in some countries. Huawei is today the largest of those industry giants, generating $92.5 billion in sales last year. About $47 billion came from network sales to operators. 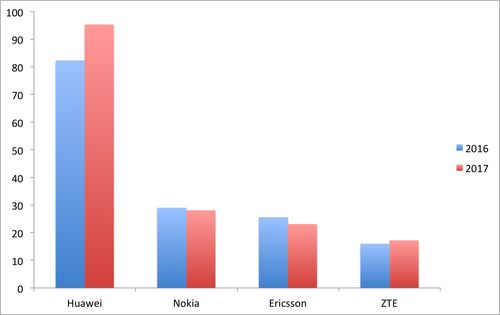 For some of the US component makers, a ban on selling gear to Huawei could be devastating. NeoPhotonics Corp. (NYSE: NPTN) looks the most exposed, generating as much as 40% of its revenues from sales to Huawei, according to Michael Genovese, an analyst with MKM Partners. But Oclaro Inc. (Nasdaq: OCLR), Finisar Corp. (Nasdaq: FNSR) and Lumentum Holdings Inc. are also heavily dependent on contracts with Huawei, deriving between a tenth and a fifth of their revenues from the Chinese company.

Genovese, who monitors optical stocks for MKM, also thinks a ban could translate into an even bigger opportunity for the likes of Nokia than restrictions on ZTE alone. "If Huawei were to eventually be cut off from buying US components, which is not our base case assumption, then the market share gain opportunities for Nokia, Ciena and Infinera would become even greater, in our view," he said in a research note this week.

The optical upside for rivals to Huawei and ZTE could be considerable. According to MKM Partners, Huawei is currently the number-one optical systems player in the world, while ZTE occupies the number-three spot. "We think Nokia has a great opportunity to gain share from ZTE in China and outside of China," said Genovese. "Ciena and Infinera will also likely gain some share from ZTE outside of China."

in addition, the annual report also disclosed that currently there are approximately 180,000 Huawei employees and over 160 nationalities. The localization rate of overseas employees is approximately 70%. In terms of 180,000 employees, the annual salary per employee of Huawei was 688,900 yuan in 2017 based on the amount of employee salary, salary, and other benefits, and the amount of time under the project plan.

Huawei actually triggered a controversey in Japan, when it offered its brand new college graduate Japanese employees 2.5 times what Japanese big companies were paying as the starting salary.
Reply | Post Message | MESSAGES LIST | START A BOARD

Is this true? Where did you get this info? 115K USD is not cheap at all, it could be

a bit less in Silicon Valley, but definitely a good number for the rest of USA. Given the army of employees Huawei has, how can they afford to be profitable, employee owned with NO meddling from the Chinese Government as per Huawei? Even the other competitors like Nokia and ERIC may not have 115K as average salary.

Such high wage allows Huawei to attract the best and the brightest across China.

Huawei gets its price competitiveness from attractive financing from Chinese state banks and state subsidies, not from low wage.
Reply | Post Message | MESSAGES LIST | START A BOARD

They steal american jobs and designs, Cisco was one. They have dam cheap labor and have run many equipment manufactures in the US and in the Euro out of business. For a long time they have had secret back door access to their equipment to monitor every thing. So the dam cheap labor is the killer used to out bid everyone. It a company that needs to be throttled back.

I think for now the US will  use the Huawei Iran probe as just a means of pressing its case of China as mercantilist scofflaw.  The nuclear option of banning component supply is highly unlikely - and there are even some in CHina who think ZTE deserved the ban for its stupidity.

But interesting that Tim Cook met with Trump this week. Apple is the one most vulnerable to China retaliation.

That said, the situation for Huawei has gone from bad to worse, politically. Case in point: HPE's recent emphatic distancing of itself from a standard collaborative announcement in which Huawei mentioned HPE by name. (link)
Reply | Post Message | MESSAGES LIST | START A BOARD

rocket101 4/27/2018 | 3:22:18 PM
Re: Trigger turmoil and...[Huawei will NOT be missed] What turmoil? Huwaei will NOT be missed as it was anyway irrelevant here in USA and hope Europeans too wake up. Why is Lightreading so worried with what is going on with Huawei? Looks like Lightreading is being paid to write rosy articles about Huwaei? Is thjis true?

Request to Lightreading...please stop being a mouthpiece for Chinese vendors...if you have to publish rosy articles regarding Chinese vendors, please also publsih the negative ones.

There will be no turmoil at all. There are plenty on vendors out there, no need to worry.

tojofay 4/27/2018 | 2:08:36 PM
Re: Trigger turmoil and... Cut and paste is lazy, only slightly better than a company paying you to write, promote, and say favorable things about it in the guise of objective analysis. May the best product win in an open market!

In all seriousness, this situation deserves a reasoned debate - I hope the next message posted will kickstart such a conversation because this is increasingly looking like a pivotal moment for the industry. Major instability in the supply chain caused by any further curtailments in the trading options for US components firms would favor only the few.
Reply | Post Message | MESSAGES LIST | START A BOARD