Nerves must be shredded at Lumentum's Milpitas, Calif.-based headquarters.

The optical components company has had a week or so that would test the mettle of any outfit, but the signs are not all bad.

First, it came into December with a fiscal second quarter profit warning hanging over its head after Apple Inc. (Nasdaq: AAPL) significantly reduced an order for 3D-sensing laser diodes, a component it uses in its smartphones. That forced Lumentum Holdings Inc. to reduce its guidance for the final three months of calendar 2018, with revenues expected in the range of $335 to $355 million, down from the previously expected $405 to $430 million, while the expected operating margin was reduced to 23% to 25%, down from 28% to 30% previously.

That bombshell wiped more than 30% off Lumentum's share price in early November, as the chart below shows.

Then the Huawei Technologies Co. Ltd CFO was arrested early last week and the idea that US firms might be banned from supplying products to the Chinee vendor became a real possibility. With Lumentum being a significant supplier to Huawei -- the Chinese vendor accounts for more than 11% of its annual revenues -- that put further doubts on future revenues and profits. As a result, the company's share price, having recovered either side of Thanksgiving, took another slide in early December. (See Huawei CFO Committed Sanctions Fraud, US Alleges  Reports , China Slams Huawei CFO's Arrest, Huawei 'Not Aware of Any Wrongdoing', Ciena Positioned to Profit From Huawei Backlash  Analyst and How the West Can Hurt Huawei.)

But Huawei is just one customer and Apple hasn't gone away (it appears to be taking a breather with multiple suppliers as it figures out its production plans): Time was needed to figure out exactly what Lumentum's future looked like.

But that wasn't the only bouncing ball in Lumentum's park. In February, it announced a $1.8 billion takeover deal for Oclaro, a much fancied optical components specialist that had been linked to multiple suitors -- and that deal just closed this Monday. (See Lumentum Completes Oclaro Acquisition and Lumentum Sweeps Up Oclaro in $1.8B Deal.)

That acquisition gives Lumentum a broader and stronger portfolio, just a time when it needs it. It must be noted, though, that Oclaro is also a supplier to Huawei and to its fellow Chinese network systems vendor ZTE, which is still in hot water with the US authorities despite having escaped a components supply ban earlier this year.

So there was a heady mix of news and developments. With Wall Street cranking its models and analysts furiously rubbing their crystal balls, all of a sudden things didn't look quite as bleak for Lumentum as they did a week ago. That's why the vendor's share price is creeping back up (it is currently up 2.6% Tuesday to $44.52).

Things could be better, of course. If US components firms are at any time banned from supplying Huawei, that is going to be bad news for Lumentum. Not only would it lose a valuable customer, but such a move would also likely be the catalyst for new rivals to be funded and seeded in China.

So now analysts are looking at what the market might look like for Lumentum now that it has Oclaro on board but with the possibility that Huawei's custom work might soon go away.

For example, Mike Genovese at MKM Partners , in a research note issued early Tuesday, believes Lumentum's stock has been hit too hard. Despite all the negative news, he still rates it a buy, even if Huawei's business disappears. If there is no Huawei ban, he believes the new, bigger Lumentum+Oclaro could generate earnings of as much as $5.40 in calendar 2019, as he expects Apple's business to return after a blip: If sales to Huawei were not allowed, that would drop to about $4.16. But even under that scenario, he would still put the company's stock price target at about $50 per share, higher than where it is trading right now.

But as Genovese states, "as analysts, we are in uncharted territory with the arrest of the Huawei CFO." The analysts are not alone -- the industry is holding its breath, for one reason or another. 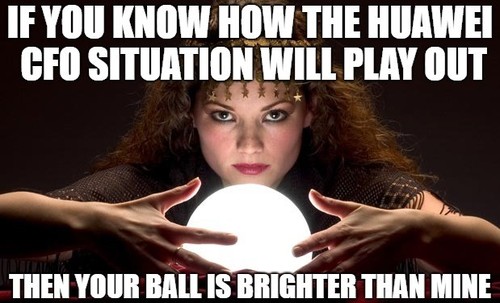