With the ban on sales to ZTE now lifted, optical components specialist Acacia is predicting a welcome boost to its revenue numbers in the coming months and that, in turn, has given its share price a lift.

As previously reported, Acacia Communications Inc. was hit hard by the denial order issued in April that barred US firms from selling components to ZTE Corp. (Shenzhen: 000063; Hong Kong: 0763): The Maynard, Mass.-based optical modules vendor generated about 30% of its sales from business with the Chinese networking equipment giant. (See Acacia Hit Worst by ZTE Components Ban.)

But with concessions made by ZTE, and political pressure overcome, the ban was lifted last month, though not before the Chinese vendor suffered significant losses. (See ZTE Stock Rises After US Lifts Ban, Senate Republicans Capitulate to Trump's ZTE Deal and ZTE Racks Up $790M Q1 Loss on US Ban.)

That's good news for Acacia. Reporting its second quarter numbers late last week, the company noted that its revenues for the quarter ending Sept. 30 should be around the $90 million mark, are would include "approximately $14 million of forecasted revenue attributable to our slow restart of shipments to ZTE Kangxun Telecom Co. Ltd. and certain of its affiliates ('ZTE')."

It added: "The forecasted revenue for ZTE is based on Acacia Communications' ongoing discussions with ZTE following the July 13, 2018 termination of the U.S. Commerce Department's ban with respect to sales to ZTE. We are providing this guidance with respect to ZTE-related revenue on a one-time basis because of the ongoing extraordinary circumstances surrounding our restarting shipments to ZTE."

The news lit a fire under Acacia's stock, which jumped almost 13% Friday to end the week at $37.93. Acacia's shares were trading at $38.05 as this article was published, not far off the $40.03 at which it was trading before the ban was imposed in April (see the chart below). 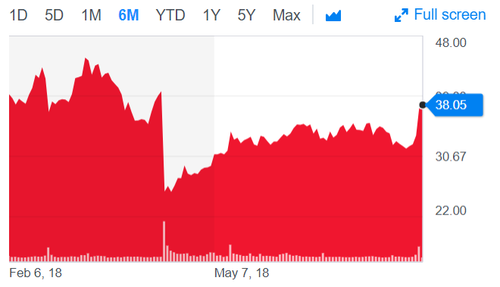 Of course, those revenues are yet to materialize, though CFO John Gavin noted in the earnings release that the company is "cautiously optimistic that our re-engagement with ZTE will become more ordinary course over the next few quarters."

In addition, CEO Raj Shanmugaraj noted on the company's earnings call that ZTE expects to "ramp capacity over the next few quarters," though it is hard currently to predict exactly what impact that will have on shipments.

The company is also bullish about increasing sales from other customers and from increasing orders for new products such as its CFP2-DCO (Digital Coherent Optics) modules.

But in addition to the ZTE situation, Acacia now also faces some uncertainty as a result of the planned acquisition of Coriant by Infinera. Acacia is playing cute on this topic, with CEO Shanmugaraj noting on the earnings call: "We have longstanding business relationships with both of these companies. We are well penetrated in many Coriant platforms and do not believe that this announcement will have an adverse impact on our business in the short or medium term, although it is too early to predict any longer-term impact. We look forward to continuing our engagement with these companies on existing projects and potential new opportunities in the future." (See Infinera, Coriant Hear a $430M Siren Song of Synergy and Infinera's Integration Situation Needs More Explanation.)

In the meantime, Acacia's second quarter revenues were down 18% year-on-year to $65 million due to the ZTE ban (which lasted for most of the quarter) and it reported a $12.1 million operating loss.