Broadcom is relocating stateside, and in doing so, the company has very likely completed the last commitment necessary to gain approval for its proposed $5.9 billion acquisition of Brocade.

In a news release, Broadcom Corp. (Nasdaq: BRCM) said it is moving the location of the company from Singapore to the US because of federal tax cut plans now being weighed in Congress. While emphasizing that Broadcom will relocate whether or not a new corporate tax cut is passed, President and CEO Hock Tan called the proposed tax code changes "pro-growth" and said they would "effectively level the playing field for large multinational corporations headquartered in the US."

What Tan didn't mention is that, as the Associated Press points out, a relocation also means that Broadcom can bypass scrutiny by the Committee on Foreign Investment in the United States (CFIUS), which is even now reviewing the company's bid to buy out Brocade Communications Systems Inc. (Nasdaq: BRCD). The deal has stalled in recent months, even after Brocade agreed to sell off government contracts to Hitachi Data Systems (HDS) as a way to assuage security concerns. Originally, Broadcom and Brocade had agreed that either company had the right to terminate their merger agreement if the deal wasn't closed by November 1. However, that deadline was extended last month to the end of November. (See Is Trouble Brewing for Brocade, Broadcom?)

Now, with the CFIUS review effectively bypassed, the road looks clear for Broadcom and Brocade to complete their deal. 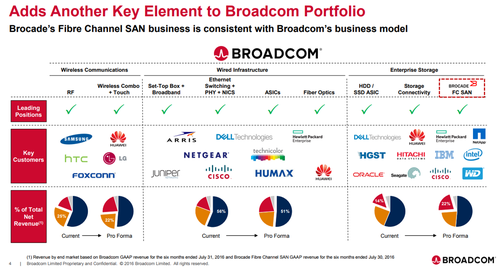 Above, Broadcom outlines how Brocade fits into the business portfolio.

Broadcom was a US-based chip company before it was bought out by Singapore-based Avago last year. By moving ownership back to the states, the company is gifting President Donald Trump with a public relations win related to his campaign promise to bring more businesses and jobs back into the US. According to the Associated Press, the relocation won't directly lead to new Broadcom jobs in America, but the company says it will increase domestic spending on research and engineering.

Meanwhile, assuming the Broadcom deal for Brocade can now proceed, the way also clears for Arris Group Inc. (Nasdaq: ARRS) to pick up Ruckus Wireless (now part of Brocade) in a deal that's contingent on the Broadcom buy. That secondary deal is part of an Arris plan to expand further into the wireless market, and to open up a new sales channel with enterprise customers. (See Is Ruckus Right for Arris?)