In 2019, eight of the top US telecom companies spent a total of $67.36 million on lobbying, according to numbers from the nonprofit research group the Center for Responsive Politics using data gathered from the Senate Office of Public Records as of January 23, 2020. 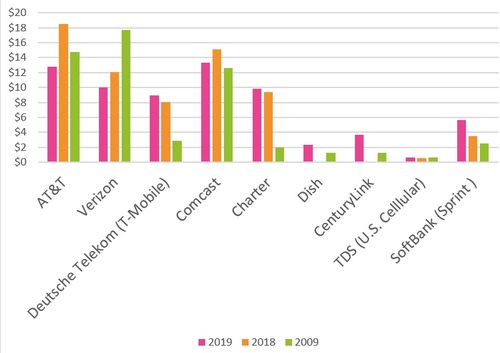 In millions, this is the money that top US telecom companies spent in 2019, 2018 and 2009 on lobbying in Washington, DC.
(Source: the Center for Responsive Politics)

Although the $67.36 million that telecom service providers spent on lobbying in 2019 might sound like a significant amount, it is only slightly more than those same companies spent in 2018, when their lobbying dollars totaled $67.23 million.

Deutsche Telekom, which is the majority owner of T-Mobile, spent $8.92 million on lobbying in the US in 2019 and $8.10 million on lobbying in 2018. That's a dramatic increase from the $2.84 million that it spent ten years ago on lobbying. T-Mobile, of course, has been a very active player in Washington for the past two years as its executives worked to get the necessary regulatory approvals for the company's proposed $26.5 billion acquisition of Sprint that was announced in November 2018.

SoftBank was fairly active in its lobbying spend. The Japanese company, which is the majority owner of Sprint, spent $5.65 million on lobbying in 2019 compared to $3.51 million in 2018. It should be noted that in 2009, Sprint spent $2.51 million on lobbying, but that was before SoftBank took control of the company in 2012.

Lobbying topics
So what was all that money for? Although these companies often compete against each other, many share the same regulatory goals, stretching from net neutrality to robocalling.

For example, Comcast, AT&T, Verizon, CenturyLink and Charter all paid lobbyists to help defeat the Save the Internet Act. This bill reclassified Internet access as a telecom service subject to common carrier regulation, reinstating the net neutrality rules that were eliminated by FCC Chairman Ajit Pai. In April the bill was passed by the US House of Representatives but it is currently being blocked by Senate Majority Leader Mitch McConnell.

Another popular cause pushed by these telecom operators and their lobbyists in 2019 was the Stopping Bad Robocalls Act, which provided stiff penalties for scammers who make illegal and unwanted robocalls. This initiative was passed by the US House of Representatives in July and then combined with a similar anti-robocalling initiative in the Senate. President Trump signed the legislation into law on December 30, 2019.