Dell Technologies today announced financial results for its fiscal 2020 first quarter ended May 3, 2019. First quarter revenue was $21.9 billion, up 3 percent, and non-GAAP revenue was $22.0 billion, up 2 percent over the same period in the prior year. The company generated operating income of $550 million1, compared to an operating loss of $153 million last year, and non-GAAP operating income of $2.2 billion, compared to $2.0 billion last year. Net income was $329 million or 1.5 percent of revenue, non-GAAP net income was $1.2 billion or 5.5 percent of non-GAAP revenue, and adjusted EBITDA was $2.6 billion or 11.7 percent of non-GAAP revenue. Cash flow from operations was approximately $682 million for the quarter with diluted earnings per share of $0.38 and non-GAAP diluted earnings per share of $1.45.

Also at Dell Technologies World 2019, the company extended its leadership in edge computing with the announcement of Unified Workspace, which integrates solutions across Dell devices and services, VMware Workspace ONE, and Secureworks to simplify the entire device lifecycle for IT. 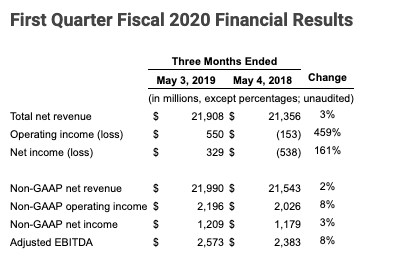