IBM unveiled details on Thursday of how it will integrate Red Hat products and services, following its $34 billion acquisition. And the strategy is surprisingly simple and compelling. Simple enough to fit in a tweet.

That's 180 characters -- plenty of room for emoji and animated GIFs.

As part of the multicloud strategy, IBM is integrating its own products with Red Hat. Red Hat OpenShift will run on IBM Cloud, and on the IBM Z mainframe and LinuxONE mainframe operating system. IBM's consulting and services professionals will support Red Hat technology. 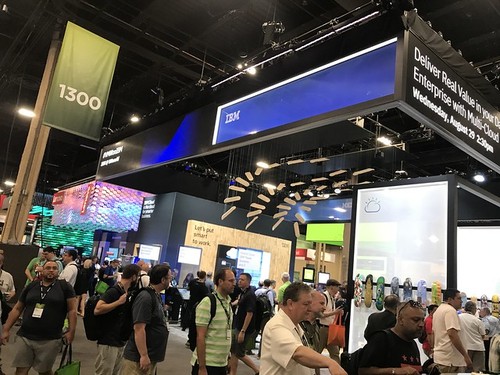 "We're taking our middleware, data and AI, and cognitive portfolio, and we've been rebuilding that that as containerized, cloud native properties that can run on top of the Red Hat platform," Robinson says.

The integration pre-dates the Red Hat acquisition; it's been going on two years, he says.

"How do you manage multiple public clouds and also private cloud? You have to be consistent, and that's the role of Red Hat," says IBM Fellow Bala Rajaraman. The combination of IBM and Red Hat technologies provides consistent operation for applications that move as needed across containers using Kubernetes, on any cloud, on premises, in the edge, or on 5G networks, he says.

For telcos and other services provider, the combined IBM and Red Hat software can help accelerate the move to Network Functions Virtualization (NFV) by providing a hardened, end-to-end certified technology stack, Rajaraman says. Telcos are moving to a standard platform, running containers with Kubernetes and OpenStack, which IBM and Red Hat provide strong support for.

While IBM says it's aggressively and equally supporting all clouds, it sees a special role for IBM Cloud for applications requiring a high degree of security, control and compliance. IBM also excels in bare metal support, the company says. "In certain cases, and for certain classes of workloads, that's where IBM Cloud excels," Rajaraman says.

IBM named Sprint as a marquee customer for Cloud Pak for Data. Sprint is using the software with Watson Studio and Machine Learning to generate client insights, according to the IBM news release.

These details about IBM's Red Hat integration answer a big question about the aftermath of the deal: How will the products and services, formerly from two separate companies, integrate?

Another big question is whether the two companies will fulfill a promise that Red Hat would remain independent, able to partner both with IBM  which we're seeing happen here  and IBM's competitors.

Dell and VMware face similar market conditions: Dell owns a controlling interest in VMware, and those companies are pursuing multicloud strategies, like IBM and its Red Hat business unit, both together and separately.

harryking123 8/22/2019 | 5:50:59 AM
Network security There is some couple number of users are not capable to handle any kind of network issues in their platforms. There are some solutions provided by how to remove a hacker from my phone that will be more beneficial for them.
Reply | Post Message | MESSAGES LIST | START A BOARD
EDUCATIONAL RESOURCES
sponsor supplied content
SAP Cloud Platform
SAP Cloud Platform Solution Brief
Googles Big Enterprise Cloud Bet
Educational Resources Archive
More Blogs from Wagners Ring
Podcast: Don't Call Us an SD-WAN Provider  Cato Networks