Breaking down the 2021 cloud, automation and virtualization predictions

During my self-imposed quarantine away from my now typical reading diet of literary giants, I took some time to see what people were writing about the telecom world, since this is the usual time for year-end wrap-ups and new year predictions.

I agree with Iain Morris that the crystal ball's usefulness is stymied by the realities of today's world and appreciated his clever approach of predicting non-events. In that spirit, I will forego predictions and instead share my reactions to some of what I've seen coming across the Light Reading network and elsewhere. I inject what I hope is received as a small dose of reality into discussions of important telecom trends.

I also very much appreciated the excellent reporting in Sue Marek's article about cloud-native networking – a sandbox I played in for many years. However, I am still not convinced that it's going to be as big a driver in 2021 as some might think. As described in the article, telcos need a compelling reason to deploy new infrastructure. This has always been the case and will always be the case, regardless of what technology we're talking about.

I don't know that any telco would deny the promise of cloud-native, but it's more than just a notion. We're talking new hardware platforms, re-architected software, new management software, different operational models – and do all of this while keeping existing systems running undisturbed. And don't forget that this new software requires a different set of skills than most telcos have at the ready, and compete for the same talent as the public cloud providers.

Yes, 5G will be a huge driver of cloud-native solutions, but as Iain's article states, 2021 may not be the year it delivers significant value to telco operators. I can't imagine many, if any, telcos doing much with converting legacy applications to containers/cloud-native. It's up to their suppliers, anyhow, and like their telco customers, it's all about the business case, and it's a hard one to justify for many functions. OSS/BSS (another of my former sandboxes) brings similar challenges, as Sue's article also highlights  cue the analogies about changing the engine on an airplane in mid-flight.

I remain unconvinced that automation will reach the heights of zero-touch anything any time soon. I'm sure I've said it before, but it's difficult for me to see any telco taking its hands off the wheel and let management systems just do their thing. Am I saying there is no place for automation? No. Repetitive provisioning tasks, troubleshooting, running test scripts  all valid automation targets. I am also not trying to downplay the human cost of the automation that is already happening and will continue to do so. I'm as big a cheerleader for technology as can be found but I like to throw a bit of reality into the mix sometimes too. It's also useful to consider automation in the context of the NFVi definition work mentioned earlier. The less variation that needs to be considered, the easier it is to automate. 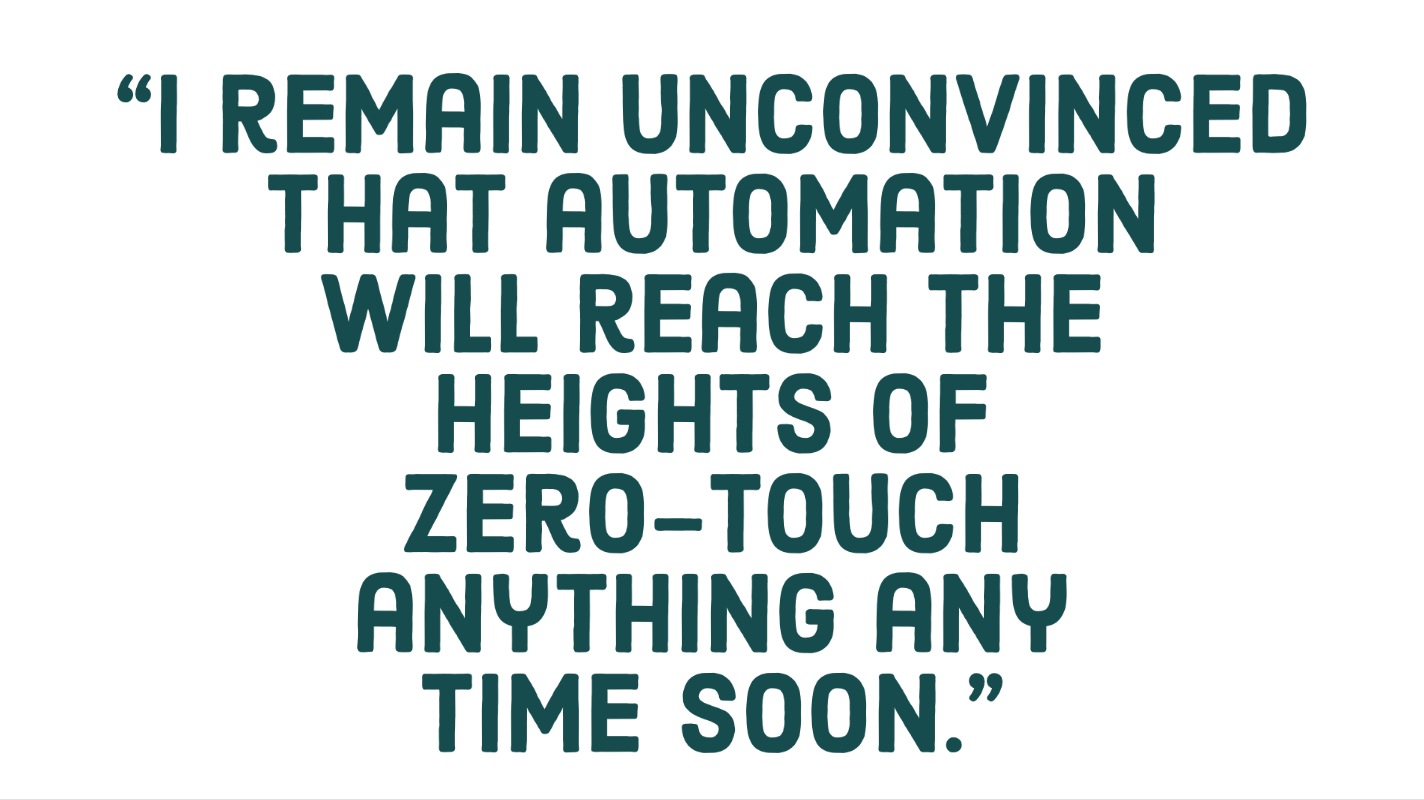 As much as the approach to infrastructure has moved from a vertically integrated model to a disaggregated one, frequently based on open-source, the work of integrating elements from different suppliers remains as challenging as ever. To maintain differentiation and minimize friction with existing systems, every telco needs some tweaking to "standardized" solutions, increasing costs for themselves and their suppliers. I was intrigued and perhaps heartened that OPNFV and CNTT (Common NFVi Telco Taskforce) have joined forces to facilitate the development of NFVi that minimizes the need for customization. It's worth noting that whether NFVi supports VNFs or CNFs isn't really an issue here – the challenges remain the same. If anything, CNFs makes things even more complicated because of the higher number of discrete functions that need to be deployed, integrated, scaled and maintained.

What about the public cloud?

Another of Iain's excellent articles discussed the risks of telcos moving critical functions to the public cloud. While the days of "five nines" are (mostly) behind us, people still expect to have today's equivalent of a dial tone at all times. Internet commerce drives a substantial and growing part of the economy, so it's not like the public cloud providers have any less responsibility. Historically, people have had higher expectations of the phone company because that's what they were trained to do the phone companies themselves.

But telcos are increasingly deploying infrastructure that looks a whole lot like that of the hyperscale cloud providers, meaning the risk remains, but recovering could be easier since they'll have control. I'd like to take this opportunity to make a plea for people discussing this trend. Please be clear about what functionality you're referring to when stating telcos are "moving to the public cloud." There is a difference between moving internal email systems, OSS/BSS and network functions. Each is usually managed by a different organization so while the headline might scream Telco 123 is going to AWS, one should look under the covers to see what's really happening. End of rant.

Lastly, I intended to write about this one sooner, but I was also struck by the announcement of another telco-cloud ecosystem  this one from IBM. While I'm always happy to see more collaboration, I'm also always somewhat circumspect about these types of announcements as well. As a telco, it's helpful to have one-stop shopping from procurement, implementation and support standpoints. I wonder, though, if the promised savings are always as easy to achieve, as you're still talking about herding cats. And as my former colleague, James Crawshaw, pointed out, an ecosystem can still result in vendor lock-in, something telcos vehemently say they want to avoid. Still, if this ecosystem means telcos can accelerate their journey to cloud-native, I'm all for it.

With school resuming in another week, I will soon be immersing myself back in the world of literary theory and definitely non-light reading. However, when I come up for air, I will continue to drop in and check on the goings-on in telecom. I may no longer be knee-deep in the hoopla, but I remain committed to bringing perspective to a space that continues to fascinate.