SANTA CLARA, Calif. -- Intel's claim to have reinvented itself as a "data-centric" company is baffling at first. Hasn't Intel, and every computer vendor, always been "data-centric?" Computing has been data centric since Herman Hollerith first used punch cards to record data well more than a century ago, in the 1890 US Census.

Yes, computing has always been about the data, but today's emerging applications, in areas such as the Internet of Things and AI, require data in quantities and at speeds that paralyze previous technologies. Today's computing requires new hardware, storage and networking -- fundamentally different from anything available previously, according to Intel.

Intel's transition is also driven by a change in its own business. The client computing business is becoming less important, and the company needs to change to survive. So you can view Intel's "data-centric" business as "everything that's not the PC and mobile."

"We are hungry to get after this market in 2018, 2019 and beyond," said Navin Shenoy, executive vice president and general manager of the Data Center Group at Intel, kicking off a day of briefings for press and analysts on Wednesday. Five years ago, roughly a third of Intel's revenue was data-centric; now it's half, Shenoy said. 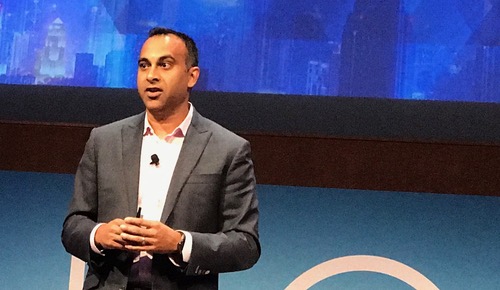 But not everything is rosy for Intel.

Intel is staking a big part of its future on AI, and it's late to market there, fighting incumbent Nvidia Corp. (Nasdaq: NVDA) and several emerging companies. (See Intel Reinventing Xeon for AI  but Is It Too Late?)

And it also faces a challenge from Advanced Micro Devices Inc. (NYSE: AMD). "If AMD can get into Google and Amazon, Intel will be in trouble," Gartner analyst Martin Reynolds tells Light Reading. Hypercloud providers would like to see more choice, to help drive better terms and pricing. "The big guys would like a lever," Reynolds says. He sees the probability of that happening at about 30%.

The data-centric business specifically excludes Intel's traditional strength in desktop and laptop processors, although those businesses remain important to the company.

The transportation industry, which is ripe for disruption, is a good example of the data-centric transformation, Shenoy said. The autonomous car, in particular, is "an end-to-end-compute process which exercises all the assets of Intel. Autonomous vehicles will run on data, just like today's vehicles run on gasoline."

Intel got into the autonomous car industry in March 2017 with the $15.3 billion acquisition of Mobileye, based in Israel, which had been developing self-driving technologies for nearly 20 years. (See Intel, Mobileye $15.3B deal has cloud under the hood.)

An autonomous car requires high-definition maps, both located in the cloud and gathered in real time from cameras located on the vehicle, Shenoy said. Each car generates 4TB of data per hour. The car's own data is sent to the cloud, and combined with data from other vehicles to create models, requiring increased need for cloud computing resources.

"And then once the models are deployed they have to blend intelligence in the cloud with intelligence and vision streams in the car to enable continuously updating realtime high definition maps," Shenoy said.

The car will require ten times the intelligence of today's cars, and compute and network intelligence on the network edge to handle delivering data and intelligence in an efficient way, Shenoy said.

"As the car is driving down the highway, it will need to be continuously updated," Shenoy said. The car itself has only 2040 kilometers of data on board.

And that's just one industry. Altogether, the change to data-centric computing represents a $200 billion total addressable market by 2022 -- add client and mobile, and the market is north of $300 billion, Shenoy said.

Next page: The enterprise slump