In the time of coronavirus, software is a good place to be. Just ask Bhaskar Gorti, the boss of Nokia's fledgling software business. While the rest of his employer's organization was in decline, Gorti's unit managed to grow in the recent first quarter. Unlike the loss-making networks business, more than six times as big from a sales perspective, it also recorded a profit.

A business that deals in intangible code seems tailormade for the era of lockdowns and social distancing. But the standalone software business was first announced to the wider world more than three years before the virus appeared, built on Nokia's existing applications and analytics expertise. Now a unit generating about $3 billion in annual sales, its first-quarter revenues were 13% up on the year-earlier amount. More impressive was the 70 million ($77.7 million) in operating profit, after a 7 million ($7.8 million) loss in the same part of 2019.

Profitability has recovered after a bold effort by Gorti to replace a gallimaufry of software tools with a single platform, described by Nokia as a common software foundation (or CSF). "If every product has its own platform and its own logging mechanism and database, we are duplicating effort for every part," he tells Light Reading. Cost savings are not the only benefit, either. "The velocity at which we can introduce new products and R&D productivity have gone up." 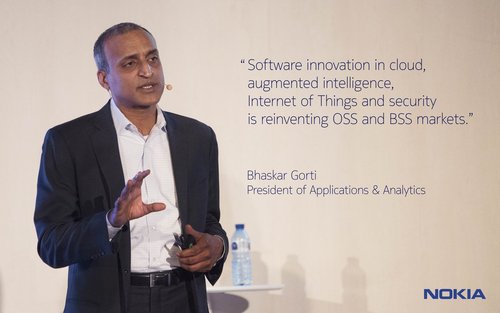 The overhaul looks timely, as well. Telco software is increasingly shifting into the cloud, a move that may gather pace during the pandemic. With its CSF, Nokia can profitably develop products for either a customer's own infrastructure or a public cloud. "The most difficult thing was the R&D aspect and we feel very good about that," says Gorti. "Now it is about the commercial transition."

So what proportion of sales currently falls into the "software-as-a-service" (SaaS) category? Gorti is not citing figures, saying only that Nokia does a "good percentage today which is recurring" while conceding the SaaS business is still not "at maturity." Helpfully enough, a sales organization dedicated to software has been taking shape as part of Gorti's unit. Partnerships with Dell-owned VMware, IBM-owned Red Hat and Amazon Web Services could also prove important.

Whether selling on-premises or cloud products, however, Gorti's main aim this year is not for sales to grow but for profitability to keep rising. "The margin profile will continue to improve," he says. "A typical software business by moving to SaaS can smooth the wallet a bit, but all along the free cash flow and operating profit should continue to improve."

While he is not disclosing any profitability targets, the major investments that produced the CSF are now behind his organization, he says. Hailing better productivity, Nokia Software spent about 458 million ($508 million) on R&D last year, 6% less than in 2018, while its operating profit soared 31%, to 589 million ($654 million). "Of course, we are spending a significant amount on enhancing the platform, but a higher proportion of this is going into business logic and application logic," says Gorti.

Software in a time of COVID-19
Coronavirus has thrown up a new set of challenges in this area. Think of R&D and most laypeople conjure up images of messy labs populated by technicians in white coats conducting weird experiments. Software R&D has never had this chemistry-class resemblance, and yet it has still benefited from the physical colocation of teams, says Gorti. With most of its R&D staff now working from home, Nokia has been introducing "virtual white boards" and other useful tools to aid socially distanced collaboration.

For security reasons, it has also had to treat employees' homes as individual sites. The task of securing them and making sure staff can access Nokia's systems and other online tools has fallen to Gorti, who since January has worn a second hat as Nokia's chief digital officer. "The other thing is how to scale," he says. During the pandemic, about 1 million video conferencing sessions have taken place from employee homes each month for R&D or customer-related reasons.

As far as software goes, there has been minimal disruption. If anything, says Gorti, R&D productivity has even improved "because people can't do much outside." But other bits of Nokia have not looked quite so perky. Reporting first-quarter results, CEO Rajeev Suri blamed a 200 million ($200 million) hit to revenues mainly on supply chain issues in components-rich China. And Kristian Pullola, Nokia's chief financial officer, warned that restricted access to customer premises could be a problem in the second quarter.

It's one that could even affect the software business, acknowledges Gorti. "Of course, there will be certain top-line fluctuations that happen because when we deliver a product to a customer there is testing and suchlike that is required for us to get acceptance," he says. To minimize a need for access to customer premises when restrictions are in place, Nokia is looking even more intently at fully automated systems requiring no manual intervention. "How do we dramatically increase zero touch operations to deliver for this new way of working?" says Gorti.

What also excites him now as a potential future growth story is the 50% of the telco software market currently served by smaller vendors, systems integrators touting customized products and operators' in-house teams. "It is putting a lot of pressure on opex and maintainability and total cost of ownership [TCO] for the operators," he says. "That is a big market we are going after from a TCO and overall lifecycle point of view."

This ambition largely explains the recruitment of Fran Heeran from Vodafone early last year. Heeran previously led Vodafone's cloud, automation and virtualization efforts, having earlier worked for the Finnish vendor. Now he's back at Nokia as an executive with experience that bridges the vendor and operator worlds. "The biggest factor is not the technology but the resource pool and skillset," says Gorti about the transition to cloud-native platforms. "We are hiring quite aggressively for key talent and in many parts of the world."

Telecom software and services total revenues by vendor worldwide in 2018 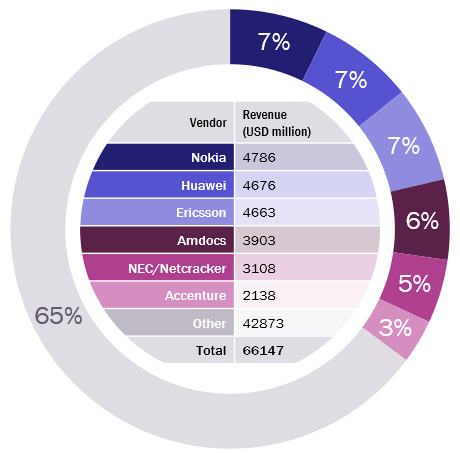 Is further takeover activity a part of his plans? In 2017, Nokia paid 347 million ($385 million, at today's exchange rate) for Comptel, a Finnish developer of service orchestration and intelligent data products, rounding out its own business and operational support systems. Gorti says he would be interested in similar acquisitions if they would speed up progress in a particular field, but he rules out any moves based entirely on market share gains. "When you go and make acquisitions just for market share, you end up with duplicate platforms you have to support for a long time."

As things stand, he seems content with Nokia's portfolio of offerings, which make the Finnish company the biggest player in an extremely fragmented market for software and services, according to Analysys Mason. Still, Nokia accounts for only 7% of that entire market, reckons the market-research firm, giving it a huge target for growth in the future if it can fend off the challenges. Right now, Gorti's focus on the bottom line is just what the earnings-squeezed Finnish firm needs.