Aqsacom CEO Gilles Blanc said his company is ready for 5G as we met at last month's NFV & Carrier SDN event in Denver.

What's more, he's convinced his company is one of the only vendors doing lawful intercept and data retention that can handle both the technical complexity of NFV and the throughput challenges of 5G networks. The company's upcoming software release (ALIS), due out later this month, was designed with these new network complexities in mind, he said.

Blanc's company -- bootstrapped, privately held, and independent -- is focused on what he now calls lawful cyber intelligence. It's a friendly way of saying he helps law enforcement agencies (LEAs) spy on suspected criminals.

Once upon a time, spying on bad guys was done by wiretapping phone calls. Now companies like AQSACOM are racing to keep up with the social media, VoIP and voice communications and all kinds of other network-based activities happening on a plethora of devices. This helps LEAs build profiles of people that, for whatever reason, seem to be up to no good.

To the untrained ear (mine), it sounds similar to what Facebook does to its customers every day. But Aqsacom said it only works with Western countries that have laws around lawful interception of data. No Big Brother stuff, he said. Just helping LEAs do their jobs more efficiently.

Blanc, a French Army veteran who served in the Gulf War, worked at France Telecom R&D during its first GSM network deployments. He later moved to Orange France, where he worked on studying quality of service differences between GSM networks. The team he was part of there was called AQSA. 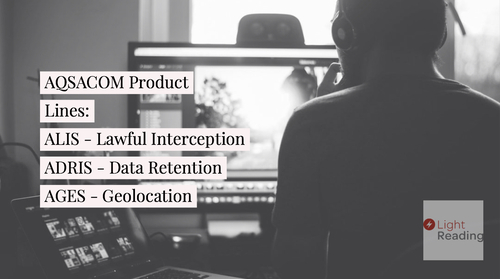 As lawful intercept evolved to become lawful cyber intelligence, Blanc's expertise helped him build and sell his software solution and find a customer in his former employer. More Tier 1s and other carriers followed and Blanc said his company now has deployments in six out of the ten largest telecom groups in the world.

Aqsacom's Release 8 will include some very specific cybersecurity enhancements recommended by law enforcement experts and significantly increased throughout capabilities, the company said. Since it works with agencies and governments all over the world, Aqsacom is convinced it has an advantage in hearing about the most urgent lawful intercept requirements as new cybersecurity threats emerge.

Blanc, a telecom engineer, said his initial design for Aqsacom's mediation engine was better than the hardware-focused solutions that came through IT vendors because he was looking out over a longer timeline. That future-proof mindset is still at work. Blanc said he mandates that each new major release of the platform must be able to grow throughput by at least 50%.

As I hear the Aqsacom platform described by Blanc, it sounds akin to a supercomputer OS that also does deep packet inspection and high volumes of data buffering and encryption. He said it can work in virtualized, distributed networks because it separately manages and coordinates the data flows that are captured from multiple network points so that no targeted traffic metadata or content is missed. And it all has to be done without dropping packets, as some intercept laws make an incomplete capture of data inadmissible in court.

To be clear, Aqsacom itself is not protecting anyone from anything. It only works with carriers to provide LEAs with data -- and tools to manipulate the data -- without disrupting the carrier network or services. Lawmakers are the ones that need to address how far government agencies can go when it comes to looking at the contents of machine-to-human, human-to-human and machine-to-machine communications on 5G networks.

"Criminals are the earlier adopters to any new technology," Blanc said. "They move much faster than legislation, unfortunately."

Being able to provide network operators with data segregation, encryption, and isolation -- without being married to a centralized, hardware-based solution -- is a tall order for 5G networks, but Blanc is confident that Aqsacom's years of focus will pay off.

Blanc said he's stuck to one set of customers, in one industry, with one incredibly complex software solution. Now that complexity is going to be tested in a network environment we've never really seen before. "Under 5G, you take everything and you multiply it by ten," he said. "It's going to be huge."