Huawei Wages Lawfare Against US

Anyone who has attended Huawei's 20,000-strong customer extravaganzas or visited its stadium-sized trade show booths will know it executes modern marketing as well as just about any western firm.

But when it comes to other side of public communications, in managing information flow around a crisis, it behaves like a traditional Chinese company.

Instead of disclosing key information and being as transparent as possible, Huawei brass stick to their talking points and deflect awkward questions.

So while it has been subject to all kinds of criticism during the past six months, a lot of it unfair, Huawei has not helped its case by not disclosing any meaningful information.

It could, for example, shut down those who claim it is a People's Liberation Army (PLA) front company by revealing its top shareholders.

It might also respond to some of the specific and damaging allegations against it, such as the reported bugging of the Africa Union Headquarters in Addis Ababa, the incentives program that rewards staff for stealing competitors' secrets and the fraud allegations against CFO Meng Wanzhou.

So when Huawei calls a press conference to announce it is filing suit against the US government to challenge "the constitutionality" of an Act that bans US government agencies from purchasing any technology from Huawei or ZTE, you wonder if the company's management knows what they're getting themselves into. (See Huawei Sues the US Government.) 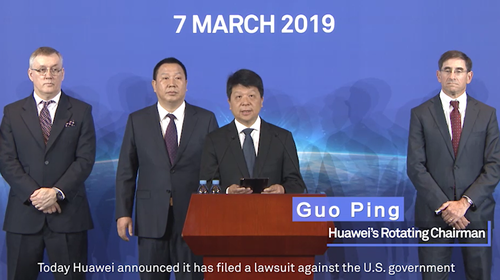 "If Huawei wants to maintain a presence in the West, it has to assure its other customers that it was not worthy of the ban," Eric Crusius, a partner at law firm Holland & Knight, told the paper.

But the suit also opens up a legal discovery process in which US government lawyers can demand, for example, any communications between Huawei and the Chinese government, the communist party and the PLA.

That's a level of disclosure way beyond what we have seen from Huawei so far.

In filing its suit, Huawei is taking aim at Section 889 of the 2019 National Defense Authorization Act (NDAA), which bans all US agencies from using Huawei gear and prohibits the granting of loans to any organizations, such as rural carriers, that are Huawei customers.

Announcing the lawsuit, rotating chairman Guo Ping hammered some familiar points, but that doesn't mean they weren't worth making.

For starters, there's the weak case against Huawei. Congress had "repeatedly failed to produce any evidence to support its restrictions on Huawei," he said. "We are compelled to take this legal action as a proper and last resort."

Guo also didn't miss the opportunity to take some swipes at the US in general. He and his colleagues generated some amusement by pointing out that AT&T's faux 5G service is running at just 200 Mbit/s: By contrast, LG Plus in South Korea has clocked 1.3 Gbit/s using Huawei's kit.

And the Huawei team didn't miss the financial angles: They claim Huawei's gear is around 15% cheaper than the equivalent from their main competitors, a discount that would amount to $20 billion in capex savings for North American carriers during the next four years if, in theory, Huawei technology was used.

As Guo has said before, the vendor has been willing to work with the US government to address its security concerns. But that is unlikely to happen, even if Huawei can win its case. The mood across western nations has soured sharply against China in the past 12 months.

But the main leg of this lawsuit, alleging that the Section 889 prohibitions are unconstitutional because they discriminate against Huawei, does not appear promising. Russian IT security firm Kapersky Labs filed suit on the same grounds last year but lost.

Lawyer Crusius told scmp.com that a win for Huawei was "improbable, but not impossible."