"NASA created a spacecraft that would take off like a rocket and land like a plane in order to be cost effective," said Simlot, VP of virtual services development and support at CenturyLink, speaking at the Intel Network Builders Summit preceding Light Reading's Network Virtualization & SDN Americas event.

"They had to be adaptable and be agile to meet the changing needs of their customers. That's what's going on with us right now," Simlot said.

Service providers need a similarly adaptable mindset to meet the explosion of network demand. By 2022, 28 billion devices will generate 150,000 gigabytes of data per second, Simlot said. That data will need to be transmitted, and will require bandwidth, storage and compute to be useful. 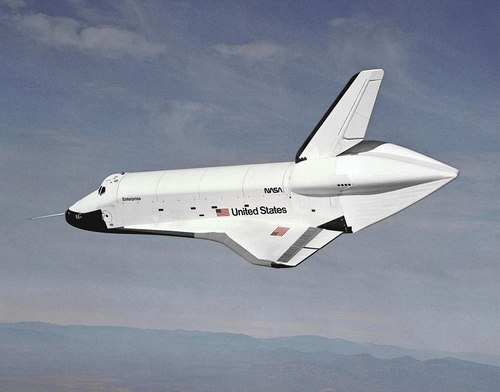 The space shuttle Enterprise. Also, see here for a photo of the same vehicle with the crew of another spaceship of the same name.
Deep dive into real-world issues and virtualization deployment challenges with industry leaders. Join Light Reading at the annual Network Virtualization & SDN Americas event in Dallas through Thursday. Register now for this exclusive opportunity to learn from and network with industry experts. Communications service providers get in free!

The "most interesting and exciting applications," such as the tactile Internet, virtual reality, augmented reality, real-time video analytics and (to a lesser extent) retail robotics all need the more challenging combination of high bandwidth and low latency, Simlot said. With AR, for example, as engineers repair equipment, overlays must move along with their heads and fingers; in retail robots may move along aisles, scanning SKUs and merchandise for restocking purposes. Any delays frustrate decision-making and mistakes could add up.

"If the decision is two minutes later, the robot is on the other side of the store. It doesn't make sense," Simlot said.

Gray lining, silver cloud
Cloud is changing enterprise network demands, with 83% of enterprise workloads entering cloud by 2020, according to Simlot. Additionally, 46% of businesses say choosing the right infrastructure to best support each workload is a challenge and 49% of businesses have trouble managing multiple clouds.

"But we love cloud because it is so fast to bring up an application," Simlot said. "The other day I was turning up a WiFi controller, and I could spin up the application in the cloud in 15 minutes. It would take me more than 15 minutes just to find a screwdriver to screw the WiFi controller in the wall."

But network agility must match cloud agility to succeed in the enterprise. "If you can spin up an application in 15 minutes but network connectivity takes 30 days, that doesn't work," Simlot said.

CenturyLink specializes in fiber networks: Fiber is essential to delivering network agility for a new generation of apps, he said.

"The network is the data center," Simlot said. By 2025, three-fourths of enterprise-generated data will be created and processed outside the data center or cloud, up from less than 20% today.

CenturyLink divides the cloud into four tiers, based on latency: Tier 1 is 0 msec, directly on the customer premises; less than 1 msec is a hop away, near the data source; 1-5 msec is the market edge, such as the entire Dallas area, and the fourth region is the global cloud, including the traditional cloud data center, at 10-200 msec latency.

To improve its own network latency, CenturyLink announced an investment of "several hundred million" dollars in infrastructure that it claims can put its network within 5 msec of 98% of US enterprises.

Enterprises want to put workloads where it makes economic and strategic sense, Simlot said. For example, a security camera that's programmed to contact key security personnel if it detects motion after-hours, requires compute on premises. But other applications -- like word processing or email -- make more sense to have their compute stored in the global cloud.

Wireless networks like LTE and 5G are faster than before, but travel less distance. As a result, fiber must be closer to the wireless network to rapidly transmit data, maintaining bandwidth and latency, Simlot said.

CenturyLink leverages virtualization to avoid vendor lock-in, Simlot said. The MSO prefers vendors that use standard APIs or Kubernetes because it can more easily bring them onto its network and work with existing equipment. New vendors must integrate across the entire workflow, from customer orders to billing, said Simlot. With APIs, it can work, he said.

Enterprises want to outsource networks and servers, liberating their internal IT departments to focus on business-critical applications. This creates opportunities for service providers, which now can put an inexpensive x86 server at the customer edge. The network and server hardware, including cloud connectivity -- everything up to the hypervisor -- is CenturyLink's responsibility. The enterprise customer handles everything else itself.

Despite virtualization, APIs and cloud, some enterprise workloads still require specialized hardware. In those cases, CenturyLink must communicate those needs to the customer, Simlot said.