AT&T is focused on building virtualization and intelligence into the customer edge and network edge for 5G applications, Goodell said, kicking off the Network Virtualization & SDN Americas conference here.

"This is not science fiction for us. We are in the process of delivering it today," Goodell said.

Putting intelligence in the customer edge means moving compute to the customer location, which allows for local processing of data on site, providing privacy for companies that need it, and application level controls, Goodell said. Manufacturing is one application demanding customer premises intelligence.

Intelligence at the customer edge is integral to a project where AT&T is working with Rush Medical, a connected hospital, to enable real time image processing and analysis by medical staff at the location. Additionally, facial recognition monitors patient pain thresholds to alert doctors and nurses to change their therapeutic approach to the patient. And the hospital is using AR and VR for doctor training. "This is happening today. We are deploying this solution as a real example, as we speak right now," Goodell said. 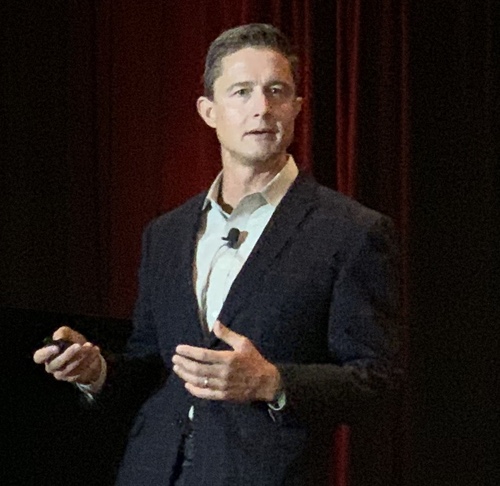 AT&T's Josh Goodell.
Deep dive into real-world issues and virtualization deployment challenges with industry leaders. Join Light Reading at the annual Network Virtualization & SDN Americas event in Dallas through Thursday. Register now for this exclusive opportunity to learn from and network with industry experts. Communications service providers get in free!

The other part of the network middle is putting compute in the network itself. "We call this network edge compute," Goodell said. AT&T is pushing compute deeper into metros, in central offices, to optimize wireless and wireline networks, enabling 5G low latency.

"The big difference between this approach and on-premises is that this will span an entire metro, whereas the other approach is centralized to a location," Goodell said. Network edge compute can bring roughly 20 millisecond latency to a 200-300 mile radius.

As an example of the type of application that can be permitted by network edge compute, Goodell cited AT&T's partnership with Vorpal, a company developing technology to monitor rogue drones to track their location, and also triangulate back to find the operator. Goodell said that seemed to him at first like a niche application, but drones are an emerging security threat, piloted by saboteurs and terrorists. Goodell noted that drones may have played a role in the recent attacks on Saudi Arabian oil facilities.

Today, AT&T is moving to a virtualized network in over 70 countries. The next step is to make the network "truly intelligent," Goodell said.

"In the not too distant future it will be possible for a surgeon sitting in Boston to operate on a patient in Boise, Idaho, 2,000 miles away in an operating room using 5G technology," Goodell said.

Massive device connectivity is another new capability of 5G transformation, Goodell said. While WiFi can support hundreds of devices per access point, and LTE can support thousands, 5G can support millions. That may sound like overkill, but emerging applications need that kind of connectivity. A single manufacturing location might support 35 million sensors in one building.

Duh! 9/19/2019 | 4:52:16 PM
No, it is overkill "While WiFi can support hundreds of devices per access point, and LTE can support thousands, 5G can support millions ... A single manufacturing location might support 35 million sensors in one building."

So you're going to use a few macro-cells to provide complete coverage of  a building of that size with tens of MHz of spectrum? I don't think so. More likely a lot of small cells with hundreds of devices.

I have yet to hear a convincing reason why 5G instead of less expensive, less complex, no outsiders required, WiFi 6 in manufacturing.  Still listening.