DALLAS -- AT&T Summit -- In her keynote earlier this week, AT&T's Melissa Arnoldi said the old way of building enterprise apps is dead and microservices are the future of software development.

AT&T Inc. (NYSE: T) unveiled its microservices supplier program this week, which Arnoldi, president of technology and operations for AT&T Communications, said is an effort to move away from the development of monolithic apps to creating customized apps by combining microservices. Instead of deploying or scaling new services in months, updates to enterprise apps can be updated in days, she added. (See AT&T Launches Microservice Supplier Program with IBM.)

"Believe it or not, we have more than 2,200 applications in our IT ecosystem today, and we plan to lead the industry in migrating these strategic apps to microservices  so we can create agility, speed and scalability," said Arnoldi. 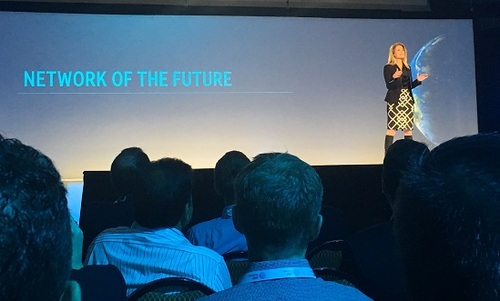 AT&T's Melissa Arnoldi delivered a keynote on the "Network of the Future."

AT&T and long-standing partner IBM Corp. (NYSE: IBM) are collaborating on the design and development of microservices for the microservices supplier program. Arnoldi said over the next two years AT&T and IBM will focus on developing microservices "in areas such as sales, order and enterprise. And yes, we're looking for other suppliers to jump on board with us."

By the end of the year, AT&T plans to deploy 200 microservices and will ultimately deploy thousands, said Arnoldi.

In an interview with Light Reading, Todd Carlton, VP of shared platform and engineering at AT&T, said microservices will enable AT&T to speed its time to market, reduce its cost structure for generating changes to products and services, and reduce its risk footprint by "only touching the things that need to be modified in a given case."

He cited the ONAP network automation platform as an example. "In using the microservices within ONAP, we're rapidly evolving the experience to be one of consistency and rapid deployment," said Carlton.

Another AT&T-internal example is Work Flow, which is utilized by AT&T technicians in addressing customer issues. Carlton said the Work Flow microservice strings together specific changes across 19 systems, which in the old Work Flow process had to be individually modified for end-to-end integration. In addition, AT&T created a bundle of microservices to develop, manage and track contracts across business products, which saves time and effort in contract management.

"We have a great opportunity to begin decomposing these large processes, these large monolithic applications down to much more atomic, more individualized services that solve specific problems as opposed to aggregating all software at one centralized application or set of applications," said Carlton.

AT&T isn't the only service provider eyeing microservices -- both Deutsche Telekom and Verizon have been vocal about utilizing microservices to reduce network complexity and increase automation. Last month at SDN NFV World Congress in The Hague, Peter Konings, EMEA products director for Verizon, said "microservices are absolutely important" to meeting customer needs and urged suppliers to embrace the idea of microservices. (See Verizon Lays Out Virtualization Demands and DT: Brutal Automation Is Only Way to Succeed.)