In each case, MEF network operator members were driving the development and building on the work of other organizations, including the TM Forum and the Open Networking Foundation .

LSO is the umbrella effort of MEF, launched two years ago, to define the necessary service management and orchestration capabilities for what it calls the "Third Network" (increasingly virtualized software-driven networks). Unlike the other groups with which it cooperates, MEF is focused on end-to-end service delivery and accelerating that process, Bar-Lev emphasizes.

"Instead of doing things manually and taking months, or automating the process on a bilateral basis, the service providers feel there is a need to get consensus on [inter-carrier interfaces]," Bar-Lev says. "The MEF has been the home for this discussion, creating sample reference code that our members can use to start understanding how they adapt their systems and get this work done."

The LSO Presto interface addresses the interaction between various network resources and an SDN controller, starting with the OpenDaylight controller. MEF is still working on finalizing LSO Presto APIs defined in MEF Interface Profile Specifications (IPS) and expects to publish those soon. In the meantime, the Presto SDK will let MEF members experiment with the process. 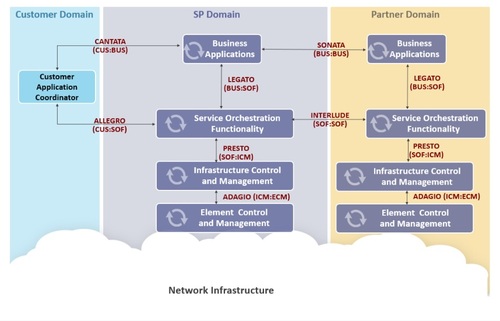 "This really extends the ability for the service provider to take full advantage of their SDN implementations and integrate it more effectively with their operations and business systems," Bar-Lev says. CenturyLink was the lead operator on that work.

Continued work on both interfaces as well as other key elements in the LSO framework is ongoing, and will be announced in November at MEF's own event. Presto and Sonata are two of the seven interfaces defined in the MEF LSO framework.