WOW began virtualizing network functions more than a year ago in a push to automate service provisioning, connection optimization and network security for business services customers. But it quickly discovered that picking off network functions one by one only created a siloed operating environment, rather than one in which software-driven functions could be effectively automated at a system level.

What began as an effort to virtualize individual network functions has taken on a much larger project scope. Speaking at Light Reading's Future of Cable Business Services recently, VP of Technology Integration Torryon Coleman noted that WOW's goal now is to "create a virtualized environment to enable all products and services."

And the company is well on its way to doing so.

"There's actually a cap and grow strategy so that new services will come on into the virtualized environment," says Coleman. "We think we'll be in that mode probably Q4 ... of next year." 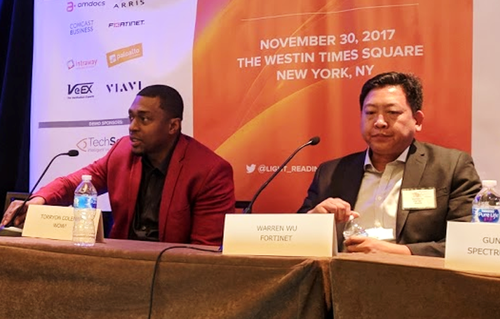 WOW's Torryon Coleman, left speaks next to Warren Wu of Fortinet at a Light Reading event.

A large part of making the transition to a virtualized environment comes down to focusing on back office transformation. Coleman notes that WOW may have become over-excited early on about introducing new VNF technologies, but it has since shifted its efforts to focus more heavily on integration and alignment across the network.

"A lot of this has exposed how siloed we were from our BSS/OSS environment," comments Coleman. "So phase one of this is really about aligning BSS/OSS back office with the network and then enabling those two to talk back and forth seamlessly. That's going to be a major focus for 2018."

Coleman also says, however, that he's not in a hurry. Despite wanting to take advantage of virtualization benefits like network automation, he believes it's more important for WOW to move carefully during this process than to move quickly. He thinks the industry and WOW's vendor partners need time to mature.

"It's been about a 12- to 18-month journey on what we think is a five-year window to maturity around virtualization," says Coleman.

Coleman's take on the industry's maturity level lines up well with other discussions of cable network virtualization. Speaking at the SCTE Cable-Tec Expo in October, several executives argued the need for the cable industry to develop a framework that will allow everyone to speak the same language when it comes to orchestrating VNFs. (See Cable Virtualization Needs a Solid Framework.)

"Moving down the path without having the framework, you rapidly, in the context of the time we're dealing with, come to the realization that if you're not careful, you're not going to end up with this amorphous cloud entity that knows everything and does everything. You're going to end up with seven clouds," said Jeff Finkelstein, executive director of advanced technology at Cox Communications Inc. at the time.

Developing a framework is particularly important as operators begin to rely on a broader array of virtualization partners. Today, many cable companies have chosen anchor vendors to power early VNFs. Comcast Corp. (Nasdaq: CMCSA, CMCSK), for example, has partnered with Versa Networks for its SD-WAN service, but it doesn't expect to rely solely on that vendor in the future. Comcast is building its own ActiveCore platform to orchestrate multiple VNFs, and while SD-WAN is the first VNF to debut, Kevin O'Toole, SVP of product management for Comcast Business, has stated bluntly that ActiveCore "is not a one-trick SD-WAN pony." (See Comcast Packs More Powerful SD-WAN Punch.)

Meanwhile, Coleman believes it will still take close cooperation between operators and their vendor partners to create a virtualization ecosystem that supports interoperability. Over the next year, he says, "I think we're going to be closely coupled with vendor partners and helping them mature, continu[ing] to help them advance the product offering and what we're consuming from them to deliver to the customer."