Alcatel-Lucent Spins Up Its SDN

Nuage Networks, the Alcatel-Lucent spin-in, is launching what it considers the most complete software-defined networking (SDN) product to date.

Two things to note: It's all software, with no direct mention of Alcatel-Lucent's routers. And it's an actual product, due to begin trials in a couple of weeks, rather than a vague architecture. AlcaLu is launching both the startup and the product, called the Virtualized Services Platform (VSP), at an event Tuesday morning in Santa Clara, Calif.

Nuage is targeting the data center, aiming at one of the basic problems SDN is meant to fight: the inability to quickly connect one virtual machine to another, due to the way the network works.

Mobile-heavy vendors such as Ericsson AB have pointed out that the connections in question already happen automatically in the case of mobile phones. (See Ericsson Claims SDN Advantage and Ericsson Gets Trendy for MWC.)

And indeed, that's the model Nuage is using. The company's demos in Santa Clara are meant to show that an enterprise user can spin up a virtual machine and have all the underlying networking happen automatically and without thinking, in the same way that a cellphone connects itself to the network. 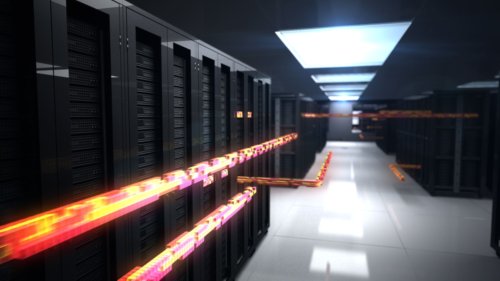 From Nuage's promo video. The multicolored bars represent network connections being created on the fly. In the sequel, they go insane and chase people around the data center.

A couple of things to note. The VRS code must be downloaded into a virtual switch -- which means the virtual switch has to be programmed to accept it. Nuage is making the VRS open-source; it works with VMware Inc.'s latest Open vSwitch implementation and will eventually work with all other hypervisors, company officials say.

And the VSCs are federated, meaning they can be distributed around data centers and connected to behave like one big controller. These connections are done via the BGP routing protocol. It's similar to the distributed controller developed by Contrail Systems, the startup that was acquired by Juniper. (See Juniper Cracking SDN Open.)

Note that nothing here has anything to do with an Alcatel-Lucent router.

"We needed these guys to think as broadly as they needed to," says Basil Alwan, president of AlcaLu's IP division and the boss of Sunil Khandekar, Nuage's CEO.

At the same time, Nuage got to borrow from AlcaLu's intellectual property. Nuage used the AlcaLu BGP routing stack rather than creating one of its own, for example. We'll explain why in a minute.

A whole lot of "V" names
What all this is supposed to solve is the difficulty of setting up virtual LANs to connect the virtualized elements of a data center. That process is manual and slow, and if an outside entity is involved -- say, if an enterprise wants to create connections inside a cloud provider's network, it can be even slower.

Nuage's products, all of them software, work together to automate the creation of these east/west connections. When a virtual machine spins up, the pieces send messages to one another like a telegraph. The VSD (directory piece) knows the details of that virtual machine -- policy, security, which physical network it's on, and so on. It determines what kind of network connection is needed and relays those instructions to the VSC (the OpenFlow controller), which then programs the VSR (the router piece) with the appropriate routing instructions.

This is the kind of thing most vendors are talking about -- a way to let users spin up SDNs without having to ask someone to configure the network.

But Nuage thinks it's taken a couple of extra steps. For instance, not everyone has automated the dialogue between the directory and the controller, Alwan says.

Moreover, early SDN protocols such as OpenFlow do most or all of their work at Layer 2. Nuage is taking the approach of building Layer 3 tunnels between virtual machines, but it does so without actually getting a router involved.

"What Nicira did is a fairly rudimentary Layer 2 overlay. I don't want to be insulting here, but there's a lot of good work that's happened since," Alwan says. "We're looking at how you support multitenancy and complex topologies."

Part of the importance of Layer 3 is its scale. Nuage is planning for its SDN to reach between data centers. Alwan wants to make a business of software-defined VPNs, replacing the MPLS-based virtual private networks used for connecting branch offices to enterprises.

The bigger point is that an enterprise user can do all of this without being aware of the network at all. In that sense, the Nuage demo is rather boring: The user clicks a virtual machine, and everything happens almost instantly.

"The guys configuring the business policies and the enterprise customer instances in the directory -- not having to understand IP addressing and subnets and all that stuff just makes it so much easier for these guys," says Lindsay Newell, AlcaLu's vice president of marketing.

Users can also monitor statistics and analytics related to their piece of the network, a feature that could be useful in multitenant clouds.

If they are able to sort out their internal organizational alignment ... (Nuage, CloudBand and Enterprise - 3 Silos), then Nuage will go places with the promise that they project !

Manas123 4/3/2013 | 7:56:54 AM
re: Alcatel-Lucent Spins Up Its SDN Not sure if you are following the conversation, so no point arguing - their controller is outside and running the dynamic routing protocol and not just the management system. the VR is not running the routing protocol.

Alex_Fduch 4/3/2013 | 7:49:20 AM
re: Alcatel-Lucent Spins Up Its SDN Thanks, you proved my point of view. Contrails solution is just big bunch of SW routers under common management system.
I'm sorry, but I can not see where is SDN here.
ALU could do the same: virtualize SR OS and combine their 5620 SAM with a Controller which talks to Hyperviser and tracks VMs creation.
But if you replace "virtualize SR OS" with ALU 7750 SR router you will get almost the same thing. But it the traditional world it is called - IP network under management and provisioning system umbrella with integration to OSS.
Reply | Post Message | MESSAGES LIST | START A BOARD

Manas123 4/3/2013 | 7:46:27 AM
re: Alcatel-Lucent Spins Up Its SDN Maybe you should read their drafts or watch their techfield day preso online - they dont run VR as a VM. They do dynamic routing and use XMPP to push both control plane and configuration. Also, firewall and load balancing is done in their VR

BTW - SDN is not equal to flow programming.-á

Alex_Fduch 4/3/2013 | 7:37:18 AM
re: Alcatel-Lucent Spins Up Its SDN Lacking details of Contrails realization, I can only speculate here using very blurry and generic description of the solution from Juniper.
But by my opinion Netconf for VR sounds a bit like not an SDN flow programming.
It is more like deploying a lot of traditional software routers inside VMs like e.g. Vyatta and use XMPP to configure new interfaces to VMs and NetConf to push routers configuration.
Even if Contrail's VRs are using static routes only - they are classical SW routers with all their pros and cons. This idea is far from SDN with its flow programming and "dump" and predictable forwarding planes.
Reply | Post Message | MESSAGES LIST | START A BOARD

Manas123 4/3/2013 | 7:29:48 AM
re: Alcatel-Lucent Spins Up Its SDN As I read this article more closely, it seems like they have openly taken cues from contrail - the analytics and stats closely resembles what the contrail guys were showing in paris
Reply | Post Message | MESSAGES LIST | START A BOARD

Manas123 4/3/2013 | 7:16:13 AM
re: Alcatel-Lucent Spins Up Its SDN Contrail was the first to talk about open standards - their southbound API is open-standard (XMPP) and they have published the Schema (in IETF) - so their southbound interface does not appear to be proprietary. Apparently, their-ávRouter is provided as open-source. Same thing for their SDN Controller - uses BGP for peering between Controllers and Physical Routers/Switches. Apparently, they claim to also support BGP and Netconf to their Virtual Router in addition to XMPP
Reply | Post Message | MESSAGES LIST | START A BOARD

Alex_Fduch 4/3/2013 | 7:08:17 AM
re: Alcatel-Lucent Spins Up Its SDN It is not proprietary in terms of interfaces and protocols.
VRS is an OpenSource switch and router based on Open vSwitch code.
VSC talks to VRS via OpenFlow, not proprietary API.
VSDs talk to each-other and peering routers via BGP. So, all connectivity is open and standardized.
Reply | Post Message | MESSAGES LIST | START A BOARD

What is unclear here is how is this strategy different from Contrail? They seem to have a distributed SDN controller based on BGP and vRouter in the Hypervisor supporting MPLS over GRE/UDP, VxLAN, etc?-á

Apparently, their SDN as a compiler approach makes the networking configuration very simple as well, based on the demo that they were showing at the MPLS WC in Paris.