SD-WAN startup CloudGenix has banked $65 million funding and disclosed ambitious plans to partner with telcos and other communications service providers.

But it faces a crowded market, dominated by 800-pound gorillas Cisco and VMware, and will have a tough time standing out and finding customers against many entrenched competitors, according to Heavy Reading analyst Sterling Perrin.

The C round of funding brings the grand total for the company since its 2013 founding to $100 million, with participants in the current round including existing investors Bain Capital Ventures, Charles River Ventures, Mayfield Fund and Intel, as well as new investors including ClearSky Ventures.

CloudGenix says its primary customer base is Fortune 1000 companies worldwide, including those in healthcare, retail, manufacturing, finance, banking, high-tech and hospitality.

For telcos, CloudGenix's SD-WAN provides an opportunity to extend into enterprise management services, while for managed service providers, CloudGenix lets them provide services over the cloud without getting tied down to a single telco or cable operator, CEO Kumar Ramachandran tells Light Reading.

Another claimed advantage for CloudGenix -- particularly with regard to telcos -- is that it can act as an alternative to NFV infrastructure for communications service providers looking to deploy services, such as security and unified communications, from the cloud. That's an extension of its existing strategy to provide SD-WAN capabilities that connect multiple locations for large enterprises, Ramachandran says.

"NFV is still struggling. It still has a long way to go," Ramachandran says. True enough: On the one hand, NFV has been gaining more traction recently, notably Equinix, Turkcell and Colt. And NFV is integral to VMware's and Intel's strategies. But many carriers are struggling to implement NFV, so much so that an emerging group is attempting to simplify the approach in an initiative known as "Lean NFV." 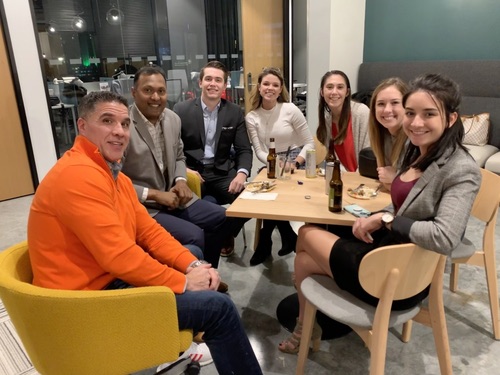 CloudGenix provides an alternative to achieve the same goals as NFV by bringing its SD-WAN to the customer premises and then partnering with other vendors to provide additional services from the cloud. CloudGenix is partnering with Palo Alto Networks, Symantec, and Zscaler for security, and Microsoft, RingCentral, Fuze, PagerDuty and ServiceNow for unified communications-as-a-service (UCaaS).

This approach is one already being used in Spain by Orange, which has been frustrated by NFV speedbumps.

CloudGenix distinguishes itself by its technology, Ramachandran says; the company provides network orchestration based on application sessions, rather than packets. CloudGenix monitors WAN response time, and application response time, to maximize user experience. CloudGenix doesn't just report on potential causes of problems; it automatically acts to mitigate problems, which makes it stand out from its competitors, the CloudGenix boss asserts.

Actually, however, that does sound a lot like claims from Cisco, VMware, Juniper, startups Apstra and Nyansa, and more, all of which claim to use various combinations of analytics and artificial intelligence to manage networks to optimize user experience.

"The description of what's being done by a lot of these companies are very similar," Perrin says. "I'm not seeing many differences in the overall feature set now."

Moreover, technology isn't the point in the SD-WAN market today, he says.

"The market is just insanely crowded. You've got several dozen companies kicking around SD-WAN," he says. CloudGenix, like other SD-WAN providers, started with a focus on selling to enterprise customers, and is now looking at the service provider market for fresh opportunities. But the problem with that plan is that the service provider SD-WAN market, like the enterprise market, is already crowded with multiple suppliers, Perrin says.

"The grass may look greener -- but it might not be easy to make the jump from enterprise to service provider," Perrin said. ("The grass might be greener but there are already plenty of cattle eating that grass?" I said. "Yes!" Perrin replied.)

How crowded is this market? Analysts IHS Markit ranks CloudGenix virtually at the bottom of 15 SD-WAN vendors at the end of 2018. 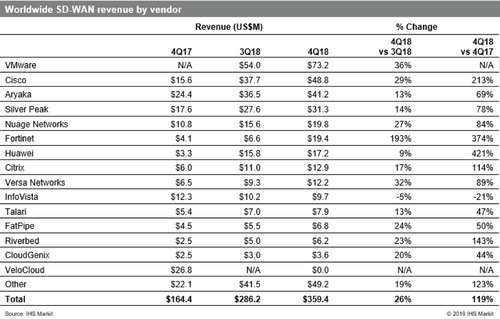 Also, CloudGenix's competitors have been making strides recently: Aryaka just this week scored a big SD-WAN deal with HMSHost, the world's largest global operator of food and beverage outlets at airports, train and service stations (Motto: "You know us from your expense report receipts."). Juniper launched a cloud SD-WAN service, Infovista relaunched its Ipanema SD-WAN, Versa expanded from the US to Europe. And Cisco scored a double-coup, partnering with both AT&T and Verizon on 5G SD-WAN services.

In that crowded market, service providers look to relationships as much as technology to close a deal, Perrin says. "If you don't historically sell to service providers and you're trying to come into this strategy now, you're at a huge disadvantage there," he said.

Service providers also look to channel partners, where Cisco is very strong, Perrin said. CloudGenix comes up lean in that regard, with one it said it could name publicly: Wipro.

Service providers weighing up SD-WAN vendors look to customer references as well, Perrin says. And CloudGenix couldn't provide any it could publicly name.

It's not that technology is worthless, Perrin says -- a vendor can win out on sheer performance, reliability, security and scalability. But the vendor has to prove it. And in the absence of proof, carriers look to market share, customers, revenue, and branding, says the Heavy Reading analyst

"Buyers are getting confused, they're looking for more clarity and simplicity about how they deploy these things," Perrin says. "Why take the big risk when there are options out there? Service providers are looking to play it safe with vendors."

Drymarchon7 4/17/2019 | 10:52:13 PM
CloudGenix In A Crowded Field While analysts paint a noble position regarding the crowded SD-WAN ecosystem; CloudGenix stands to progress its value proposition by several strategies. One in particular is targeting the small to medium sized operators much like it has done within the Enterprise sector. In addition there are still strategic channel partners CloudGenix can leverage as well. I like their position to be honest. Anthony McCray KLS Advisors, LLC
Reply | Post Message | MESSAGES LIST | START A BOARD