Can 128T & SoftBank Spark a Sea Change for SD-WAN?

128 Technology is delivering a "tunnel-free" flavor of SD-WAN with SoftBank Corp. that could potentially shake up the way SD-WAN services have historically been deployed. Branded "SD-WAN Type X" -- the SD-WAN service utilizes session-based routing instead of overlay-based SD-WAN.

"128 Technology is doing SD-WAN as it should have been done from the start if we had looked at the problem systematically instead of solving it symptomatically," says Tom Nolle, president of CIMI Corporation and member of 128 Technology's advisory board. "This is the first tiny wave of a sea change in the SD-WAN service space. Once anyone with credibility -- and SoftBank has it -- starts to sell a real, true secure, session-layer based SD-WAN implementation, it's going to become incredibly difficult to sell anything else."

As the SD-WAN market continues to grow with little consolidation so far, the 30-plus vendors providing SD-WAN services face the challenge of differentiating their product in a crowded market -- as do the service providers delivering SD-WAN as a managed service. Nolle says SoftBank is likely aware of the need to "differentiate itself in a competitive market."

128 Technology, a startup founded by the founders and former officers of Acme Packet, aims to separate from the herd with a novel approach to SD-WAN by utilizing what they call "Session Smart Networking" or "Secure Vector Routing."

"It's the how in terms of what we do that makes it very different," says Tim Ziemer, vice president of Worldwide Sales & Business Development at 128 Technology. "SD-WAN is one of many use cases that 128 can address; it's a superset of SD-WAN plus. We're innovating native IP routing itself. We're the only ones doing SD-WAN without tunnels and making the network behave much more like an application."

Ziemer claims 128T's approach to SD-WAN can improve latency and security by the way packets are authenticated and authorized by the router. 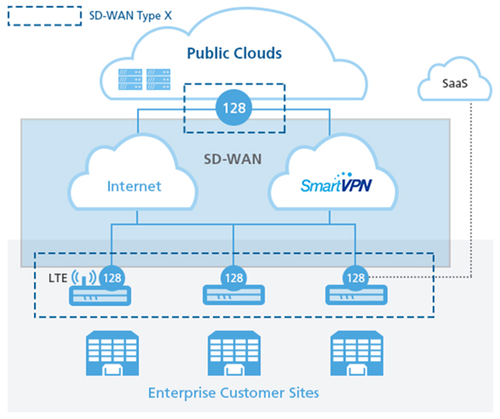 "Security is the function of the session layer," explains Nolle. "If I have a session virtual network, then I have created an intrinsically secure network, not one I have to add firewalls to or access control to. If that intrinsically secure network happens to be able to overlay a combination of MPLS, VPNs and Internet-connected branches, I can then offer an SD-WAN service that is truly differentiated from all the others that are out there."

Eye-opening potential
Ray Mota, CEO and principal analyst for ACG Research, echoes Nolle's assessment that the announcement of 128T's partnership with a tech behemoth such as SoftBank could be an "eye-awakener" for the SD-WAN market.

"On top of some of the other customers 128 has, this becomes an important one because people know how detailed SoftBank is with their vendor selection criteria, especially to expose their customer with," says Mota. "It's a wakeup call for people to look further into [this approach]."

For smaller enterprises with a few branches, the traditional approach to routing has less of an impact to network performance, adds Mota. However, larger enterprises with thousands of global sites have more complex networks and face more challenges in considering how scalability, fragmentation (traditional routing breaks up and resends packets which can get dropped on poor links) and security will impact the performance of their network traffic.

128 Technology re-writes source and destination IP through a NAT (Network Address Translation), says Mota. "They use metadata on the first packet for signaling the session. Every tenant is able to assign their own NAT address, which isolates the customer so they can keep their IP native, and bring in SD-WAN functionalities without using tunnels. They forward the session, not just the packet to become a session-oriented environment."