US pay-TV universe shrank by 857K subs in Q4

The US pay-TV industry took another shot to the chops in Q4, as the full universe of players combined to lose about 857,000 subscribers, versus a net gain of 56,000 in the prior quarter, according to MoffettNathanson's latest Cord-Cutting Monitor. 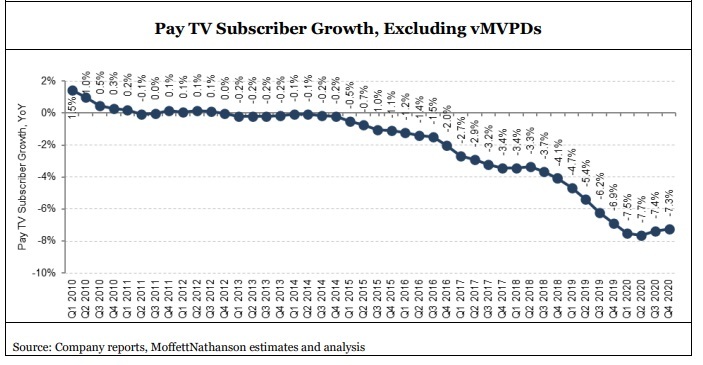 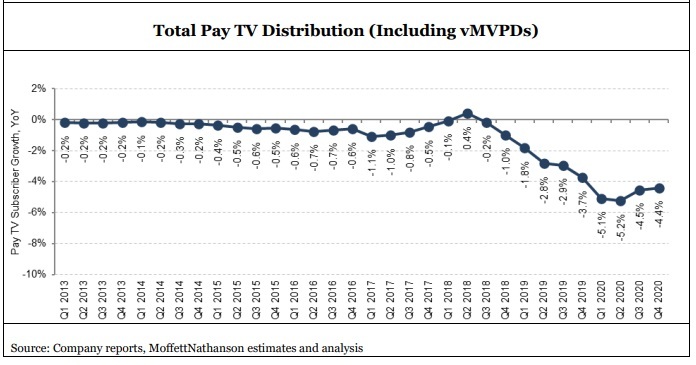 MoffettNathanson analyst Craig Moffett estimates that leaves 22.7 million US homes "totally outside the live TV ecosystem." That also translates to a residential penetration for pay-TV of about 60% of occupied households.

The "conversion rate" of vMVPDs (the rate at which traditional subs losses are recaptured by OTT-TV service providers) ended Q4 at a "dispiriting" 32.3%, Moffett noted.

"Two and a half years ago, the conversion rate briefly touched 100%, and there were widely held hopes that the media industry would keep eight out of every ten defectors from traditional distributors. Today that number is less than one in three," he noted.

Part of the issue is that consumers are not necessarily looking for vMVPDs to replace their existing bundles at a lower price, but instead are blowing the bundles up and replacing them with various subscription VOD and ad-based VoD streaming services.

"Price increases for the vMVPDs haven't helped," Moffett explained. "What has become increasingly clear is that SVOD and AVOD are simply better mousetraps for a very large number of customers, particularly those who aren't sports fans."

From a bigger picture standpoint, Moffett argued that a "new value chain" has formed in media that is not working in the favor of vMVPDs and is taking the "cable network layer" on a path toward extinction. 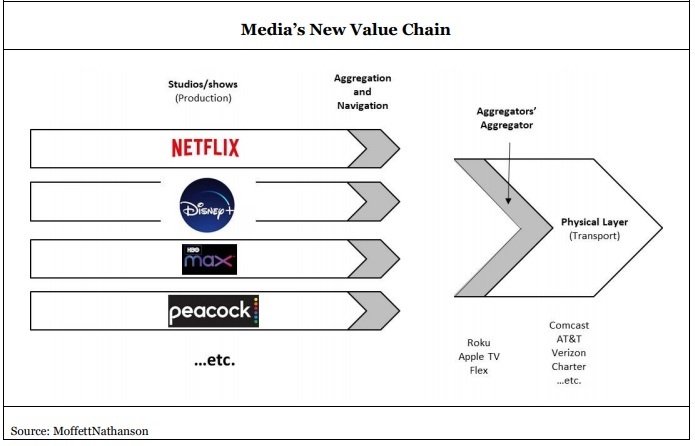 "If the network layer of the value chain does indeed disappear, the very premise of MVPDs and vMVPDs disappears with it," the analyst wrote. "There is no aggregation opportunity for a layer that doesn't exist, and the aggregation layers both higher up the value chain (shows) and further downstream (aggregators aggregator) are already well occupied."

In his view, Comcast, the cable operator, would represent the physical layer, but its Flex service, a streaming offering for broadband-only subs, falls into the "aggregators' aggregator" layer along with companies such as Roku.

"Flex, which we have argued has the potential to become a viable alternative to Roku, gives Comcast a runway to real value creation when customers do cut the cord," Moffett wrote.