Scrapping its initial plan to build its own pay-TV offering, Ting has taken the path of least resistance (and expense) and opted to recommend service from YouTube TV and Sling TV to its broadband customers.

"Ting Internet has linked up with YouTube TV and Sling TV to offer the best of cable without all the worsts (contracts, bill creep, and so on)," Ting explained in this blog post about its new streaming TV options. 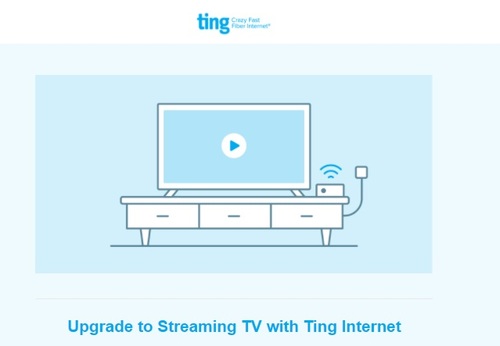 Ting has opted to partner with Sling TV and YouTube TV to provide broadband subs with a pay-TV option rather than developing its own IPTV platform.

Under this plan, people signing up for Ting's Internet service will be presented an option to also sign up for YouTube TV or Sling TV in parallel. Ting is also providing a couple of streaming hardware purchase options  an Apple TV 4K box or Amazon Fire TV stick.

Ting did not announce its formal business terms with YouTube TV or Sling TV. But it's possible that Ting will get a financial bounty of some sort for new YouTube TV and Sling TV subs that come through its door, rather than a straight-up revenue share with those two OTT-TV service providers.

These marketing partnerships give Ting a pay-TV option to present to its broadband customers in cities and towns such as Holly Springs, North Carolina; Charlottesville, Virginia, and Centennial, Colorado. It swill also provide exposure for Sling TV And YouTube TV to a Ting network that, as of Q2 2020, was projected to pass about 123,786 serviceable addresses.

Curbed pay-TV ambitions
Ting's TV ambitions looked much different in early 2019, when it was running a closed beta of an IPTV service it was developing with vendors such as Anevia (for transcoding) and Nordija (middleware). Back then, it was working toward a commercial launch in the first half of 2019. However, the company later realized that partnering with an existing virtual multichannel video programming distributor (vMVPD), rather than building something of its own, made much more financial and operational sense.

Speaking last month on the company's Q2 2020 call, Elliot Noss, president and CEO of Tucows (Ting's parent company), expanded on how and why the company's approach to pay-TV had changed.

"Our calculation was always how much would we need to spend on a traditional linear television product versus how many customers that would get us, that would not come to Ting Internet otherwise," he said. "For the past couple of years, it still seemed worth the investment. We now think the calculation has materially changed."

The "value and choice" of OTT options has been on the rise amid the ongoing cord-cutting trend, he explained.

Noss also noted that Ting discovered that "managing a traditional TV service from third-party relationships to engineering to monitoring to support seems like more of a burden than we had originally thought. For all these reasons, the effort and investment in a traditional linear television product no longer seems worth the incremental customers it would earn us."

Linked to this change, Tucows wrote off costs of about $1.5 million related to satellite hardware, middleware and set-top boxes associated with its original plans for an IPTV service.

"But we feel really good about taking a step back and re-evaluating the additional upfront and recurring investments we might have wrongly made going forward," Noss aid. "And, most importantly, we think our customers will spend less and have a better experience."

Ting is not alone in this thinking. While several service providers have developed next-gen pay-TV offerings that rely on streaming and platforms such as the Android TV Operating tier, other cable operators and ISPs have been working on options that lean on partnerships with vMVPDs.

Some examples include Verizon (it offers YouTube TV as an option for its relatively new "Mix & Match" program), WideOpenWest (partnerships with fuboTV, Philo, Sling TV and YouTube TV), Windstream (a pact with YouTube TV) and Google Fiber (agreements with Philo and corporate cousin YouTube TV).