Certain older devices in Comcast's X1 lineup are starting to show their age as the cable operator begins to roll out some new premium streaming apps  including CBS All Access and HBO Max  to X1 and Flex customers.

Comcast intends to extend support for those apps to some of those older devices in due course. In the meantime, the operator is allowing customers with non-compatible X1 devices to upgrade to newer, compatible X1 boxes for no added cost.

Comcast's Xi5 is an IP client for X1 and Flex that connects wirelessly.

Comcast acknowledges via its various FAQs that some X1 models are not compatible with some of the latest apps that have been integrated onto its cloud-powered video platform. Additionally, the operator is also alerting customers to that fact when they try to launch those apps on non-compatible devices and providing on-screen prompts that walk them through how to quickly order a replacement.

According to the FAQ for Comcast's CBS All Access app, a handful of devices in the X1 lineup are currently incompatible, including the Xi5 (a wireless IP client for Flex), the Pace (now CommScope) Xi3 IP-HD video client, the Samsung XG2v2 (a four-tuner device without local DVR storage), the Arris/Pace (CommScope) XG1v1 (a six-tuner video device with a local HD-DVR), and the RNG150 (an older, single-tuner, hybrid QAM/IP box that supports some baseline X1 features such as the cloud-based guide but does not support any Internet-based apps). 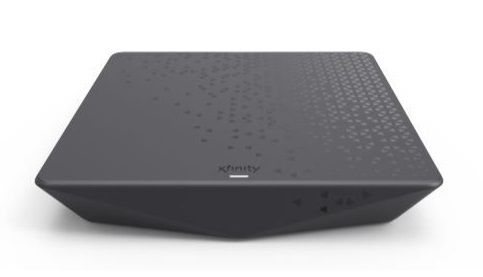 The Xi6 is another wireless client that also supports the 4K and HDR video formats.

The HBO Max app, which is being rolled out to X1 and Flex subs this week, is not compatible with the RNG150 or Pace XG1v1, according to this FAQ.

Other recently launched streaming apps also indicate that not all X1 devices are created equal.

For example, Peacock, NBCU's new streaming service, and the Hulu SVoD app also won't work on the RNG150 and Pace XG1v1. While the RNG150 does not support any Internet apps (but does support X1's native sports, stocks, weather and customer account apps), another support page notes that the Pace XG1v1 doesn't support any Internet apps that were launched in April 2020 or later.

The absence of support for certain streaming apps on older device models appears to highlight the challenges of managing and scaling these OTT integrations amid a device and software ecosystem that has expanded (and fragmented, to a degree) over an X1 history that extends back more than a decade.

Although other apps, such as Netflix, YouTube, Xumo and Pluto TV, are compatible with a much broader range of X1 devices, Comcast said the lack of support on some devices for an app such as CBS All Access is due to a technical limitation on select, older models. Other streaming platforms aren't immune to this sort of thing  Roku, for example, no longer supports certain apps, such as Hulu, on some of its older streaming players.

When Comcast launches an app on X1, the company said, it tests that app on each unique device type, and sometimes older models require the app developer to conduct additional testing. However, the pandemic has caused some of that work to be delayed.

The operator noted that a mutual decision was made by CBS All Access and Comcast to launch the app without those older devices in the interest of making it available to the majority of X1 customers. Comcast still hopes to extend support to some of those missing devices in the future.

Comcast said it is also working with ViacomCBS on plans pertaining to CBS All Access's relaunch as Paramount+ in early 2021, with the intention of offering the rechristened and expanded streaming service on all app-eligible devices should time and logistics allow.

Comcast plans to launch apps for Disney+ and ESPN+ in Q1 2021, but has not announced which X1 devices will work with those apps right out of the chute.

To help remedy these issues in the near term, Comcast is giving customers with non-compatible devices a way to order a new device with a few clicks of the remote. For example, when a customer tries to access the CBS All Access app on a non-compatible device, a prompt appears on screen to walk the customer through the process of ordering a new, compatible X1 device for no added cost. 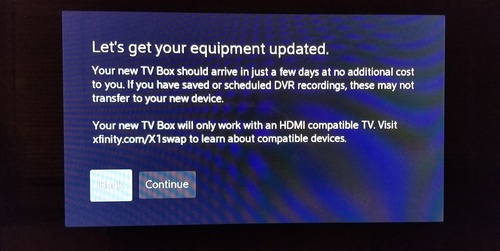 X1 TV screen prompts walk customers through the process of ordering a new X1 device that works with apps such as CBS All Access in just a few clicks. 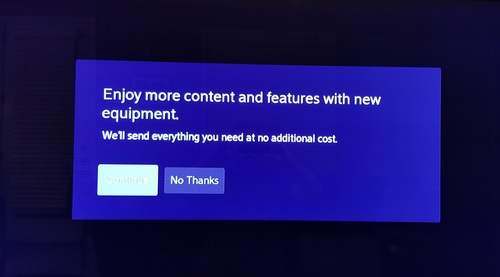 The whole process takes three or four clicks of the remote. I got some first-hand experience after discovering this week that three X1 devices in my home don't work with CBS All Access. The first replacement  a self-install kit for a small, IP-based HD client called the XiD  showed up at my door a couple of days later, and I had it up and running within 15 minutes. (As an aside, the XiD, an evolution of the Xi3, is an interesting, versatile model in that it's a hybrid box that can function as a QAM-based digital terminal adapter via the box's RF output, but can also be flipped/upgraded to a fully fledged X1 device. I now have 30 days to return the first Xi3 – either by dropping it off at a nearby Xfinity store or shipping it using a supplied, prepaid UPS label – that's being swapped out.)

Regarding the X1 device upgrade policy, Comcast said customers are not charged for the shipping of the new equipment, including additional boxes. Customers with devices that don't support OTT apps who desire a replacement can order up to two boxes at one time. They'll be able to order a third box, if desired, once their replacement boxes have shipped, the company said.

It's not clear what percentage of the X1 box device base faces app-incompatibility issues, but a support article pertaining to Comcast's X1 device upgrade program notes that "partner apps" from the likes of Amazon Prime Video and Netflix do work with "most" X1 TV boxes.