Sling TV added 16,000 subscribers in the fourth quarter of 2020, but Dish Network chairman Charlie Ergen believes that the OTT-TV service should have performed much better amid an ongoing cord-cutting trend that is hurting traditional pay-TV providers.

"We should have more market share there," Ergen said on Monday's earnings call. He believes Sling TV "stumbled" on the quality of the user experience, citing complacency with network upgrades. But Ergen also believes this is something that Sling TV, which has expanded its VoD vault to about 15,000 titles and added a free cloud DVR to its baseline service, can rectify in the first half of 2021.

Sling TV added subs for a second consecutive quarter, but the 16,000 adds, which extended the service's grand total to 2.47 million, fell short of the 25,000 adds that analysts were expecting.

Sling TV remains a cheap option compared to other virtual multichannel video programming distributors (vMVPDs), but "the growth here is painfully slow," Craig Moffett, analyst with MoffettNathanson, explained in a research note. Moffett pointed out that Sling TV's base is roughly the same size as at the start of 2019. 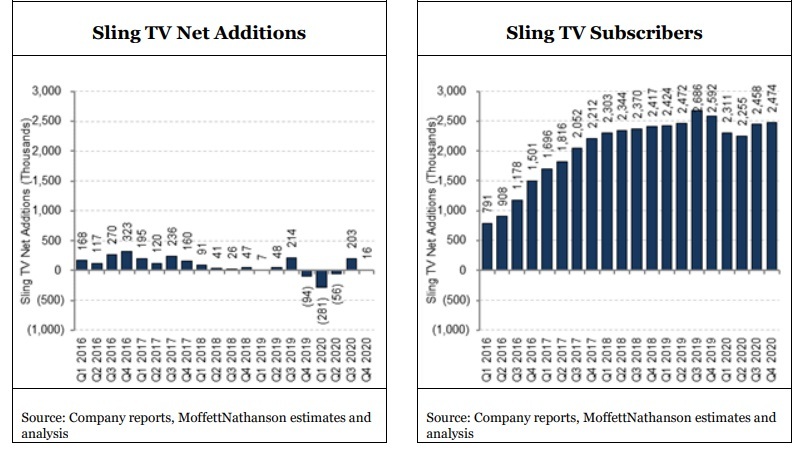 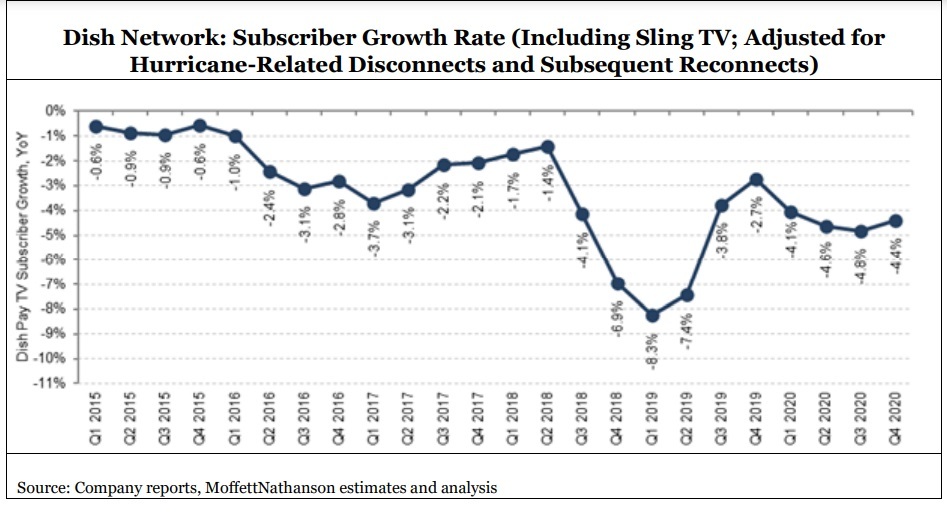 Still, Dish intends to stick to its knitting, particularly when it comes to satellite TV.

"Our Dish TV strength has been anchored in acquiring and retaining long-term profitable customers," Erik Carlson, Dish's president and CEO, said. "We've been focused on more rural and higher credit quality customer base, and we remain committed to that path."

But Dish continues to be wary of the flood of direct-to-consumer streaming services emerging from programmers and how they affect the value of programming and what Dish is willing to pay for it. "The world's becoming an à la carte world, with [programmers] going directly to their customers," Ergen said.

While the company views Sling TV as a complement to these new premium streaming services, execs also warned that the emergence of these options will factor heavily into new contract negotiations when they come up for renewal. When that same programming is offered through other streaming alternatives, "it's just less valuable to us," Ergen said.

And Dish doesn't fear dropping networks if it believes the price isn't right. Ergen pointed to HBO as an example, noting that Dish didn't lose many pay-TV subs as a result of not offering HBO when customers could just sign up for HBO's standalone streaming service.

Ergen also issued a subtle warning when asked to comment on Discovery+, a new streaming service that's expected to have 12 million subs by the end of February, and how that offering will alter Dish's stance at the negotiating table.

"It has to be a fair rate that we can burden customers that don't watch it... you have to run that math," he said. "It's not rocket science. We know our customers who watch it and how long they watch it."