Roku must 'ladder up' to original content to stay competitive  analyst

Roku nabbed the global distribution rights to Quibi's content library in January, a deal that will soon provide some much-needed exclusive fare for The Roku Channel, a growing business that face heated competition from other ad-supported streaming services.

If Roku is to continue to expand an advertising business now viewed as critical to its future, the Quibi deal might represent the mere tip of the iceberg and introduce some expensive new risks to Roku's business, according to MoffettNathanson analyst Michael Nathanson. 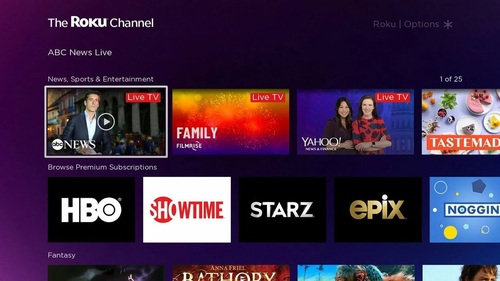 "In order to better compete with a new crop of now fully-integrated AVOD [advertising video-on-demand] competitors, we believe that Roku will have to 'ladder up' into original content (à la Netflix) and away from commoditized library content," Nathanson argued in a new report on the streaming giant, that begs the question: "Roku: Is It AOL or Is It Netflix?"

"The acquisition of Quibi's nascent library is the first step. This pivot will be expensive, filled with more execution risk and is not factored into our forecasts," Nathanson added.

There's already ample evidence of Roku's desire to take more steps, including a job posting for a lead production attorney to help the company expand its slate of original fare, with a focus on original episodic and feature-length productions.

Nathanson, who retained his "neutral" ranking on Roku despite the stock's rise since he initiated coverage last July, notes that Roku has benefited as one of the "best pure-play ways for investors to gain exposure to all-things streaming and the growth in AVOD."

The challenge ahead for investors, he added, is determining where Roku's revenues are being sourced from and how sustainable its growth will be. Nathanson believes that Roku player gross margins are "managed close to zero" to facilitate the growth of a platform that is generating cash through ad sales, subscription and transaction revenue sharing and the sale of premium subscription channels and software licensing deals.

The Roku Channel key to the long term

He estimates that advertising is driving some 80% of the revenues of Roku's platform business, and sees The Roku Channel becoming the company's primary driver of total revenues and profitability in the longer-term.

There are a few billion good reasons for all of them to be chasing AVoD, as Nathanson estimates that the market (excluding YouTube) surpassed $4 billion in 2020, up 37.5% from 2019, and will surge to nearly $18 billion by 2025.

The Roku Channel may be growing but it still only accounts for 1% of streaming minutes, roughly the same as Pluto TV and Tubi, Nathanson said, citing August 2020 Nielsen data. 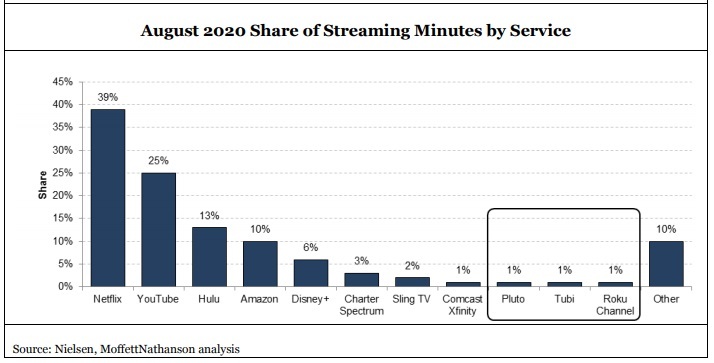 To maintain The Roku Channel's ad growth, the analyst believes Roku will need to acquire and invest in more exclusive content to level the playing field with AVoD services such as Pluto TV and Tubi. It will also have to maintain its focus on on-platform usage for The Roku Channels while also beefing up its support on other platforms, such as Amazon Fire TV, where it appears to be getting lackluster uptake so far. 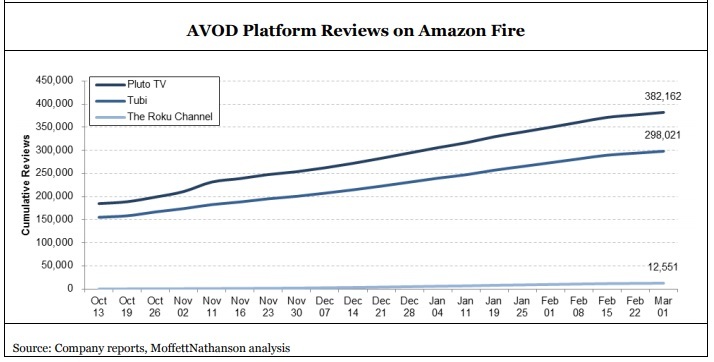 Another risk to Roku is the evolving market for streaming media players. HarrisX data shows that Roku and Amazon, with respective shares of 43% and 37%, lead the market, but should be wary of Google as it elbows its way in with new Chromecast streaming players outfitted with the new Google TV platform.

Nathanson sees Chromecast with Google TV as an emerging "serious third competitor" in the market. But he also makes note of Comcast's interest in expanding into the market on a global basis along with reports that the cable operator has been in talks with Walmart about a smart TV partnership.

"Any decision by Walmart, or another retail partner, to promote its own smart TV products is an evolving risk for Roku as well," he explained.

And that's not all. Vizio will likely add pressure in the platform game in the wake of a just-filed IPO. Meanwhile, LG Electronics is looking to expand its platform influence after announcing that more than 20 TV makers around the globe, including those that run brands such as RCA, Ayonz and Konka, have committed to partnerships centered on LG's webOS system.