Roku saw gains across the board in Q4, including a 24% boost in average revenues per user (ARPU) that bumped that total to $28.76. 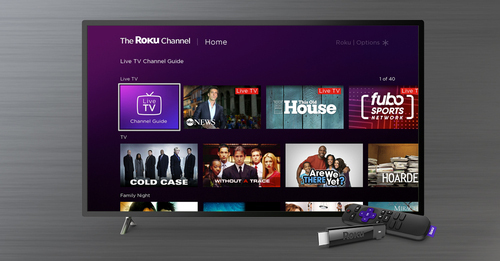 That total kept Roku ahead of Amazon's Fire TV platform, which has about 50 million active accounts, as well as other rivals like Google and Apple, and TV manufacturers such as Samsung (Tizen) and LG Electronics (webOS) that have developed their own streaming platforms. Comcast is also looking to get into the mix as it pursues a smart TV strategy and other out-of-footprint opportunities for its X1 and Flex platforms.

Roku engagement time was also up, as users tapped its platform to stream 17 billion hours of content in Q4, up 55% year-over-year.

Staying with content, The Roku Channel, a streaming aggregation service featuring both free, ad-supported content and access to subscription apps, ended Q4 with a reach of 63 million people, up more than 100% year-over-year. Roku said it intends to introduce content from the Quibi catalog to The Roku Channel later this year. Roku secured the global distribution rights for Quibi's short-form, premium catalog in January.

Roku's investor letter (PDF) did not make note of plans to develop and produce exclusive original content, but recent job postings indicate that it will be part of the plan going forward.

Light Reading will have more on Roku's results after today's earnings call.

Update: The exclusive, multi-year Quibi deal is a good fit for The Roku Channel's advertising VoD business, and is also the kind of agreement that Roku would not have been able to forge a couple of years ago, Roku founder, chairman and CEO Anthony Wood said on Thursday's call.

Wood didn't take the bait when asked if the Quibi agreement was a one-off or indicative or a broader plan to develop original content for Roku's platform, noting only generally that Roku is looking to expand how and where it sources content for its platform.

Wood also shrugged off a suggestion that adding Quibi to the mix will drive "channel conflict" with its other content partners.

"We don't view it that way," he said, noting that Roku is merely a content distribution platform that helps content owners of all shapes and sizes monetize their content. "There are only so many companies with the scale and expertise to launch a correct direct-to-consumer business," he added.

Roku was also pressed as to why an advertiser would want to buy ad time through Roku directly rather than go direct to a Hulu or Peacock that will also end up streaming content on Roku's platform. Scott Rosenberg, SVP and GM of Roku's Platform business, said it's a "both/and, not either/or" proposition for advertisers, but allowed that some advertisers might have broader deals with programmers that cover their traditional TV and streaming services.