The new, free digital channel represents another attempt by ViacomCBS, which owns Pluto TV and Showtime, to generate synergies from its content slate. 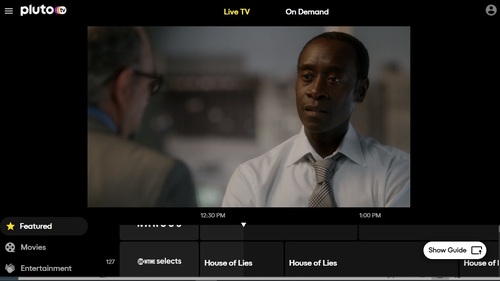 Showtime Selects expands Pluto TV's lineup with more premium fare while also providing viewers with a perpetual taste of Showtime's programming in the hopes that some will upgrade to the full subscription service. Showtime's standalone subscription OTT service costs $10.99 per month.

"We can handpick content from Showtime to reach a whole new audience on Pluto TV," Showtime Chief Marketing Officer Michael Engleman told Variety. "Our mission and Pluto TV's mission is to provide a pathway to upgrade to subscriptions... We'd like it to run indefinitely."

Showtime Selects launched today with about 250 hours of uncensored originals, including Showtime titles and series such as "The Affair," "Ray Donovan" and "Billions," plus early looks at first episodes of "Your Honor" (starring Bryan Cranston) and the 11th and final season of "Shameless," according to Variety. The report added that Pluto TV, which is running pre- and post-roll ads for shows streamed on Showtime Selects, is also developing and testing methods to directly funnel Showtime Select viewers to paid subscription options.

The launch of Showtime Selects also enters the picture as major programmers and studios continue to amplify their focus on streaming amid the ongoing decline of the pay-TV market. Pluto TV, acquired by Viacom in 2019 for $340 million, ended Q3 2020 with 28.4 million domestic monthly active users, up 57% year-on-year.

ViacomCBS recently elevated Pluto CEO Tom Ryan to the roll of president and CEO of ViacomCBS's new global streaming unit. That move comes ahead of the company's plan to launch Paramount+, a successor to CBS All Access that will feature more than 30,000 TV episodes and movies, in early 2021.