Orby TV, a startup focused on providing a prepaid satellite TV service, has shut down and is now directing its customers to switch over to Dish Network.

Click here for a larger version of this image.
(Source: OrbyTV.com)

"We are sorry to announce that Orby TV has closed its doors, and the Orby TV service has ended. It was an honor to serve you," Orby TV announced on its website.

Orby TV's focus on the prepaid market was short lived. Launched in 2019, the service's baseline package started at $40 per month for a lineup that included TNT, Discovery, Nickelodeon, Food Network, History, TBS, TCM, The Hallmark Channel, MTV, Comedy Central and Paramount Network, among others. Orby TV, whose satellite dish also included an outdoor antenna to access local channels, also marketed an Extras package that fetched an additional $10 per month, and sold premium subscriptions to HBO, Cinemax, Starz and Epix.

Orby TV's exit removes one of only a few prepaid pay-TV options on the market. Vidgo offers a prepaid streaming pay-TV service that starts at $55 per month following a discount that drops the cost to $10 per month for the first two months. Comcast also offers a prepaid form of its app-based Instant TV service that must be paired with the cable operator's prepaid Internet service. Comcast is currently pitching a promotion for new customers who buy a modem kit with 30 days of the operator's prepaid Internet service.

Orby TV has not revealed how many customers it had before shutting down. However, Orby TV is steering affected customers to a promotional offer through fellow satellite TV service provider Dish Network that offers an option to switch over for "as low as $100" when activation fees are factored in. 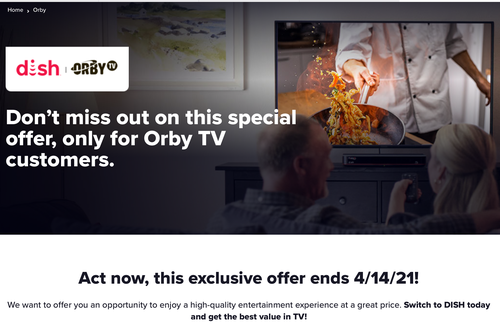 Orby TV hopes to bridge the gap for customers via a promotion with fellow satellite TV service provider, Dish Network.

That promo, good through April 14, is for Dish's "Flex Pack," a package featuring 50-plus channels, including AMC, HGTV, Food Network, History and Hallmark Channel (but no local broadcast channels), for $52.99 per month. The offer also tosses in a Dish "Wally" HD receiver that can be upgraded to a DVR by attaching a separable storage unit, along with a voice remote. The Dish offer also tacks on a free, standard-level pro install and an over-the-air digital antenna.