Peacock, the new streaming service from Comcast's NBCUniversal, has more than 26 million signups, up from the 22 million it had at the end of Q3 2020, NBCU CEO Jeff Shell said Tuesday at the UBS Global TMT Virtual Conference. 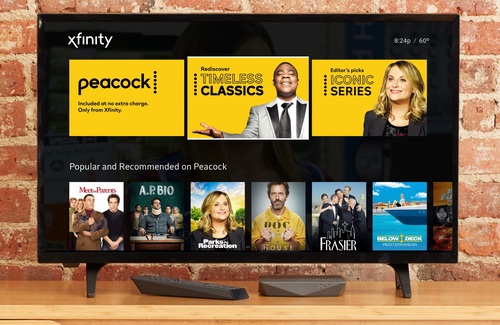 Peacock, which recently expanded its streaming distribution after inking a key deal with Roku, debuted in a limited form with Comcast pay-TV and Flex customers on April 15 and was launched nationally on July 15.

Peacock is one of several new streaming services recently launched or about to be launched by major programmers and studios, including Disney+ (73 million subs worldwide); WarnerMedia's HBO Max (12.6 million "activations," according to comments this week from AT&T CEO John Stankey); ViacomCBS's Paramount+ (a successor to CBS All Access launching early next year); and Discovery + (slated to launch on January 4, 2021).

Advertising is Peacock's primary revenue stream. "It is kind of a next-generation broadcast network," Shell said. He argues that there's plenty of room for a streaming service with a business plan featuring free, ad-supported options and paid subscription options in an OTT universe that comprises premium SVoD services such as Netflix, Disney+ and HBO Max.

Shell said Peacock's ad revenues are gathering steam and already having an impact at NBCU, which, like other programmers, has been seeing a decline in traditional, linear TV advertising revenue amid increased pay-TV cord-cutting and consumer pivoting to SVoD services.

Digital "is starting to fill the hole, and a lot of that digital is Peacock," he said. "From a top-line perspective, it's already having an impact."

So far, Shell said, Peacock is ahead of the metrics upon which it is being measured  signups, frequency of use, and hours of video consumption per month  without the benefits of the Summer Olympics in Tokyo, which have been pushed to 2021 because of the pandemic.

In the nearer term, Peacock will get exclusive rights to The Office, a series that's been highly popular on Netflix, in January.

Peacock will also bank on access to exclusive originals. Production on all TV shows and movies were halted or delayed during the earlier phases of the pandemic, but has since started to pick up.

Shell said NBCU has finished production on most of its 2021 film slate. "On the TV side, we're kind of rocking and rolling," with 31 shows currently in production, said Shell, who joined the conference virtually from the NBCU lot in Los Angeles.

"We've worked out the protocols. The first priority is obviously doing it more safely," Shell said. "I think we've been very successful. The positivity rate we've had in our test is like 0.28% or something like that."

Shell also weighed in on how the pandemic has temporarily altered the movie business, noting that NBCU is content with its exploration of a complementary "premium VoD" model that allows home rentals of certain new movie releases for about $20 as they are released to theaters.

Having a complementary home window for new theatrical titles "is a good thing for the economics" of the movie business, he said, pointing out that  even before the pandemic  there's been an underserved segment of the movie-loving population that can't go to the theater as often as they might like or simply prefer to watch at home. Those consumers, Shell added, typically miss the theatrical window and have to wait for a title to appear on another service months down the road, so money is being left on the table.

"The film business really stayed stuck in the mud on the traditional kind of windowing basis," Shell said. "That is not the right way to maximize what is the Rolls Royce content of the entertainment business."

WarnerMedia's Warner Bros is taking a much more aggressive stance as it releases Wonder Woman 1984 concurrently in theaters and on HBO Max on Christmas Day, and will do the same with its full 2021 slate.

"AT&T is taking a different strategy," Shell said. "But anything that, in my opinion, collapses windows  I think it's going to add value to the whole business. And I think theaters are going to be more than fine over the long term."

His hope is that the end of the pandemic  whenever that will come  will spark a "Roaring Twenties effect."

"I think people are going to want to leave their house, whether it's to go to a sporting event, or a concert or a restaurant, or hopefully a theme park, and certainly to the movie theater," he said.