It's no secret that cable operators and telcos of all sizes have adopted a "broadband-first" stance that emphasizes high-margin, high-speed Internet service and effectively relegates pay-TV to the back seat.

But streaming video services, a market that's now teeming with dozens of virtual multichannel video programming distributors (vMVPDs) and subscription VoD services, remain a key reason why many consumers are connecting to speedy broadband offerings in the first place. At the same time, though, the sheer volume of OTT video service options on the market makes it a challenge for consumers to figure out which ones best suit their entertainment needs as well as the size of their pocketbooks.

MyBundle.TV, a privately funded company started in 2019, has been keying on this trend, initially targeting it with a free algorithm-driven recommendation tool that helps consumers figure out which streaming services best fit their needs according to their personal preferences and locations (based on zip codes). The company has since expanded its business to include a streaming marketplace and subscription management platform that's been customized for a growing group of cable operators and other broadband service providers.

The company's relatively new streaming marketplace is being used to power websites run by cable operators and ISPs that help broadband customers pick and choose which streaming services appear to be the best fit. MyBundle.TV's platform can also be configured to factor in results from the operator's own pay-TV service. 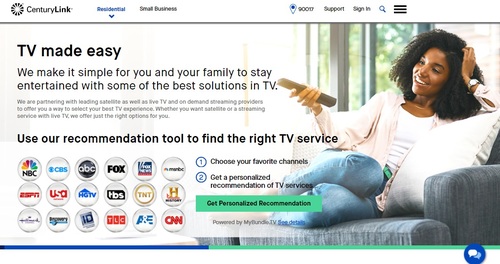 CenturyLink is among a growing group of broadband service providers that are using MyBundle.TV's platform to generate personalized video service recommendations.
Click here for a larger version of this image.
(Image source: CenturyLink)

That idea has already caught on with more than two dozen US broadband service operators that, together, serve about 5.7 million customers. That group spans the board from tier 1 on down, including CenturyLink, C Spire, WideOpenWest, EPB, MetroNet and Copper Valley Telecom, among others.

Here's a fuller sampling of cable operators and service providers that have connected with MyBundle.TV's to build streaming marketplaces for their broadband customers:

Table 1: A sample of service providers that have connected with MyBundle.TV

Of that group, WOW, which has adopted a broadband-first strategy, recently acknowledged that it expects to shed more than half its pay-TV subscriber base in the coming years.

MyBundle.TV's streaming marketplace "is about going beyond live TV and a world beyond Netflix, Amazon and Hulu," Jason Cohen, CEO and co-founder of MyBundle.TV, explained.

He estimates that the company's platform generates results from an array of more than 150 streaming services. MyBundle.TV also has affiliation agreements, along with a few more direct relationships, with a group of roughly 40 streaming services. But Cohen stresses that MyBundle.TV strives to be fiercely independent, noting that agreements with various OTT video players don't affect the streaming service combinations that are presented to users based on their preferences and other elements that underpin their personal profiles.

"Our view is ... it's about being agnostic," Cohen said. "It shouldn't matter what kind of device you signed up for. The consumer comes first."

While MyBundle.TV's consumer-facing recommendation tool is free, the company gets paid a monthly technology fee by its service provider partners and receives a share of the revenues generated by their customers who subscribe to services via the streaming marketplace. Cohen said the system also helps its service provider partners generate leads and add new broadband customers.

"The future is all about that streaming marketplace and subscription management platform," he said.

Other operators seem to agree with this notion. Comcast, for example, is ramping up its role in the aggregation and subscription management areas with X1 and Flex, its streaming platform for broadband-only customers. Additionally, Charter Communications envisions playing a similar role with its IP-capable Worldbox platform.

Cohen notes that MyBundle.TV's partnerships program has been picking up steam in the last four to five months as operators continue to size up their role in an evolving pay-TV and premium streaming landscape. While some are seeking help to provide broadband subscribers with streaming options, others are looking to transition off their existing pay-TV services.

"Everybody is thinking broadband-first," he said.

MyBundle.TV isn't the only company focused on this idea or this segment of the market. While there are key differences in how they use their respective tech and tools to help consumers navigate the streaming marketplace, other players include CobbleCord, Suppose.TV and Reelgood.