After a successful first gig, most groups start planning a second.

Virgin Media has already switched on a gigabit-speed service for about 3.7 million UK homes. Technicians at the British cable operator now see a way to double those speeds in what they are calling "Gig 2."

Trials carried out in the town of Thatcham in the south of England, and announced today, delivered a service of 2.2 Gbit/s to homes over the DOCSIS 3.1 technology that Virgin Media is using. That is about 34 times the country's average connection speed.

It would instantly catapult the UK to the top of most broadband league tables if it became widely available. And Virgin Media reckons a Gig 2 upgrade could be done without breaking the bank. 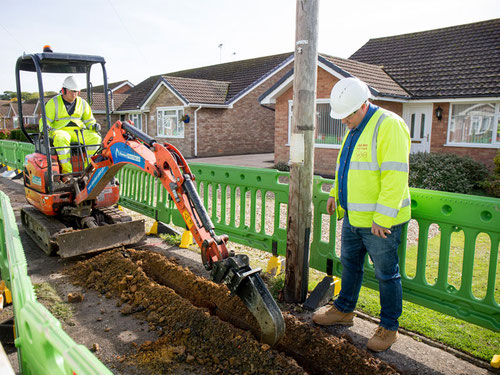 Virgin Media reckons it can avoid these digs when upgrading to higher speeds.

For its Gig 1 deployment, Virgin uses half an OFDM block and bonds this with its older DOCSIS 3.0 technology. Adding the second block on DOCSIS 3.1 "grows the pool of capacity," Geary tells Light Reading. "That is a new thing we've been configuring and testing."

It appears to give Virgin a big advantage over BT, the UK telecom incumbent, which must dig up roads and install fiber when upgrading from the copper-based broadband technologies that still serve most homes.

"There is no civil engineering work required with this," says Geary. "We have a network pathway beyond 1 gig to make sure we keep ahead of customer demand."

No commercial thunder
And yet Virgin Media is not about to activate a 2Gbit/s service commercially.

Across a network that now reaches more than 15 million premises, most homes have no gigabit-speed option.

That will change next year, when Virgin is due to complete its Gig 1 upgrade for every single household. But Gig 2 is for the "years to come," says Geary. "We have to see how the Gig 1 approach goes."

The absence of civil engineering work does not mean upgrades are easy for the cable operator, a part of the Liberty Global empire.

Some cables must also be replaced. "It has been quite a journey," says Geary.

Just like BT, Virgin is also building anew. While it can boast a speed advantage over its main rival, its network remains unavailable in many parts of the UK. Virgin is working to extend coverage through an investment program it calls Project Lightning.

First announced in early 2015, the plan was to reach an additional 4 million premises by this year, giving Virgin access to nearly 17 million in total.

But Lightning has clearly fallen well short of the original expectations. So far, Virgin has been able to add about 2.3 million premises to its footprint, including 93,000 in the April-to-June quarter.

In the meantime, Lightning has gobbled up much of the roughly £1 billion ($1.3 billion) that Virgin invests in capital expenditure every year.

Even so, if consumers genuinely care about connection speed, Virgin now has an enticing offer in areas where it competes against BT and resellers of the BT service. Geary also plays down any suggestion that cable might struggle on the uplink.

"I am pretty comfortable with a 10:1 ratio with a residential use case," he says, pointing out that most traffic growth has been on the downlink side in the Netflix era.

A gigabit-speed service gives Virgin a generous 100 Mbit/s on the uplink. During the Thatcham trials, it achieved uplink speeds of 214 Mbit/s.

Whether Gig 1 upgrades carried out so far have brought commercial benefits for the operator is unclear.

As in mobile, there has been little evidence of a correlation between faster speeds and higher customer spending. Many subscribers care more about good levels of customer service, technical reliability and extra features.

Yet Virgin did pick up another 24,000 cable customers in its recent second quarter, giving it nearly 6 million in total.

That compared with a loss of about 6,000 subscribers a year earlier and was Virgin's best quarterly performance since 2016.

An improvement in those numbers during the Gig 1 rollout would be an encouraging signal indeed.