Cable networks are set for a much-needed upstream boost

Interest is growing in an advanced modulation scheme that will help cable operators vastly improve the efficiency of their upstream as they pursue "mid-split" and "high-split" upgrades to expand the amount of upstream-dedicated spectrum.

That modulation scheme, Orthogonal Frequency Division Multiple Access (OFDMA), is supported in DOCSIS 3.1 as well as the new DOCSIS 4.0 specifications. However, trials and deployments of OFDMA have been limited in recent years because cable operators have not had much upstream spectrum to spare for OFDMA, due to their existing reliance on single-channel QAM (SC-QAM) channels used for the DOCSIS upstream.

That situation appears poised for change as operators start to expand the amount of spectrum they dedicate to the upstream (5MHz-42MHz, in most cases) through a mid-split or high-split that would raise the upstream ceiling to 85MHz or 204MHz, respectively. The new DOCSIS 4.0 specs also pave the way for the upstream spectrum on the hybrid fiber/coax (HFC) plant to operate at even higher frequency levels – 300MHz, 396MHz, 492MHz and even 684MHz.

While Orthogonal Frequency-Division Multiplexing (OFDM) has been used in the downstream for DOCSIS 3.1 for years, deploying OFDMA for the D3.1 upstream is "late to the party" due to spectrum scarcity in the upstream, Rex Coldren, principal access architect at Vecima Networks, said Thursday during a "LiveLearning" webinar hosted by Light Reading in conjunction with SCTE/ISBE. "But it is coming to the party."

Coldren said OFDMA becomes more practical as operators start to expand to a mid-split, and becomes "essential" for a high-split upgrade.

Both split upgrades provide lots more upstream headroom. Full OFDMA in a mid-split will provide roughly two times the capacity that an operator could get by filling the same spectrum with SC-QAM. Applying OFDMA in a high-split would set up cable operators to deliver upstream speeds of 1 Gbit/s and enable them to match the speeds delivered in the DOCSIS 3.1 downstream path.

In another potential future scenario, a DOCSIS 4.0 network with a 684MHz "ultra high-split" would generate about 6 Gbit/s.

The need for OFDMA in the upstream has become more acute during a pandemic that has sparked a surge in data usage as people worked and schooled from home. According to the NCTA's latest COVID-19 Dashboard, which tabulates data from several US cable operators, peak upstream usage is up more than 50% since March 2020, and peak downstream usage has climbed almost 30% during that timeframe. 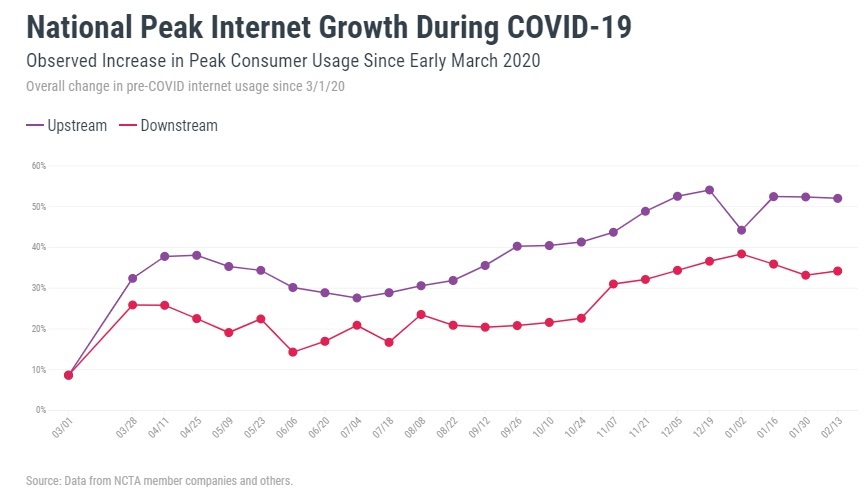 Testing the mettle of OFDMA

Although the use of OFDMA in DOCSIS 3.1 networks is not yet widespread, there have been flashpoints. Cisco, for example, has connected with operators such as Midco and Blue Ridge Communications on field trials and small deployments in recent years.

In the Midco field trial, started in 2017, the operator had some spare upstream capacity on plant with a 85MHz split. While the use of two SC-QAM channels generated about 25 Mbit/s upstream, the 45.5MHz of spectrum used for the OFDMA piece pumped out about 365 Mbit/s. By cross-bonding the OFDMA and SC-QAM channels, the trial generated about 415 Mbit/s, Jason Miller, technical marketing engineer, cable access, at Cisco, explained.

The recent 2019 deployment with Blue Ridge involved a more spectrum-limited situation, as the service provider operated plant with a more traditional 42MHz upstream split. The use of just 13MHz of OFDMA spectrum delivered about 100 Mbit/s, the same that could be produced through the use of four 6.4MHz-wide SC-QAM channels. By combining two SC-QAM channels with the 13MHz OFDMA channel, Blue Ridge was able to put out 150 Mbit/s in the upstream.

Among takeaways, Miller suggested that operators should avoid deploying OFDMA below 10MHz, a segment of spectrum that is prone to noise and poor performance.

While OFDMA provides a way for cable to offer symmetrical speeds, it also gives operators the ability to run upstream operations higher in the spectrum and enables them to mix and match with single-carrier QAMs as needed. That's important for a migration period in which operators will be running both DOCSIS 3.0 and DOCSIS 3.1 modems, explained Robert Flask, Viavi's head of product line management and access instrument solutions.

Although OFDMA is more flexible and efficient than SC-QAM, he stressed that common practices still apply to keeping the plant clean.

But the introduction of OFMDA, along with a move to a distributed access architecture (DAA), network virtualization and the pursuit of a grander "cable cloud evolution," will also add more complexity to the HFC network and drive the need for more automation, Rob Wilmoth, chief architect, service provider team, Red Hat North America, said.

The big benefit is that the physical infrastructure will be in place, providing opportunities to tap into automation capabilities that, for example, will enable operators to execute firmware updates of the modems as they move from one DOCSIS release to another, Wilmoth added.