Discovery Communications didn't make any grand subscriber predictions for its new, direct-to-consumer streaming service – Discovery+ – but analysts believe its penetration rate will be helped along by its US partnership with Verizon, in addition to a globally focused deployment strategy.

ISI Evercore said it assumes Discovery+ will add about 15 million subscribers in 2021, helped by an approximate 30% penetration from the Verizon agreement, plus an additional 8 million global net adds. ISI Evercore sees that slowing down to 5 million net adds in 2022 as the Verizon partnership rolls off. 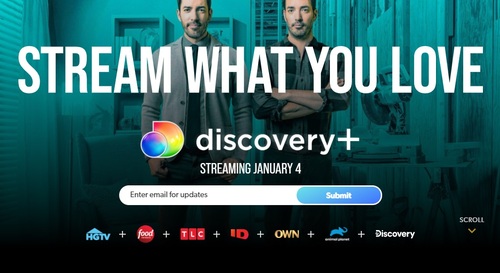 Industry-watchers believe that Discovery+ will appeal to superfans in the US and take on the kind of slow and steady progress that has been seen so far with CBS All Access.

Again, these are all assumptions. "Given that Discovery did not provide long-term financial targets, analysts and investors will have to determine on their own if Discovery will have a big enough lifeboat to survive and thrive in the rough waters of a declining linear TV universe," Michael Nathanson, analyst with MoffettNathanson, explained in a research note.

Discovery expects Discovery+ to have a domestic addressable market of at least 70 million homes, and roughly 400 million globally.

Analysts also wonder if Discovery+'s success will follow a slow and steady path like CBS All Access (a service that's big with "Star Trek" fans but will expand in early 2021 when it is rechristened as Paramount+), or take a rocket ride like Disney+, which has rapidly swelled to more than 73 million subs worldwide. They seem to agree that Discovery+ will end up being big of both, depending on the region.

"In the very crowded U.S. market, CBS All Access  is more likely a better analogy for Discovery+ as it serves both super fans of CBS and a sub-set of cord-cutters," Nathanson explained. In the US, he sees Discovery+ reaching "third-tier" penetration levels, behind first-tier service Netflix and a set of services in the second tier: Amazon Prime Video, Hulu (the SVoD service) and Disney+.

Internationally, he sees Discovery+ being a more differentiated and incremental service that would more closely mirror what Disney+ brings to the table.

Colin Dixon, founder and chief analyst at nScreenMedia, agrees that Discovery+ could see a bifurcated level of appeal in the US and abroad.

Dixon sees Discovery+ as a harder sell in the US, as pay-TV customers already have access to plenty of Discovery content on linear channels, VoD and what's stored in their DVRs. A subset of superfans might turn to Discovery+ to augment what they get with pay-TV.

Meanwhile, cord-cutters have been living without a lot of that kind of content and have already gravitated to YouTube or other streaming services, such as CuriosityStream, to get their fill of the programming genres offered by Discovery+.

"I think it's only the hardcore fans that have pay-TV that will pick this service up [in the US]. I think it's a really tough sell," Dixon said, but likewise believes that Discovery is smart to add a bunch of original fare for the new streaming service.

But Dixon expects the story to be different in a market like Europe, where Discovery+ will feature live sports, including Eurosport and Olympics coverage, and have a greater appeal among consumers who have jettisoned or simply don't want a traditional pay-TV service.

Discovery+ "will pick up a ton of subscribers" heading into the 2021 Tokyo games, said Dixon, who expects the programmer to have an easy time converting Dplay subscribers to Discovery+. "I like the story better for Discovery+ in Europe that I do in the US."

Back to the US, a portion of Discovery+'s growth will come from a Verizon deal that will provide a free year of the new SVoD service to customers on certain Fios and mobile service tiers, and up to six months of Discovery+ on some other service tiers. MoffettNathanson and ISI Evercore both estimate that about 21 million Verizon accounts are eligible for the Discovery+ promotion in some form.

Discovery set a January 4, 2021, US launch date for Discovery+. The ad-supported service will fetch $4.99 per month; an ad-free version will run $6.99 per month. The service will debut with more than 55,000 episodes, including more than 50 original titles and 150 hours-plus of exclusive content. Discovery estimates that Discovery+ will offer more than 1,000 hours of original fare in year one.