Comcast has allowed its HBO customers to access the HBO Max app for mobile devices since late May, but this latest move adds integrated support for the Internet-delivered SVoD service on X1 and Flex boxes connected to TVs. 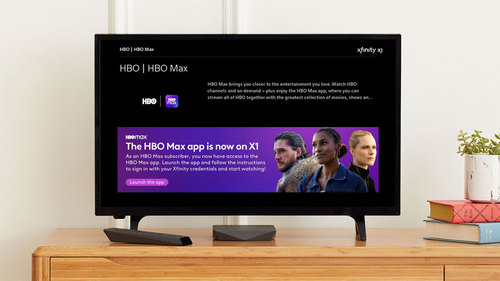 Comcast has begun to roll out the Internet-delivered HBO Max app on X1 and Flex boxes.
(Source: Comcast)

The timing of that integration will also ensure support ahead of the premiere of Wonder Women 1984, a Warner Bros film set to be released simultaneously on HBO Max and in theaters on December 25. In a controversial move that has Hollywood in a tizzy, Warner Bros will release its full 2021 film slate in this hybrid HBO Max/theater window.

Update: Comcast noted that it will make Wonder Woman 1984 available in the 4K, HDR 10, Dolby Vision and Dolby Atmos to X1 and Flex customers with devices that support those formats.

The integration comes almost seven months after the May 27 national launch of HBO Max. Comcast has been teasing the launch of the app, as branding and tiles for HBO Max have been cropping up on X1 for more than a week.

Adding HBO Max will help round out Comcast's support for many of the most popular premium subscription- and ad-based streaming services. Both X1 and Flex already tie in apps such as YouTube, Hulu's SVoD service, Pluto TV, NBCUniversal's Peacock, Amazon Prime Video, Spotify and CBS All Access (to be rechristened as Paramount+ in early 2021). Last week, Comcast announced a deal with Disney that will pave the way for the integration of Disney+ and ESPN+ in the first quarter of 2021.

The deployment on X1 and Flex ticks off another platform box for HBO Max, which still lacks a deal with Roku. HBO Max "activations" have risen to 12.6 million, up from 8.6 million at the end of Q3 2020, AT&T CEO John Stankey told investors last week.