Google is hitching its wagon to Netflix to help drive sales of its latest, greatest streaming device  Chromecast with Google TV.

The new Chromecast with Google TV is on sale for $49.99 on a standalone basis, or $89.99 when the device is bundled with six months of Netflix's two-stream "Standard" streaming plan if purchased via the Google Store. Google notes that the bundle is available to both new and current Netflix subs and that the Netflix piece alone carries a value of $77.94.

Besides supporting the new Google TV experience, another big change for Google's much more powerful Chromecast streaming player is that it is underpinned by the Android TV OS and matched with a voice-capable remote control (previous generations of the Chromecast rely on navigation and content casting from mobile devices).

You asked, we listened#Chromecast has a little help coming your way. And, it even comes in three different colors. Watch @YouTube and @Netflix and get help with just a press of the Google Assistant button.#LaunchNightIn https://t.co/E75uqzpThV pic.twitter.com/X2gW6RgvR3

As a new layer on top of the Android TV operating system, the Google TV experience/interface also aims to break down the silos of individual streaming apps and integrate and organize shows and movies from them on one screen  something that Comcast has been particularly adept at with its X1 and Xfinity Flex platforms and a feature that Apple has focused on with the Apple TV app.

A key aim of Google TV is to recreate some of Google's core search capabilities along with the ability to personalize the way users discover content and get content recommendations, Shalini Govil-Pai, GM of Android TV, explained today during Google's "LaunchNightIn" event. 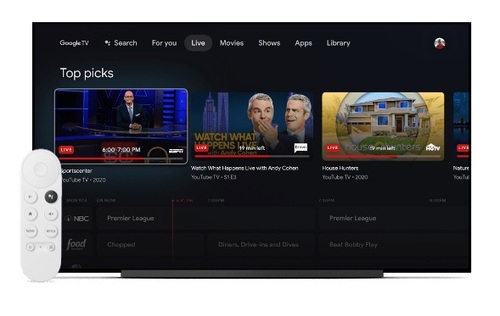 The new Google TV system can scan across apps to generate and present personalized, curated lists of TV show and movie recommendations.

The new Google TV platform also allows users to create and expand watch lists from their laptops or phones and have them appear on the TV screen, as well as set DVR recordings remotely, she said. Google TV has also been made to work with Google's lineup of Nest cameras and doorbells.

While Google TV debuts on the new Chromecast today in the US with launches in more countries later this year, it will also be brought to other types of devices in the Android TV ecosystem.

It's not yet clear how the new Google TV product set will be extended to Google's activity with cable operators and other service providers that have latched onto devices that run the Android TV Operator tier. But Google TV and the new Chromecast are entering the picture as the retail streaming device market kicks into high gear for the fall holiday season.

Roku this week introduced its new high-end Ultra player and a Streambar that bakes in a 4K-capable streaming player, and Amazon has also ushered in its latest lineup of Fire TV devices.

Comcast has yet to make an out-of-footprint retail play with its new Xfinity Flex platform, but did confirm recently that it is exploring ways to bring its X1 platform to smart TVs

TiVo's also in the mix with its new Android TV-powered Stream 4K device, which has upped its presence at Wal-Mart stores .