Cable One must become an 'acquisition machine'  analyst

Cable One's playbook centered on de-emphasizing video and focusing on residential broadband and business services did its job in Q4 2020, as the operator saw margins and ARPU climb yet again.

But that playbook, which has caused Cable One's valuation to excel well beyond its US MSO peers, will need to be fed with more and more acquisitions, reckons a leading industry analyst.

"The only path forward for Cable One to grow into and sustain its stratospheric value is to become an acquisition machine, rolling up smaller operators and then applying the Cable One model  in the hopes that the combined entity will sport the same valuation Cable One had before," Craig Moffett, analyst with MoffettNathanson, speculated in a research note in the wake of Cable One's Q4 results.

"Cable One is no longer a small cable operator, at least by enterprise value," Moffett wrote, citing a market cap of about $12 billion market cap alongside $1.6 billion of net debt.

But he also views Cable One's lofty valuation as a "blessing and a curse," as its ability to sustain it will be a challenge. For now, that valuation has been fueled in part by widening margins, aided by a mix shift from video to broadband and rising broadband ARPU as more customers move to more expensive broadband-only modeling, as well as falling non-programming costs as revenues increasingly pivot to broadband.

Cable One is doing the right things to grow its valuation organically, but that path "is a long slog," Moffett warned. "To generate acceptable returns for shareholders from here, they need to keep doing deals." The big question is what deals are still out there at valuations that Cable One can stomach and still get the right return on.

Cable One CFO Steven Cochran acknowledged that multiples have soared, but said they are justified among business that are being led by broadband and share Cable One's growth profile. According to Moffett, Cable One's recent deal for Hargray was for 17.2x EBIDTA, while Charter Communication and Altice USA currently trade for just 11.7x and 9x, respectively.

Cochran said Cable One is "comfortable" with the multiples it's been paying, confident that Cable One can continue to apply its model to its acquisitions.

"There is no sign at all that Cable One's margin expansion is slowing. Cable One is small, but their larger peers are watching. And cheering," Moffett explained.

Count WideOpenWest (WOW), an operator that's adopted a similar "broadband-first" strategy expected to result in a big decline in its pay-TV base in the years ahead, in Cable One's cheering section. WOW was "excited" to see the valuations placed on Cable One's Hargray deal and Astound Broadband's sale to Stonepeak Infrastructure Partners, WOW CFO John Rego said this week. WOW didn't have any new M&A activity to share as it remains focused on running the business, "but I do like the valuations," Rego said. 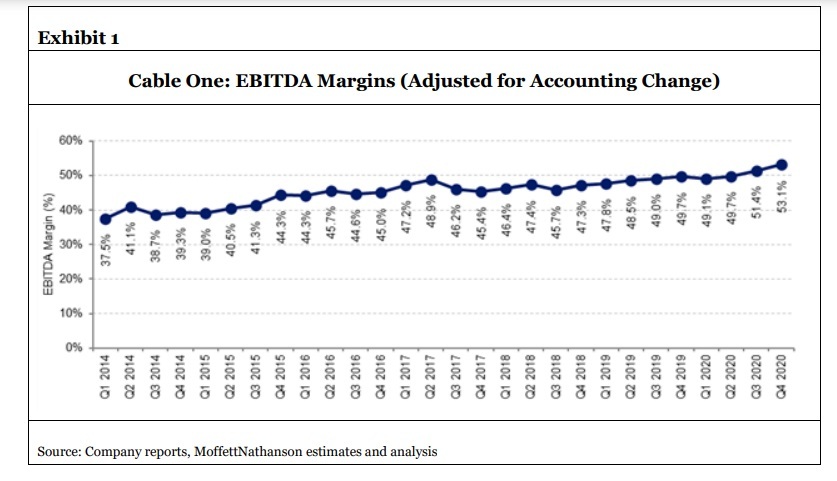 Cable One's residential ARPU, at an industry high of $75.65, also rose 5.5% year-over-year thanks to its continued emphasis on broadband. Video ARPU, at $102.72, is also high compared to Cable One's peers, due mainly to price increases that "fix" video profitability, Moffett said. 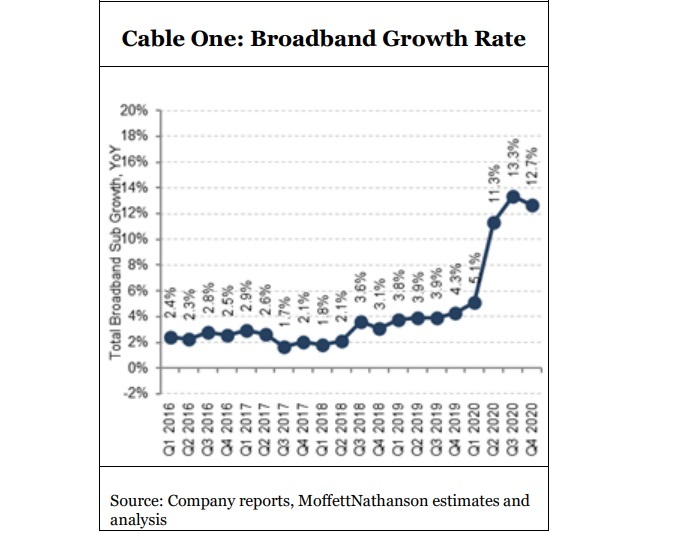 Cable One attributes rising ARPU to customers taking faster, more expensive tiers along with strong sell-in of an unlimited data option that costs an additional $40 per month. The operator stressed that it does not get much of a bump from its usage-based data policies that charge extra when residential broadband subs exceed their monthly allotments.

On Thursday's call, Cable One CEO Julie Laulis noted that more than 70% of Cable One's customers elect a package that delivers more than 100 Mbit/s, and that the bulk of them are paying a full rate.

"They also elect to take unlimited data packages, which drives the ARPU," she said. "Those that want more or use more, they pay more."

Cable One, which is in the middle of DOCSIS 3.1 network upgrades, saw average data usage grow by 37%, to nearly 500 gigabytes per month. However, there's still some headroom there; Laulis said its network utilization peak remained relatively low – 23% on downstream traffic and 19% for upstream traffic.

Cable One's Q4 subscriber results also bore out its strategy. The operator tacked on 11,000 broadband subscribers compared to adds of 4,900 a year earlier, ending the quarter with 777,000. Cable One also has lots of headroom for broadband growth, as data penetration stood at just 37.3% at the end of 2020.

"Video losses have been, as the saying goes, a feature, not a bug," Moffett noted. "With limited fiber-based competition, their ceiling is arguably the highest."

"We've got room to grow, and we're doing it," Laulis said.